A controversial political figure who stood for Ukip and who now claims to be Tory had links to a leading member of an extreme far right group banned under terror laws.

Jack Neill – pictured above on the left – stood for Ukip in Gordon Brown’s old seat of Kirkcaldy and Cowdenbeath at the 2015 general election but he now claims to be a member of the Scottish Conservatives, which the party denies.

We can also reveal that Neill was a friend of Ruiadhri McKim of the outlawed neo-Nazi group, Scottish Dawn, and we obtained a number of photographs of them together.

Earlier this year, we secretly filmed McKim who revealed that Scottish Dawn had links to the banned neo-Nazi group National Action.

Our investigation was published in tandem with the Daily Record and last week the UK Government banned Scottish Dawn calling it “a vile racist, homophobic and anti-semitic group which glorifies violence and stirs up hatred while promoting their poisonous ideology.’

Neill was given a key role when former Ukip leader Nigel Farage and the party’s ex-Scottish leader David Coburn launched the party’s Holyrood manifesto at an Edinburgh hotel in April, 2016.

He was also at the centre of controversy last year amid allegations of racism after a photograph emerged of him wearing a clown nose and with his face blacked up.

The picture was condemned by race equality campaigners but Neill denied allegations of racism.

Earlier this month Neill made headlines again after an incident at George Square in Glasgow during a pro-independence rally.

Neill and another man were allegedly chased and assaulted for flying a Union Flag.

Some 1500 people were estimated to have gathered in George Square for the Hope Over Fear event to remember the 2014 Scottish independence referendum.

Neill was the administrator of a pro-Union Facebook page called Union Jackers. 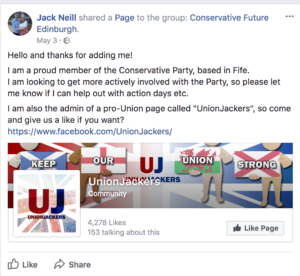 On 3 May, this year, he shared the page with a group called Conservative Future Edinburgh and posted: “I am proud member of the Conservative Party, based in Fife. I am looking to get more actively involved with the Party, so please let me know if I can help out with action days etc. I am also the admin of a pro-Union page called ‘UnionJackers’, so come and give us a like if you want?”

In another post on 4 May, Neill urged people to vote Conservative at the local elections.

He wrote: “Vote for change, vote for Scotland, vote for Britain, vote for unity, vote Conservative!’

However, the Scottish Conservatives told The Ferret that Neill is not a party member.

As a mixed race man myself, I take a hardline stance against racists. There's no place for racism in our modern, progressive and forward-thinking society. Thank you. Jack Neill

When asked about his links to McKim and whether he had ever been a member of Scottish Dawn or National Action, Neil strongly condemned racism and his former friend.

He said: “I used to know Ruaidhri through UKIP as we were both a part of the youth wing in Scotland.

“When I found out he was a Nazi I disassociated myself from him.  As a mixed race man myself, I take a hardline stance against racists. There’s no place for racism in our modern, progressive and forward-thinking society. Thank you.”

A spokesman for the Scottish Conservatives said: “I’ve checked and he’s not a member of the party. Were he to apply, we wouldn’t accept him either in light of this.”

It puts the neo-Nazi group alongside other banned terrorist organisations such as Islamic State and the IRA.

Rudd said that National Action had been trying to get round its ban last December by simply changing its name to Scottish Dawn and NS131 (National Socialist Anti-Capitalist Action) which was active in England.

The ban means that being a member – or inviting support for – Scottish Dawn, National Action and NS131, is a criminal offence carrying a sentence of up to 10 years’ imprisonment.

Rudd said: “National Action is a vile racist, homophobic and anti-semitic group which glorifies violence and stirs up hatred while promoting their poisonous ideology and I will not allow them to masquerade under different names.

“By extending the proscription of National Action, we are halting the spread of a poisonous ideology and stopping its membership from growing – protecting those who could be at risk of radicalisation.’