Left wing group Antifa filmed its members converging on a pub in Glasgow where Generation Identity (Alba/Scotland) met in July.

Antifa claim that Generation Identity is a neo-fascist group and that one of its members is a neo-Nazi from Poland.

Generation Identity has also been compared to the so-called “alt right” in the US which was involved in violence last week in Charlottesville, when Heather Heyer was killed during street violence that made global headlines.

It is part of the Identitarian movement – now spreading across Europe – which started in France and is based around nationalism.

The movement opposes Islam and immigration but claims it is not linked to neo-Nazis or fascist groups.

Describing itself as a “patriotic youth movement that promotes the values of homeland, freedom and tradition”, Generation Identity also says it is committed to “peaceful activism, political education, and community and cultural activities”.

Photos on the Facebook page of Generation Identity (Alba/Scotland) show that members have posted stickers around George Square, Glasgow, and on the Royal Mile in Edinburgh.

A poster was left at Edinburgh Castle saying: “Make Love and Defend Europe”.

Generation Identity is currently involved in the Defend Europe campaign which is an attempt by far right activists to stop NGO ships from rescuing refugees in the Mediterranean Sea.

Antifa said in a statement posted with its video that Glasgow-based activists and members of militant anti-fascist groups became aware that Generation Identity was to hold its first meeting in Glasgow on Tuesday 25 July.

The statement continued: “Generation Identity are a neo-fascist, alt right organisation based in Europe, that hide behind suits, and attempt to be seen as a militant youth group, that plan ‘to defend Europe’ and split our communities by calling for the repatriation of immigrants.

“Two of their main organisers and what seemed to be their ‘security’ made a sharp exit when one Glasgow activist decided to say hello, and take pictures of his new friends.

“The activists then discussed with what was left of the group, the rights and wrongs of this new organisation.

Antifa also said there was a heated exchange with a “well-known Polish neo-Nazi hard nut”.

Generation Identity are a neo-fascist, alt right organisation based in Europe, that hide behind suits, and attempt to be seen as a militant youth group, that plan 'to defend Europe' and split our communities by calling for the repatriation of immigrants. Antifa

Generation Identity was asked for a comment in response but did not reply.

A statement on its website says : “We are concerned with the preservation of the cultural heritage that has characterized our countries and the continent of Europe over many thousands of years.

“We do not want to break this chain. That’s why we see it as our mission to argue for a peaceful and secure future within Europe.

“We want to continue along the path forged by the ethno-cultural tradition of our ancestors.” 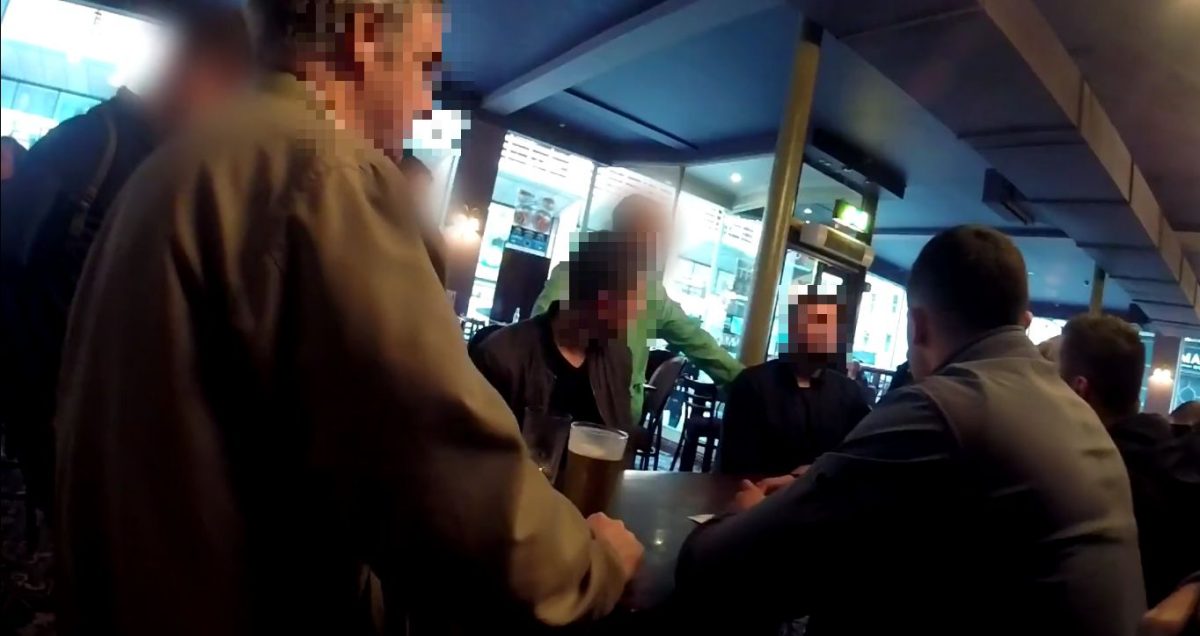 On Defend Europe, a statement on Generation Identity’s website says: “These criminal NGOs are collecting donations to rent ships and to pick up the illegal migrants in front of the Libyan coast.

“In order to achieve their goal they don’t even shy away from working together with human smugglers. They are nothing less then a part of the international human traffick ring and the migrant business.

“Therefore it is time to stop these criminals.”

An undercover investigation by The Ferret revealed recently that neo-Nazi group Scottish Dawn are influenced by Generation Identity.

A Scottish Dawn activist was secretly filmed talking to our undercover reporter about Generation identity.

He said: “…it’s a patriotic nationalist organisation but without all the old fashioned skinhead… basically. It’s like a new (..) movement for young people that isn’t attached to all this past…

Another Scottish Dawn member covertly filmed, using the alias ‘John’, said: “We’re quite influenced by them.”

Neil Davidson, a Sociology Lecturer at Glasgow University and expert on the far-right, compared Generation Identity to the new far right in the US.

Davidson said the so-called alt-right in America does not openly call for violence against migrants but “spews out all this stuff which incites hatred and can lead ‘lone wolves’ to carry out attacks which the alt-right can then deny responsibility for”.

People are made of stories, not atoms. Generation Identity

Asked about Generation Identity’s Defend Europe campaign in the Mediterranean, he said: “I think that kind of thing is getting towards the territory of a fascist organisation.”

However, Davidson added that he does not view Generation Identity as an immediate threat in Scotland.

He said: “They may now be thinking about online presence as a way of following the American example as a means of trying to build support. I would think from their point of view that’s a more realistic prospect of getting attention and street mobilisation”.

Unite Against Fascism said Generation Identity are pan-Europeans and their strongest base is in France, “worryingly among young people”.

A spokesman added: “Although there are a few neo-nazis amongst them they appear to be more of a far right populist group. To my mind, based on their stated agenda (nativist preservation of European identity, anti-muslim etc), I would characterise them as white supremacists.”

However, the anti-fascist groups says on its website that the Identitarian movement is well known for its “provocative and controversial stunts, usually directed against Muslims and immigrants, with a view to raising funds, increasing their public profile and shifting public opinion”.

This story was published in tandem with the Daily Record.