Information on individuals barred from working with children will no longer be shared with Scotland’s criminal records disclosure agency after Brexit, ministers have been warned.

The revelation has sparked concern from child protection charity NSPCC Scotland, which called on the Scottish Government and the European Union (EU) to continue sharing information about people seeking to work with children to keep “future generations of children safe”.

The charity warned that countries have “a legal duty” to protect children and that crimes against them “increasingly have an international element”.

The Scottish Liberal Democrats said that ending such cooperation “plays into the hands of criminals who don’t respect borders.”

The Scottish Government’s director of children and families, Michael Chalmers, cautioned in a letter to Education Secretary, John Swinney, that “no action” would be taken to resolve the problem before Brexit, which cannot be resolved by Holyrood alone.

The letter, dated 10 August 2018 and obtained under freedom of information law, also acknowledges that in the event of a no deal Brexit, there will be “a deficiency for Scottish organisations recruiting EU nationals after the UK leaves the EU”.

Chalmers highlights that the European Communities Act 1972, which allows Disclosure Scotland to liaise with EU member states and other organisations seeking to recruit a Scottish national, will be repealed post-Brexit.

Therefore “no further requests from other member states will be received by Disclosure Scotland” as the legislation requiring ministers to comply with these requests “will be made redundant”, he says.

Similarly, requests made by EU nationals to work in a childcare position in Scotland from any of the 12 member states the UK has arrangements with are partly channelled through the European Criminal Records Information System (ECRIS), which is only accessible only to EU Member States.

The letter says Disclosure Scotland has made approximately two checks per day against the ECRIS database over the last 14 months, yielding “two pieces of information”.

In a House of Commons Home Affairs Committee report, EU expert Professor Steve Peers stated that UK access to ECRIS post-Brexit would be “a big ask, because other non-EU countries have not had access to it”.

Chalmers said that Scottish organisations will instead have to ask individuals for a Certificate of Good Conduct from their home judicial authority.

However, he said that the end of ECRIS access did not pass “the harm test”, which considers whether “a failure to fix the deficiency would cause particular harm to public health, public safety, economic prosperity or a an essential regulatory function.”

Chalmers said that bi-lateral agreements to share such information with Scottish Ministers post-Brexit would be sought. These agreements “would require at least one statutory procedure in parliament”.

Reacting to the letter, NSPCC Scotland said that the retention of access to existing databases and the European arrest warrant, which makes it easier to extradite criminals and suspected criminals between EU countries, was essential to the safety of children.

“Countries have a legal duty to protect child victims, and many crimes against children increasingly have an international element,” said a spokesman.

“In order to effectively tackle this and help keep future generations of children safe, we must retain access to existing databases and the European arrest warrant after Brexit. Additional information-sharing across borders about child protection concerns and specific health needs would also allow us to offer better help to children who need it.”

The Scottish LibDem justice spokesperson, Liam McArthur MSP, said that the letter is “yet more proof that Brexit is going to remove the tools that authorities need to keep people safe.”

He added: “It plays into the hands of criminals who don’t respect borders. There is absolutely no justification for cutting ourselves off from valuable cross-border resources. It would make it harder for our schools, youth clubs and sports teams to be certain about those applying to work with them.

“Nobody voted for this. We need to give the people the final say on the Brexit deal.”

A Scottish Government spokesman said that the issue was “yet another example of stark reality Brexit presents and that leaving the EU will damage Scotland’s interests.”

He added: “The advice was prepared alongside a range of other material to help ministers understand the various implications of the UK leaving the EU. While we do not expect that this issue will directly affect large numbers of people or make a substantive difference to our workforce planning, for those individuals involved that will be scant comfort.”

This story was based on documents released as part of The Ferret’s Brexit Papers project. You can search across more than 350 Brexit documents from Scottish public bodies largely obtained by freedom of information requests. 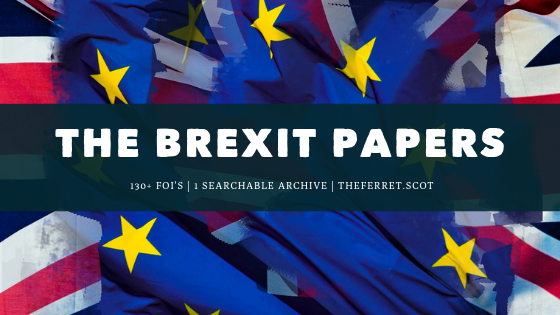