Claim 60 per cent of Scots farmers voted for Brexit, Tories and against independence is Mostly False

Scotland’s farmers are facing an uncertain future as the Brexit negotiations falter, with the National Farmers Union leader calling a ‘no deal’ EU exit an “armageddon scenario” for the industry.

Ferret Fact Service was asked to check a widely shared text image on social media in recent weeks which made four claims about farmers in Scotland.

The image appeared on to the page ‘Yes to an Independent Scotland‘ and has received more than 1,300 shares. It claims those in the farming industry voted against Scottish independence, for the Conservatives, and for Brexit. 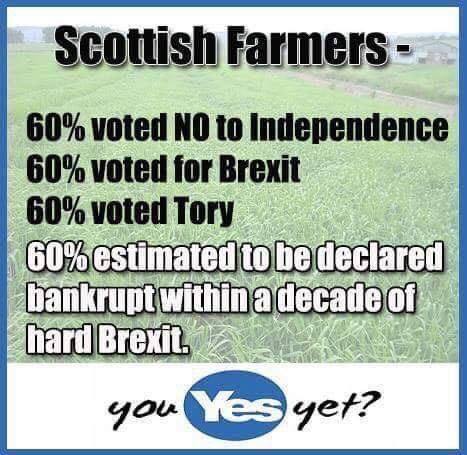 Scottish farmers – 60% voted No to Scottish Independence, 60% voted for Brexit, 60% voted Tory, 60% estimated to be declared bankrupt within a decade of Hard Brexit. Social media graphic

Ferret Fact Service looked at this graphic, and found its claims to be Mostly False.

The relationship between farming in the UK and the European Union has long been a complicated one. The Common Agricultural Policy (CAP), an EU policy to help support and subsiding farming in its member states, means that a proportion of the EU budget goes on paying farmers to mitigate falling food prices and volatility in the agriculture market.

In the early days of the common market CAP accounted for 80 per cent of its budget. After criticism for supporting overproduction, the policy was reformed and now accounts for a smaller proportion of spending.

In the UK, the policy has been controversial among farmers because the UK has received less in payments than it contributes, leading to complaints that British farmers are subsidising those in other EU nations.

A recent House of Commons report stated that CAP subsidies can “make up anywhere from 50-80% of a UK farmer’s income”.

The Department for Environment, Food and Rural Affairs (Defra) estimated that CAP payments represented an average of 55 per cent of farm incomes in 2014.

The claims in this graphic are based around polling done of the farming community about their views on Scottish independence, Brexit and their voting intentions in the general election.

The claims come in chronological order, with the claim that 60 per cent of Scottish farmers voted No in the 2014 Scottish independence vote.

No official breakdown is available for how different professions vote in elections and referenda, so the best evidence of the claims is in pre- and post-election polls done by organisations including the National Farmers Research Unit.

A survey in June 2014, before the September vote, showed that 71.8 per cent of farmers in Scotland wanted to remain part of the UK, while just 10 per cent supported a Yes vote. Farmers in other parts of the Britain were also polled despite not being eligible to vote, and the overall UK average was 65.1 per cent for No, with 8.6 per cent for Yes and a significantly portion (26.3 per cent) undecided.

Ferret Fact Service could not find any polls of farmers taken in the immediate aftermath of the vote, so it not possible to give a more up to date figure, but it appears that the suggestion that 60 per cent voted No is not based on any evidence.

The second claim is 60 per cent of farmers voted to leave the European Union in 2016. This appears to have come from another survey done before the vote by the trade magazine Farmers Weekly.

This poll was taken over a month before the referendum, and found 58 per cent of farmers in the UK were backing Brexit, with 30 per cent wanting to remain. However, this was a UK-wide poll, with Scotland highlighted as one of the least inclined areas to back Brexit.

Polling done by the same newspaper after the vote found that support had fallen, with 53 per cent of respondents said they had voted Leave.

On this count then, the graphic appears to have misattributed the wider pre-referendum poll to just Scottish farmers.

Now, moving on to another 60 per cent claim, this time farmers in Scotland voting for the Conservative party.

National Farmers Research Unit polled farmers across the UK to gauge their views ahead of the 2017 general election.

The organisation asked 1,064 UK farmers: “With the upcoming general election in mind, in your opinion which political party values the interests of UK agriculture the most?”

In Scotland, the most common answer was “None” (35 per cent), followed by the Scottish Conservatives on 28 per cent and the SNP on just 7 per cent.

Another survey by Farmers Weekly suggested 71 per cent of UK farmers intended to back the Conservatives, but no regional breakdown for Scotland was given.

So again, the statistics in the claim appear to be without foundation.

The impact of Brexit on farming in the UK has been widely discussed since the vote, with the potential of a ‘no deal’ scenario on the horizon.

A report from Informa Agribusiness Intelligence in 2017 suggested that 90 per cent of UK farms would collapse without a deal in place. However, leading Brexit figures have since suggested that subsidies would continue in some form.

Any estimates on the number of businesses that will be forced out of existence by a ‘no deal Brexit’ are extremely likely to be incorrect, as there are currently no reliable ways to model economic impact further than the immediate future because of the large number of variables and volatility of the economy after a serious political change.

The four claims in this graphic appear to be based on inaccurate and misleading assessments of polling by farming specialist publications and organisations. There are no official reports of how different sectors vote, and these claims rely on self-selecting surveys not done by reputable polling companies.