More than 4,200 public sector workers in Scotland have received controversial new counter-terrorism training from Police Scotland, The Ferret can reveal.

Workers in prisons, councils, universities, the NHS and the fire and rescue services have taken part in courses that critics have dubbed ‘provocative and cack-handed’.

Police Scotland oversees four different counter-terrorism courses in Scotland. All are part of the UK-wide PREVENT strategy, which aims to tackle extremism in the UK.

The strategy defines extremism as “vocal or active opposition to fundamental British values”.

The content of one of the courses, the PREVENT Awareness Training workshop, was heavily criticised recently after The Ferret published slides from a Glasgow City Council course.

It suggested anti-nuclear, environmental and animal rights activists should be regarded as potential extremists, alongside mention of perpetrators of terrorist attacks inspired by far-right and Islamist ideologies.

An official WRAP training script used in Scotland focuses largely on the threat from Islamist and far-right extremists, but it adds: “We could also have case studies with ISIL; Animal Rights; Environmental; Northern Ireland related terrorism; anything that encourages violence to influence political change – all are relevant to PREVENT.”

According to Police Scotland, 2,248 public sector workers have completed WRAP training in Scotland. The WRAP script also encourages those delivering the training to include local examples of extremism. 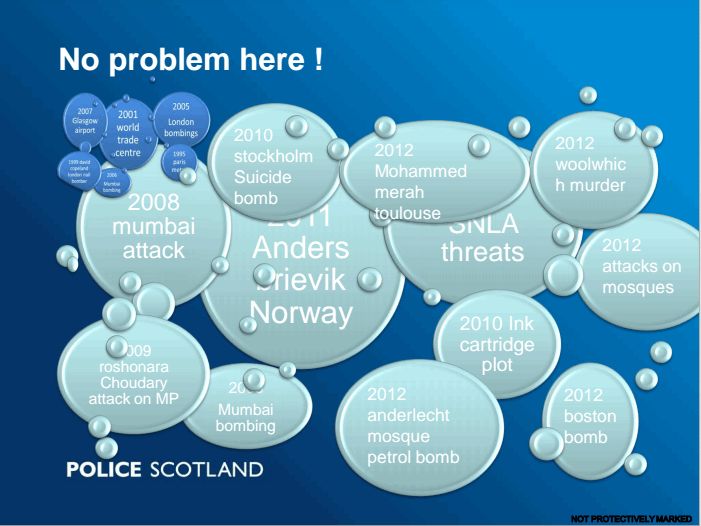 Further training slides obtained by The Ferret from Shetland Council show that police officers there suggested that Scottish nationalists could also be considered as potential extremists.

The Shetland slides refer to proscribed terrorist group The Scottish National Liberation Army as an example of a “real or potential threat.”

This counter-terrorism training has been received by 127 people on the islands, mainly council workers, according to the council.

Additionally, 101 staff in further and higher education establishments have received the training, along with 649 students.

The Scottish Government has subsidised this work by providing £274,222.76 in PREVENT funding to public bodies over the last two years.

Politicians at Holyrood have never debated the PREVENT programme , even though civil liberties groups and trade unions are critical of it.

Richard Haley of Scotland Against Criminalising Communities said: “PREVENT training cultivates an Islamophobic outlook and a general attitude of distrust towards the public and co-workers. So it’s rather disquieting to find that 4,000 public sector workers have already received this training.

“I suspect the reference to the SNLA is just another example of trainers picking examples of ‘terrorism’ that they think will illustrate the illusory dangers they wish to highlight. I doubt that it indicates a serious intention to put the SNLA or nationalism in the frame.

“But I think it points to a real risk that PREVENT might almost by accident encourage a provocative and cack-handed approach to sensitive local issues and create problems that at the moment hardly exist.

The group argues that the police and security services should have no role in shaping or monitoring political discourse in the UK.”

Police Scotland has refused to disclose their training materials, even via Freedom of Information requests, claiming that to do so would threaten national security and undermine the credibility of their counter-terrorism programme.

This is how radicalisers and sects operate. It is not how social workers and other public sector workers should behave. Richard Haley

Haley is critical of this stance too, and argues that keeping the details  of the training programme secret undermines its value.

He said: “The secrecy that appears to surround PREVENT training is very disturbing . It means that public sector workers are unable to discuss the material with others or place it in a wider context. This is how radicalisers and sects operate. It is not how social workers and other public sector workers should behave.

“The way to stop the material being discredited is to make it creditable. It is no solution at all to produce junk, present it to people under carefully manipulated conditions, and then insist on secrecy.

“Staff should refuse to accept training presented to them with a requirement for secrecy, and trade unions should back them in this.”

To date, the University and College Union (UCU) is the only trade union to formally object to the PREVENT programme.

It has briefed its members that: “The Prevent Agenda will force our members to spy on our learners, is discriminatory towards Muslims, and legitimises Islamophobia and xenophobia, encouraging racist views to be publicised and normalised within society.”

More recently, the UCU has also produced campaign posters with the slogan “I dissent from Prevent.”

In response, a spokesperson for Police Scotland denied that officers advised public sector workers to be suspicious of people expressing Scottish nationalist sympathies as a standard part of counter-terrorism training, but conceded that the reference to the SNLA was included in the Shetland slides as an example of a “real or potential threat”.

“Police Scotland officers do not routinely suggest people with Scottish nationalist sympathies may become extremists. The example of the SNLA is referred to in a local CONTEST awareness presentation, which does not focus on PREVENT.

“The slide provides around 15 examples of different real or potential threats and risks.”

“PREVENT is a safeguarding process which aims to identify vulnerability to any radicalising influences at an early stage, then allowing for appropriate support to be put in place to ensure the wellbeing of vulnerable individuals.”

They went to insist that official counter-terrorism training did not target any particular group of people.

“It is acknowledged that extremist ideologies can exist in many forms and can emanate from many different causes, there is no focus on any single group or community.

“The PREVENT message is one about safeguarding vulnerability, with every member of society having a role to play in highlighting concerns around vulnerability to ensure people receive appropriate support.”

A Scottish Government spokesperson said that they had not received any criticism of the PREVENT training programme and that there was no evidence that the training encouraged Islamaphobia.

“We are not aware of any such criticism of the delivery of the PREVENT strategy in Scotland but we have received positive feedback and support from our stakeholders for our approach,” they said.

“The Scottish Government’s approach to PREVENT is different to that of the UK Government and ensures delivery in Scotland reflects our communities, as well as the legal and institutional context.

“This means, for example, that the PREVENT strategy in Scotland is closely aligned to the well-established existing safeguarding protocols we have in place, to ensure the safety and well-being of individuals and communities.

“The Scottish Government has – from the outset – been clear that the PREVENT strategy in Scotland seeks to address all forms of violent extremism and terrorism whether that be international Al Qaeda/ISIL influenced or inspired terrorism, Northern Ireland related terrorism or domestic extremism, in particular the threat posed by the extreme right wing.

“There has never been a focus on one particular community and there is absolutely no evidence that PREVENT promotes Islamophobia.”

This Freedom of Information request gives more detail on the numbers of public sector workers that have received counter-terrorism training, and the type of course. Police Scotland subsequently provided further information on the numbers of students and staff that received training in the further and higher education sector.

The Ferret has redacted this document to prevent the release of the identity of a police officer named in the presentation.