Yes they can: taxpayers billed £23,000 for Obama dinner tickets

Taxpayer funded bodies paid up to £1,200 per head for senior staff and their private guests to attend an exclusive dinner with former US President, Barack Obama.

The Ferret has also established that the bash was attended by no fewer than five senior Scottish Government ministers, some of whom were funded to attend by private firms.

Tax funded organisations attending the event included the Scottish Environment Protection Agency, which sent six members of staff and four unnamed guests at a cost of £12,000 and two Scottish universities.

Anti-lobbying campaign group Spinwatch welcomed the £670,000 raised for good causes at the event but described the hospitality given and received by public servants as “problematic.”

The Green MSP Andy Wightman said it was hard to justify a public body spending £12,000 to send six members of staff “just to eat in the same room as Barack Obama.”

Charities to benefit from the money raised include UNICEF, Maggie’s Centres, the Beatson Clinic, Clic Sargent and CHAS.

But Derek MacKay, Secretary for Finance and the Constitution, and Michael Russell, Minister for UK Negotiations on Scotland’s Place in Europe, were both there as guests of Marie Macklin CBE.

Delighted to meet President Obama during his visit to #Scotland.'Hope is the belief that destiny will not be written for us, but by us …' pic.twitter.com/8H74e31pPg

Once said to be a public admirer of Donald Trump, Macklin’s private wealth is derived from the family property and investment firm, Klin Group.

Klin Group is worth £7.5m according to the most recent accounts filed at Companies House. It is said to have commercial interests throughout the greater Glasgow city region and Ayrshire areas.

Macklin sits on the Glasgow City Deal Regional Economic Leadership Board, a group that plays a “consultative” role in overseeing the use of £1.3bn public investment in the area.

Macklin also has the opportunity to inform Scottish government economic policy in another way. She sits with Derek Mackay, on the SNP’s Growth Commission – a body that reports direct to the First Minister.

In 2016 Diageo gifted the 23 hectare site of its former Kilmarnock bottling plant, along with £2m to the “Halo Project.” This pledge was matched with a further £2m from East Ayrshire Council.

Backers of the project, led by private firm Halo Kilmarnock Ltd, hope to secure a further £10m from the Scottish Government to take the regeneration project forwards.

Additionally, they are courting a number of public sector funded bodies to support the project including the University of the West of Scotland, and the Scottish Business Resilience Centre .

Marie Macklin is a Director of Halo Kilmarnock Ltd. Drew Macklin, Marie’s husband, controls more than 75 per cent of the voting rights and the shares of the company set-up to develop the site, according to documents filed at Companies House.

Diageo is also a member of the Scottish Whisky Association. It has successfully delayed Scottish Government plans to introduce minimum unit pricing of alcohol by mounting a legal challenge to laws originally passed at Holyrood in 2012.

The Scottish Government has confirmed that other civil servants attended the Barack Obama event, but has so far declined to say which ones, and it has not named the organisations that funded their attendance.

A Scottish Government spokesperson said: “Both the First Minister and all other Ministers that attended the Hunter Foundation Charity event were invited as guests, and therefore no costs were associated with their attendance.

“This was a charity event with all proceeds invested in supporting young people in Scotland.” 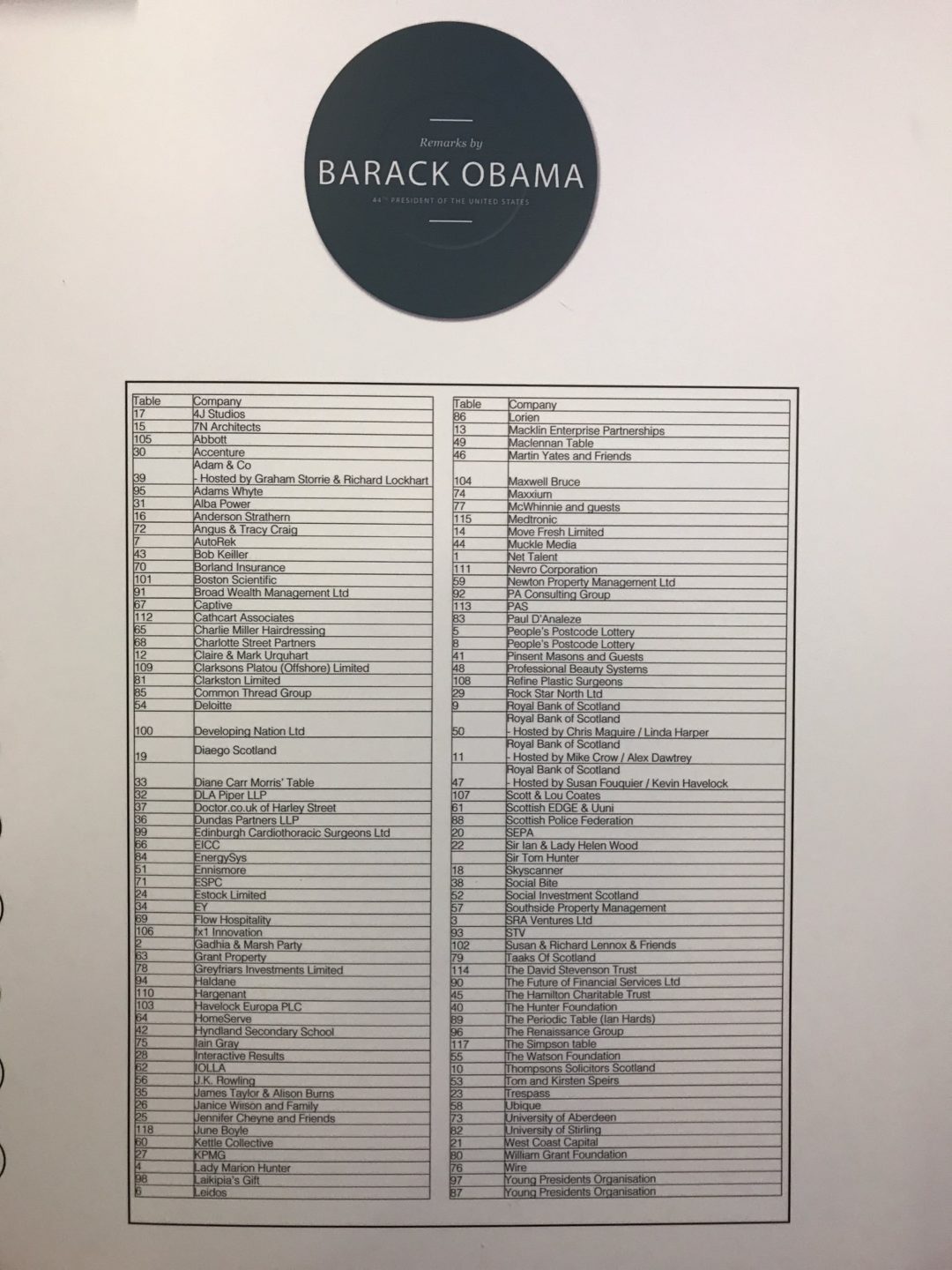 Other firms to buy tables at the event include a lobby group with close ties to the SNP, Charlotte Street Partners, and PA Consulting, a company that has undertaken work setting up the Scottish Government’s social security system.

There’s no way of knowing who’s had a quiet word with whom. Tamasin Cave, Spinwatch

Scottish architects, The Kettle Collective, funded a table at the event. The firm is working on designs for a new bridge across the Clyde that will be funded by the Glasgow City Deal cash.

Among the guests at the Kettle Collective table was Frank Ross, the Lord Provost of the City of Edinburgh Council.

But despite austerity squeezed public sector budgets, a number of tax-payer funded bodies also paid for their staff and unnamed guests to attend the event directly.

The Scottish Environmental Protection Agency (Sepa) forked out £12,000 for a table at the event. Taxpayers funded six unnamed Sepa staff and four guests to attend, equivalent to £1,200 per person.

Sepa defended its spending by pointing out that Obama had the ability to positively influence international moves to cut climate pollution. “The event was a great development opportunity for some of our staff and key stakeholders to learn from, and be inspired by, Barack Obama’s leadership,” said the agency’s Chief Executive, Terry A’Hearn.

“Each of the Sepa staff members is presenting the key lessons they took from the President’s speech to colleagues, which will help maximum the benefits from the event.”

Two universities also paid for their staff to attend.

A spokesperson for the University said it invited alumni and guests to the event and added: “Universities operate in an increasingly competitive environment, therefore growing philanthropic income and strengthening relationships is incumbent on every higher education institution.”

The University of Aberdeen said they spent £3,000 sending The Very Reverend Iain Torrance, Pro Chancellor, and Elizabeth Bowie, Director of Development & Alumni Relations to the event, and eight unnamed guests of the University’s Development Trust.

The University of Aberdeen argued the dinner provided a “crucial opportunity for networking” and it was “standard practice” for universities to pay to attend these types of events. “As the funding landscape for universities changes, the role of philanthropy in UK higher education becomes ever more important,” said a university spokesperson.

“Events such as this enable representatives of the university to establish and build relationships with potential supporters whose philanthropic aims align with the institution’s strategy. Without support from our generous community of donors, a significant proportion of the university’s world-class research in areas from medicine to the humanities would not be possible.”

The Chief Executive of the City of Edinburgh Council, Andrew Kerr and his partner, as well as the Lady Provost and Laurence Rockey, the council’s Head of Strategy and Insights, attended the event as guests of the venue, the Edinburgh International Conference Centre. The council valued each ticket at £500.

Although profitable in the last year, the company that operates the Edinburgh International Conference Centre is wholly owned by the City of Edinburgh Council and, according to its most recent accounts, the company owes the council £60.5m.

The council does not charge the EICC interest on these loans and in the accounts the firm acknowledges that it relies on them as an “ongoing source of funding.”

A spokesperson for the City of Edinburgh Council said: “Staff attended the event as guests of the EICC with no cost to the council taxpayer.”

A spokesperson for the EICC said: “As host venue for the Obama event, the EICC had one table on the night with three of the guests being from City of Edinburgh Council, who are the owners of the EICC although we operate at arm’s length as a commercial venture.

“We were operationally profitable last year (2016) and generated an operating profit of over £600k.  As such we do not require and do not receive any operational funding from the council.  Therefore no public money was expended by the EICC in connection with the event.”

He added: “It’s disappointing but unsurprising to see Scottish Ministers listed as guests of developers and multinationals. As for the hospitality provided to council bosses by council-owned EICC, I’m sure many Edinburgh residents will question whether this was best use of a public resource.”

Tamasin Cave, of anti-lobbying campaign group Spinwatch was also critical. “£12,000 is a lot of public money for the Scottish Environment Protection Agency to burn in one night,” she said.

“At the very least, we should be able to see who else was on their table and benefiting from taxpayers’ largesse. Just as problematic, though, are the ministers, like Fiona Hyslop who spent the evening in the company of Diageo.”

She noted that the lobbying agencies, management consultants and law firms were all present too. “Their clients can rub shoulders with ministers, but there’s no way of knowing who’s had a quiet word with whom.”