Tens of thousands of seabirds on the remote Scottish islands of St Kilda have starved to death because of food shortages caused by global warming, according to environmentalists.

The latest monitoring has revealed catastrophic crashes in the populations of four seabird species on the north Atlantic islands over the last 16 years. Rising water temperatures caused by climate pollution are blamed for making the marine life on which the birds feed more difficult to access.

The numbers of guillemots, fulmars and razorbills have dropped by between 50 and 70 per cent between 1999 and 2015. Kittiwakes, small migratory gulls, have declined by nearly 90 per cent, and are now said to be “heading for extinction”.

The monitoring is coordinated by the National Trust for Scotland, which owns the St Kilda archipelago 41 miles west of North Uist. The wind-swept islands are a globally important site for seabirds, hosting 17 different species and up to a million individuals in the breeding season.

St Kilda is the largest seabird colony in the northeast Atlantic, including puffins, gannets, Manx shearwaters, Leach’s storm-petrels and great skuas. For the last 30 years it has been designated by the United Nations as a World Heritage site for its natural wonders.

But the seabirds are suffering. Regular counts from the land and sea by specialists show that by 2015 there were only 276 nests left used by kittiwakes. That’s a fall of 89 per cent since 1999, with interim counts suggesting a continuous decline.

Latest counts in the last few months on one of the St Kilda islands, Boreray, and two adjoining sea stacs, have confirmed the dramatic downward trends. Populations of kittiwakes, fulmars, razorbills and guillemots have all plummeted by 60 per cent or more since 2000.

According to Susan Bain, who manages St Kilda for the National Trust for Scotland, a dearth of food triggered by climate change is probably the main cause of the collapse. Sandeels, on which some seabirds depend for food, are thought to be moving deeper or further north as the ocean warms, making it harder for birds to find them.

But Bain pointed out that there could be a range of other factors involved. These included over-fishing, discarded fishing gear, changes in fishing practice, plastic pollution and predation by other seabirds such as great skuas.

Seabirds were central to the natural and cultural heritage of the islands and it would be a tragedy if they disappeared, she argued. “I can’t imagine St Kilda without seabirds,” she said.

“It would be such an impoverished place. Nothing would make sense any more. They are the sense of the place, the sound, the smell, the sight.”

“Something would be fundamentally wrong if they were not to be here. We can see this happening, but we have the opportunity to stop it if we do something before it’s too late.”

I can’t imagine St Kilda without seabirds. It would be such an impoverished place. Nothing would make sense any more. Susan Bain, National Trust for Scotland

The Royal Society for the Protection of Birds in Scotland pointed out that seabirds were a key indicator of the health of the seas. “St Kilda is one of the world’s most important wildlife sites,” said the society’s seabird officer, Laura Bambini.

“It is devastating to witness the declines of breeding seabirds there, and around Scotland. The birds are struggling to breed, chicks are starving and, if this continues, the sea cliffs of Scotland could soon fall silent.”

The changing global climate was “driving massive shifts in marine ecology”, she argued. The climate agreement by world leaders in Paris last December and the Scottish Government’s polices to cut carbon pollution were “positive long-term steps”.

But more need to be done, Bambini said. “Seabird island restoration projects will help more immediately to build resilience, and Scotland’s fledgling network of marine protected areas, if developed further and managed well, will be a critical basis for future progress. The urgency lies in making these initiatives work.”

The government’s wildlife agency, Scottish Natural Heritage, agreed that seabird populations were declining and that climate change was probably a cause. “The reasons are likely to be complex and sometimes related to local conditions at a particular site,” said the agency’s bird expert, Dr Andrew Douse.

“However, it is true that a major factor in many seabird declines, especially those that primarily feed on sandeels, is due to a decrease in sandeel availability to breeding birds at critical times during the breeding season.”

The lack of sandeels was “probably” related to warming oceans, which were known to adversely affect sandeel spawning, Douse added. “Heavy fishing pressure on sandeel stocks may also act in conjunction with warming seas to depress sandeel availability.”

The warming waters were “almost certainly linked to climate change,” he said. “Long-term monitoring of sites like St Kilda and other sites is the key to aiding our understanding of what’s happening.”

The Scottish Government accepted that it had to make more effort to combat climate change. Scotland had made “outstanding” progress by meeting its target to cut carbon pollution six years ahead of schedule, said a government spokesman.

“However the decline in seabird populations is a reminder that more needs to be done, which is why Scotland will continue to champion the need to decarbonise the economy and tackle climate change, which has been identified as a key possible driver for that decline.” 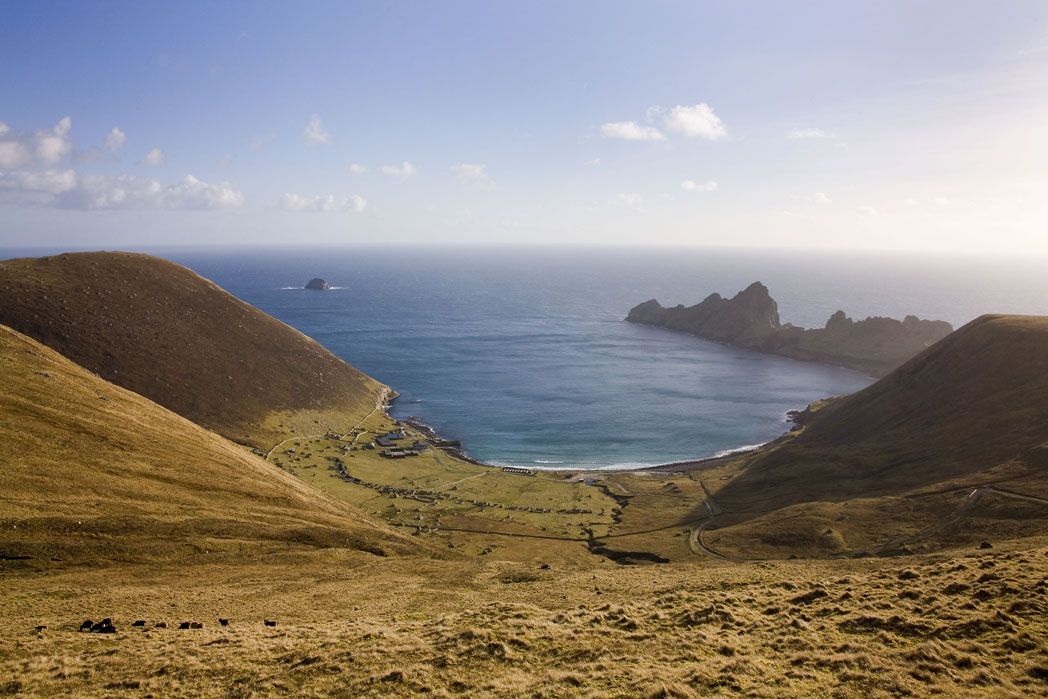 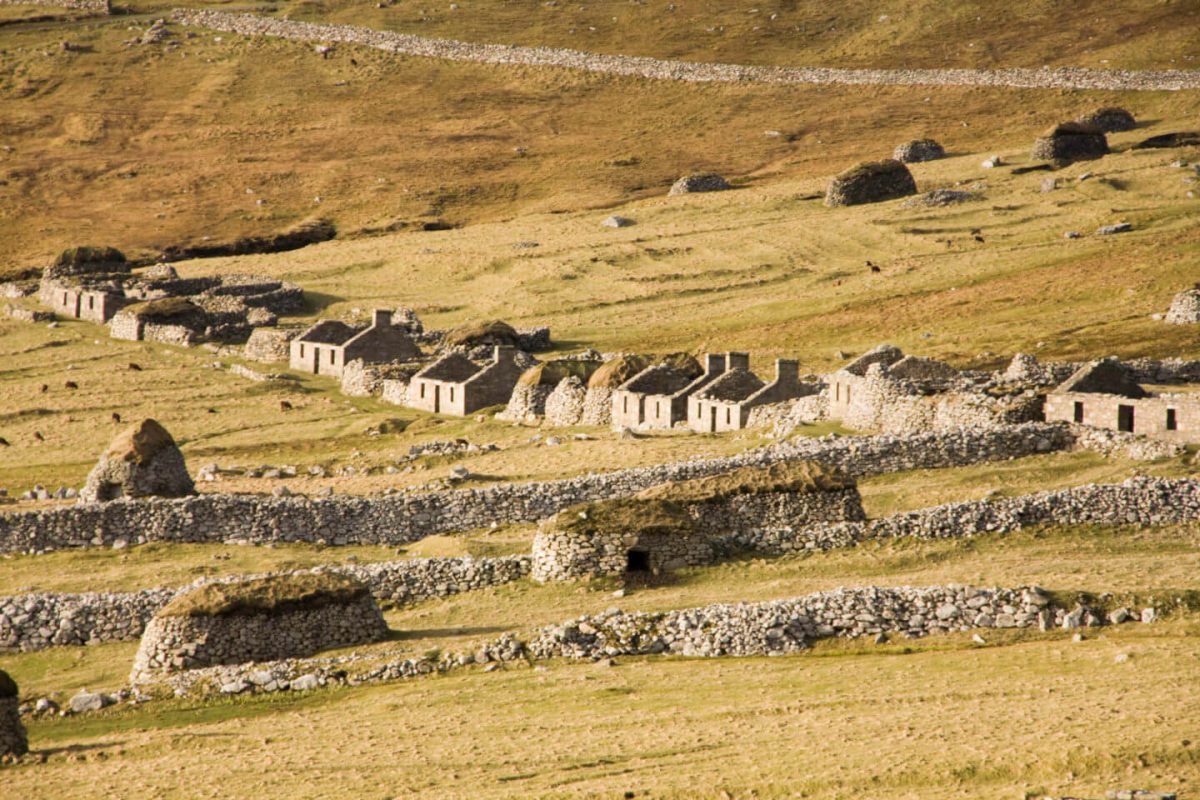 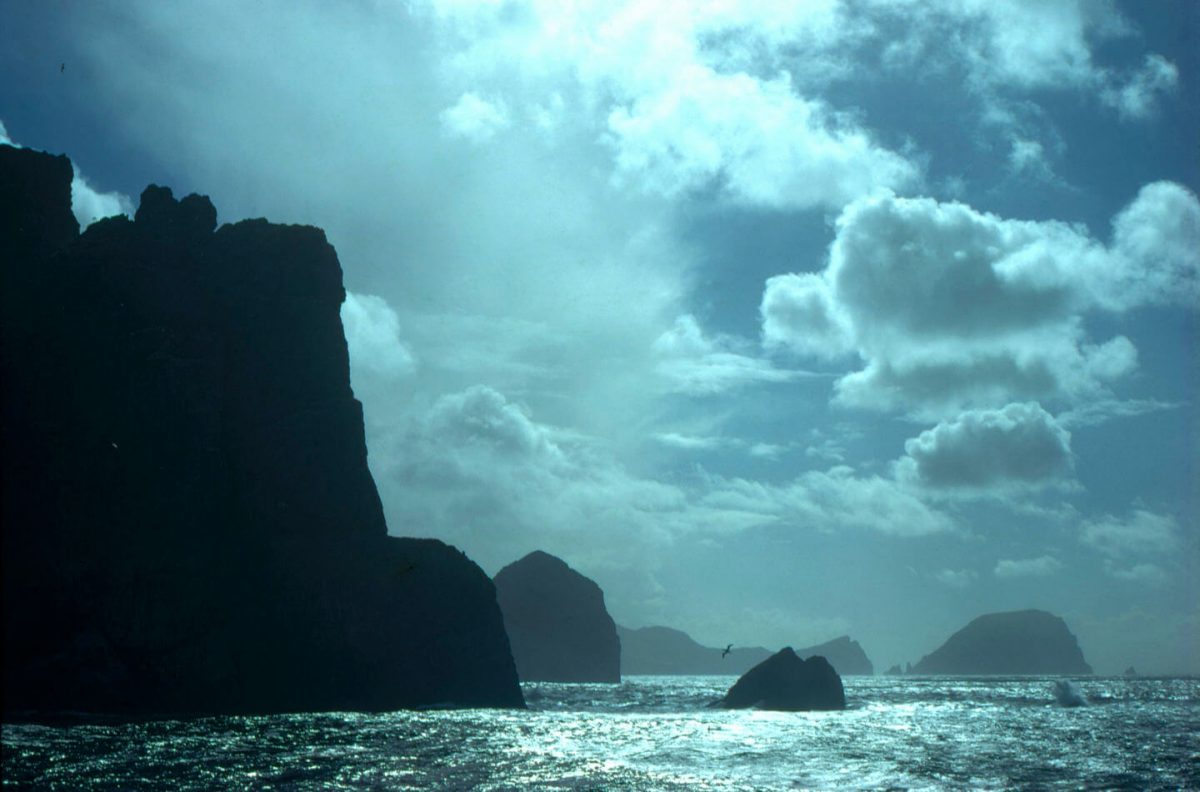 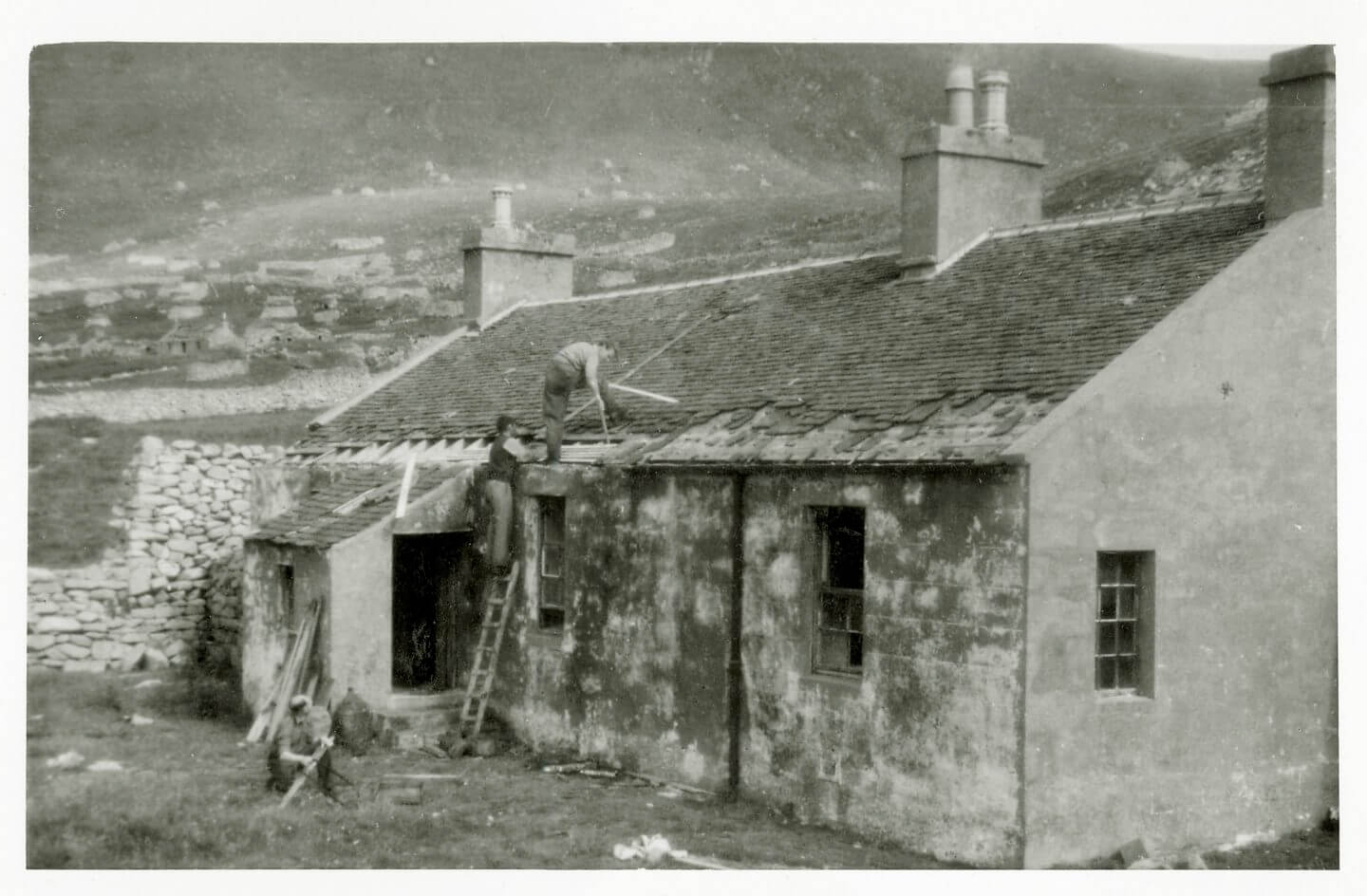 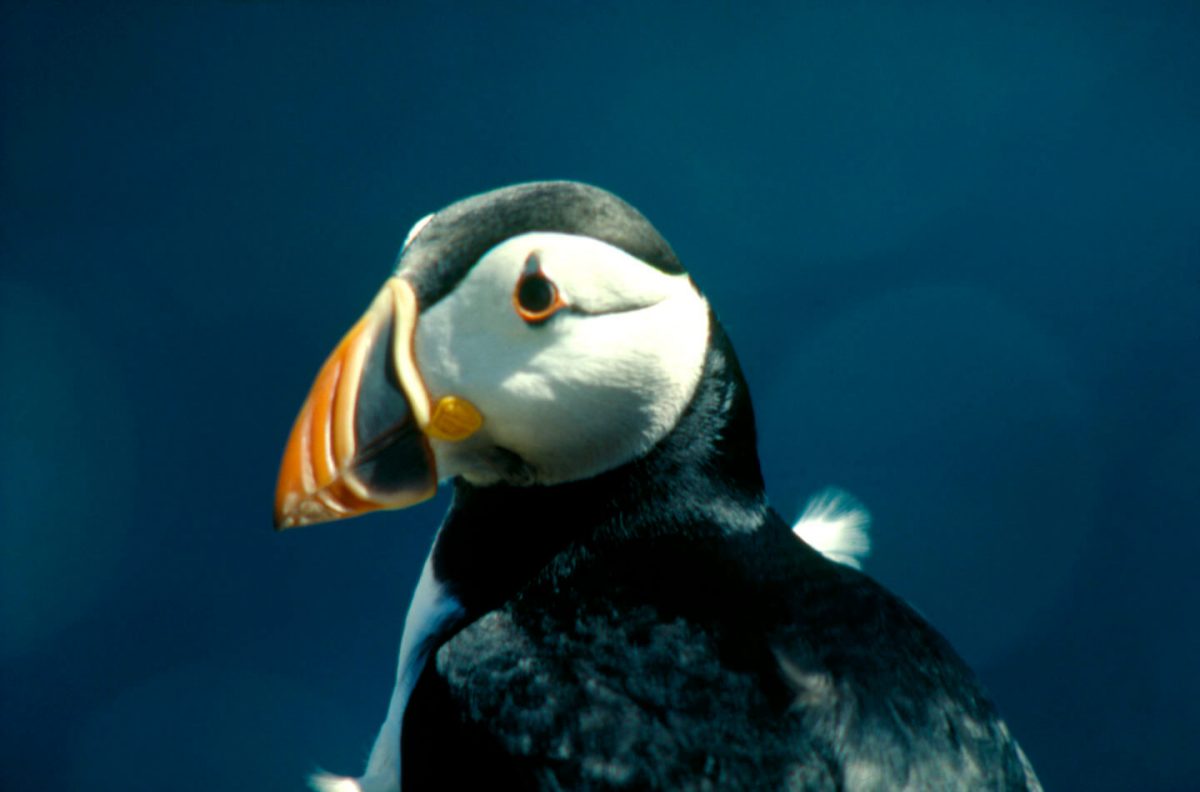 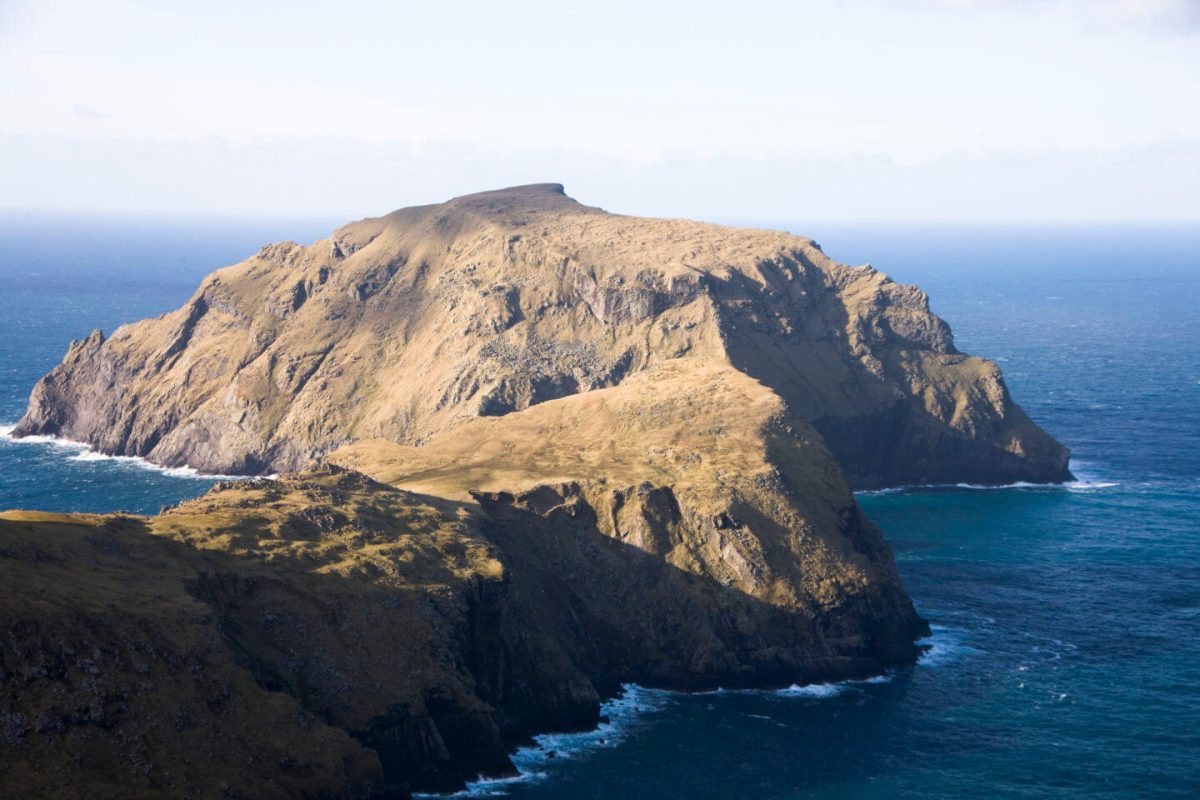 When people used to live on St Kilda, they snacked on puffins. They also ate over 100 fulmars a year each, as well as gannets.

Surviving on the remote Scottish group of islands far out in the north Atlantic meant you had to eat seabirds. You also required an unusual degree of weather–proofing, a strong sense of community and some considerable stamina.

St Kilda was inhabited for thousands of years until its remaining population of 36 requested evacuation in 1930. It is now officially one of the earth’s most precious places, and is celebrating its 30th anniversary as a United Nations World Heritage site.

It is unique in the UK for being listed for both its natural and cultural significance. Other World Heritage sites include Stonehenge in England, Machu Picchu in Peru, the Serengeti in Tanzania and the Grand Canyon in the United States.

St Kilda inspires superlatives. It has the highest sea cliffs in Britain at Conachair, and the two highest sea stacs, Stac Lee and Stac an Armin, rising like gnarled giants out of the water.

It has one of the largest colonies of gannets in the world, as well as two sub-species unique to the islands, a wren and a field mouse. Its feral Soay sheep, having bred on the islands for thousands of years, are studied by scientists keen to learn about genetics and ecology.

Then there are the remains of human occupation: the historic grassy street of Village Bay, a church, the factor’s house and nearly 1,400 conical stone structures used for drying and storing seabirds known as cleits.

St Kilda, an archipelago including the main island of Hirta along with Dùn, Soay and Boreray, is now looked after by the National Trust for Scotland. Caring for the islands cost the charity about £270,000 a year.

It is launching a new fundraising appeal called ‘Love our Islands’ so that it can continue to protect St Kilda and other islands and coastal areas it is responsible for. The Trust also owns Fair Isle, between Orkney and Shetland.

The Trust’s chairman, Sir Moir Lockhead, stressed the importance of St Kilda. “Its remote location, outstanding natural beauty and the dramatic story of the people who once lived there have captivated people across the centuries and it still holds an allure for many people today,” he said.

“More importantly, anyone who cares about our seabirds and the wider health of our oceans will appreciate the work we carry out here year on year at St Kilda.” He was due to travel to the islands last week to unveil a new commemorative plaque, but the trip was cancelled because of bad weather.

There is also a military facility on St Kilda, which is out of bounds for visitors. The Ministry of Defence was leased land on Hirta in 1957 for a radar tracking station for its missile range on Benbecula in the Outer Hebrides.

Photos all thanks to National Trust for Scotland.

A version of this story was published in the Sunday Herald on 19 June 2016.