Scottish taxpayers give £110,000 handout to Trump

Scottish taxpayers have given Donald Trump a £110,000 handout to help his £11 million golf business in Ayrshire, The Ferret can reveal.

An emergency bailout for struggling tourism businesses introduced by the Scottish Government has benefited Trump Turnberry, the profitable, prestige hotel and golf resort on the southwest coast.

The public subsidy for such a “toxic” private brand was an “embarrassment” that could damage Scotland’s reputation, opposition politicians have warned. They are demanding urgent reforms to business rates to prevent it from happening again.

In February 2017, the Scottish Finance Secretary, Derek Mackay, announced a “transitional” business rates relief scheme to reduce the property taxes paid by hotels, restaurants and others in the hospitality industry. This followed complaints from businesses in the northeast suffering from an economic downturn caused by a drop in oil prices.

Now a joint investigation by The Ferret and The Guardian has discovered that the scheme subsidised Trump. According to South Ayrshire Council, it directly resulted in rates relief for Trump Turnberry of £109,530 for 2017-18.

The relief was “mandatory” under Scottish Government rules, the council said in response to a freedom of information request. It is the only relief that the resort has received, and amounts to a 13.5 per cent reduction in Trump Turnberry’s estimated annual rates bill of £811,800. 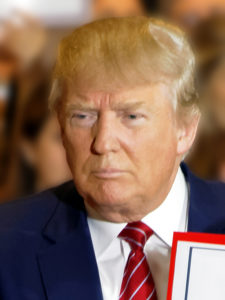 Earlier this year, Trump said that the business was doing “unbelievably” because of the fall in the value of the pound after the Brexit vote. Trump Turnberry was expecting record revenues of up to £18m this year, and was forecasting a profit after years of operating losses.

Donald Trump bought and renamed the resort, which has hosted the British Open golf championship four times, for £34m in 2014. He is still the owner, but the business is now run by his son, Eric Trump.

It’s galling to learn that the public purse is giving him a helping hand Patrick Harvie, Green MSP

“It’s bad enough that he has a business presence in Scotland. It’s galling to learn that the public purse is giving him a helping hand.”

Harvie argued that ministers could not stick with a system that inadvertently gave support to Trump’s business empire while “tarnishing Scotland’s reputation for fairness and hospitality.”

He called for business rates relief to be reformed. The Scottish Government’s review of the system, conducted by former RBS Scotland chairman Ken Barclay and published today, recommends that “a national list of all relief awarded for all properties should be published” to aid transparency.

Labour’s Lewis Macdonald MSP contrasted the handout being given to Trump Turnberry with the hardships being faced by businesses in the northeast, some of which were facing closure. “This case highlights the unfairness of the current system and the urgent need for reform,” he said.

“A profitable business at the other end of the country owned by a very wealthy man gets the kind of rebate which would make all the difference to my constituents due to the very limited and untargeted nature of the Scottish Government’s efforts.”

Although the rates relief scheme was prompted by business demands in and around Aberdeen, Trump’s other Scottish golf resort at Menie, on the Aberdeenshire coast, did not qualify for any subsidy. According to Aberdeenshire Council, this was because it is defined as a golf course rather than a hotel and did not meet the required threshold for rates increases.

Absolutely no-one would think that the best use of nearly £110,000 of public money is to use it to enhance Mr Trump's bank balance Martin Ford, Aberdeenshire councillor

The handout for Trump Turnberry was criticised by veteran Trump critic, Aberdeenshire councillor Martin Ford. “All policy changes have unintended consequences, and this is a bad one for the Scottish Government,” he said.

“Absolutely no-one would think that the best use of nearly £110,000 of public money is to use it to enhance Mr Trump’s bank balance. He clearly doesn’t need it.”

Ford pointed out that Trump’s reputation was even worse now than it was when successive Scottish governments helped him come to Scotland a decade ago. “He is seen to stand for values and attitudes most people find abhorrent,” he said.

“Any association with or support for Mr Trump is inevitably an embarrassment.”

The Scottish Government did not comment on the criticisms. It promised to respond “swiftly” to the recommendations made by the Barclay review of business rates.

A spokesman added: “Our hospitality rates relief is available to 8,500 businesses and 100,000 small business properties – half of all properties – pay no rates at all. It is for businesses to apply for rates relief and for councils to ensure those which do are eligible.”

Trump Turnberry has not responded to requests to comment.

This story was part of a joint investigation with The Guardian.

Cover image thanks to Billy McCrorie, licensed for reuse under this Creative Commons Licence. Photo of Donald trump thanks to Michael Vadon, CC BY-SA 4.0, via Wikimedia Commons.