The Coal Authority has been criticised after a sub-standard maintenance job led to a Lanarkshire river running red with pollution.

Experts say the “extremely regrettable” discharge of ochre sediment from the Pool Farm minewater treatment facility into the Dippool Water could have had a “huge impact” on river wildlife.

The Dippool Water is part of the Clyde river system.

The dark red sludge can raise iron levels and acidify water courses. The sediment itself also damages habitats that are vital for the small animals that underpin the food chain and it can clog the gills of freshwater invertebrates.

The incident, which took place on March 16, forced the Coal Authority to order their contractors, Severn Trent Services, to halt all work at the Pool Farm minewater treatment scheme near Carnwath in Lanarkshire.

This means that any further pollution from the Coal Authority site could lead to the regulator taking legal action against it.

There are 11 other similar sites managed by the Coal Authority in Scotland where minewater has the potential to cause pollution, and many more in England and Wales. 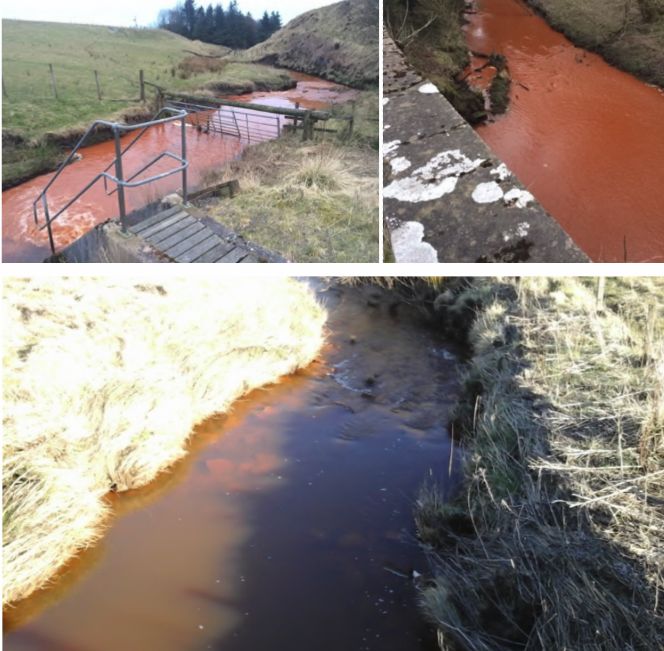 An investigation by the Coal Authority at the Pool Farm site found there had been a series of errors that led to discharge polluting a nearby river called Dippool Water.

No work to ‘desludge’ the site had ever been undertaken which meant that sediment had been allowed to build up.

Then, when maintenance was finally undertaken, incident reports found that the Coal Authority had failed to supervise its subcontractors effectively.

The contractor was found to be working without any equipment to prevent or mitigate the polluting sludge entering the river.

There was also “reasonable suspicion” that a worker at the site had not followed a work plan that had been agreed for the job.

Even when the pollution was spotted by another Coal Authority worker visiting the site and the alarm was raised, the contractor resumed work the following day, leading to further discharges into the river.

The Ferret contacted the Sustainable Water Company to ask for a comment but did not receive a response.

According to the incident report, the Sustainable Water Company was “suspended from all Severn Trent work” and a “full investigation” was undertaken by Severn Trent Services “to determine the future utilisation and status of this contractor.”

A spokesperson for Buglife explained the negative impact that ochre has on Scotland’s rivers.

Buglife said: “Polluted water from disused mines is a terrible consequence of central Scotland’s industrial past. These discharges are unsightly and have a huge impact on freshwater invertebrates .

“Treatment systems such as this in Lanarkshire are an effective solution to this problem however regular, careful maintenance is required to prevent them becoming ticking water pollution timebombs.”

Dr Richard Dixon of Friends of the Earth Scotland said: “This is a very concerning case. The Coal Authority was created to protect communities from minewater pollution.

“The Pool Farm example demonstrates a series of failures, with the Coal Authority clearly not paying attention to critical issues.

“The public need to be assured that the Coal Authority are doing a much better job at the other sites they are supposed to be looking after.”

Following the Pool farm incident the Coal Authority has pledged to cooperate with SEPA on a review of its procedures at Dippool and other minewater treatment sites across Scotland that work in a similar way.

A spokesperson from SEPA, said: “As part of the Mine Water Treatment Scheme at Pool Farm, natural reed beds have been used to filter ochre and other suspended solids before water is allowed to flow into the local Dippool Water.

“During routine work by the Coal Authority to maintain these reed beds, ochre material which had settled in the reed bed was disturbed and overflowed into the Dippool Water.

“Monitoring of the river after the incident found that the discharge had resulted in a decline in water quality downstream of the treatment scheme.”

“As a result, SEPA issued a final warning letter to the Coal Authority on 11 May 2016 which noted that any further or continued contravention of the regulations would likely result in enforcement action being taken.”

“The Coal Authority has cooperated with SEPA and advised that no further work will be carried out on the reed beds until a method statement is agreed with SEPA which ensures adequate protection of the surrounding water environment.”

“SEPA has not received any further reports of pollution since this incident.”

A spokesperson for the Coal Authority claimed the “extremely regrettable” discharge, which discoloured the receiving watercourse in February this year, was quickly contained.

He added: “Together with our contractual partners, we carried out an immediate investigation into the incident and are implementing the recommendations within the report.

“In addition, our procedural and management controls have been reviewed and amended. Safeguarding actions are also being implemented to prevent similar events in the future.”

“All recommendations for improvement identified as part of the root cause investigation into the incident have been completed.”

Source documents for this story are available in our searchable document archive. The documents are also available from this Freedom of Information request response by Samantha Kerr on whatdotheyknow.com