Property developers have made repeated attempts to limit the amount they must spend on public space improvements around a controversial £850 million shopping redevelopment in the heart of Edinburgh, according to documents seen by The Ferret.

Campaigners have questioned whether a funding deal agreed with investors in the redevelopment of the St James Quarter in 2014 is restricting the design options for Picardy Place, a major junction at the top of Leith Walk.

They have accused City of Edinburgh Council of an “extreme” lack of transparency over its dealings with property developers, and say there are “questions to answer” over who controls the project.

Documents show that the developer, Edinburgh St James, has been putting pressure on council officials behind the scenes in an attempt to cut the money it must pay to improve the area.

A document dated 20 June 2016 shows the developer feared that their investment would not generate the profit they had expected. A “value shortfall” had been caused by the failure of the council to complete the tram line to Newhaven, they said.

In order to provide “certainty for investors” in the scheme  a senior council official, Colin Smith, who has been paid nearly £1m for his work as a consultant on the Edinburgh Tram project in the past, tabled a proposal on behalf of the developers.

He argued that the council should provide a £1.4m guarantee to the St James Quarter developers to cover the potential risk that costs associated with building the tram stop at Picardy Place could be greater than they originally estimated.

Around the same time, Smith was also circulating a proposal that would see the the developers exempted from a planning condition that requires them to pay £1.4m towards the construction costs of a tram stop at Picardy Place.

In the proposal, marked “commercially confidential”, it is alleged that council officials gave representatives of St James Edinburgh a verbal assurance that the obligation to pay £1.4m towards the tram stop would be dropped, if they agreed to back a separate Growth Accelerator Model (GAM) funding agreement.

First outlined in 2014, the GAM agreement allows for up to £61.4 million to be invested in public spaces surrounding the development site.

The Ferret has confirmed that both these cost-saving proposals were subsequently rejected by the other GAM partners: the City of Edinburgh Council, the Scottish Government and the government’s Scottish Futures Trust.

But despite this, the Green councillor for the area, Claire Miller, describes the Picardy Place road design written into the GAM deal as “disappointing”. She says it “locks the city centre into very high volumes of private vehicle use.”

“There are questions that need to be answered on whether the funding is driving the proposed design, so that the city council can make the right decision on what’s best for Edinburgh.”

“If the new St James Centre is to be fit for a 21st century city centre, we need to have an open and transparent debate about how it is shaped and how the funding arrangements influence that shape.”

Earlier this year Sustrans, an active travel charity, criticised the ‘gyratory’ Picardy Place design and said it did not meet with national standards on street design guidance from the Scottish Government.

The group claims the contracted GAM design is too focused on private car travel. Local campaign groups would also like to see the space used to promote more environmentally friendly transport options.

Other critics seeking to alter the plans say they will lead to a poor quality public space and that they fail to take proper account of the needs of local residents and business.

Sustrans, and Zone Architects, who worked with local website, The Broughton Spurtle, have produced two alternative proposals to illustrate other options for the site. 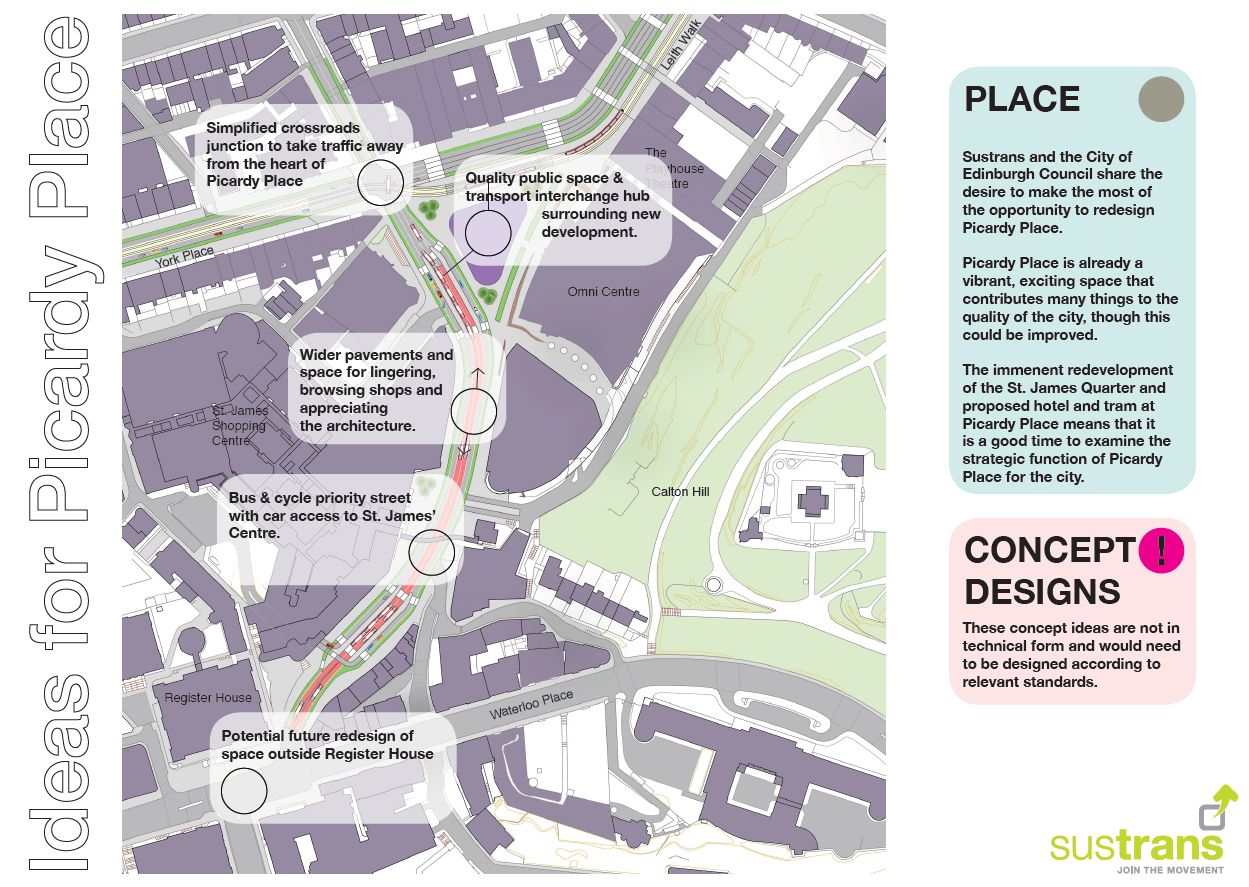 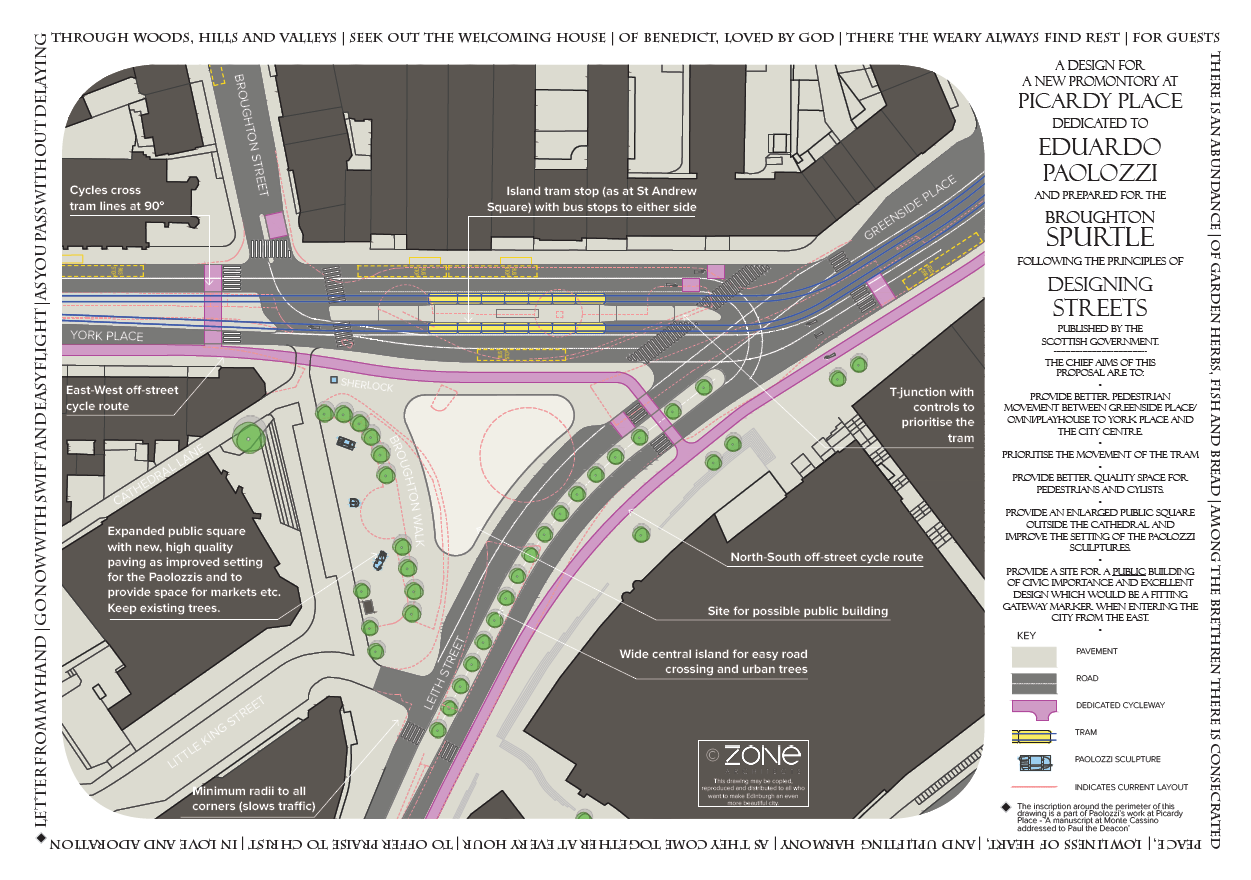 But the council has dismissed the alternate plans arguing they would cause excessive traffic congestion, although no detailed costings or traffic models for the counter-proposals have been published. Freedom of Information requests made by locals have been delayed.

Officials have laid on public consultation events, which critics say have left the latest design basically unchanged. Some have alleged that officials have misrepresented the Sustrans counter proposal in a bid to discredit it, though this was denied by Edinburgh council.

“The response to the latest phase of the consultation has been excellent, with hundreds of residents and representatives from various interest groups taking the time to attend our drop-in sessions and have their say,” said a council spokesperson.

Unpublished documents obtained by The Ferret show that the council has agreed £500,000 worth of design changes to the Picardy Place project – but only as part of a deal with other project partners that will see an equivalent savings made elsewhere.

The documents show the project partners agreed the changes prior to the public consultation.

This is evidence that shows “that further changes could be undertaken,” according to Peter Williamson, a local resident and member of the Picardy Association, a group hoping to influence the plans.

The association accuses the council, Edinburgh St James, the Scottish Futures Trust and the Scottish Government of acting with “extreme” secrecy over the budget for the project. This lack of tranparency, it says, has left locals in the dark about the extent to which they can really influence the design.

How the deal works

The GAM deal is set up so that the developer manages all the construction work associated with the project.

An undated “approval strategy” document for the works produced by the developer includes a draft letter for the council to sign, allowing a series of Jersey-based companies linked to the developer the powers to alter the street design.

The construction work is paid for by a loan taken out by the council. This debt is then paid back over 23 years using money generated from increased business rates, and a developer contribution.

But the deal also includes incentives that allow the developer to minimise the amount of cash they pay towards the programme, provided they keep costs down.

According to council officials, incentives built into the deal mean that if the costs are kept down to £52m, the developer could avoid paying out more than £8m over 23 years in debt repayments.

This £52m figure was described as the “targetted” cost in a report by council officials in March 2016, and it remains the most recent overall cost formally reported to councillors for the project.

Council officials, when asked about the 2016 numbers dismissed them as “hypothetical” estimates. They insisted the final GAM project costs are now likely to come in at £61m.

They attributed the £9m overall price rise over the last 18 months to a “rise in construction costs as well as general cost inflation in the period since the last estimate.”

The developer must pay any costs over the agreed £61m price cap if there are no changes to the design. But if there are any changes the costs would need be born by the council alone.

One councillor, when pressed on social media on the matter, said officials told him that it could cost the council £20m to abandon the gyratory design. But again no official figure has been published and other councillors have denied seeing similar figures.

“The whole matter has been conducted outside the normal processes that one would expect from a council,” according to the Picardy Association’s Williamson.

Top council officials have promised association members that they would provide more information on the scope of the consultation and the origin of the gyratory proposals.

However, no information has been forthcoming. There remains, says Williamson, “an almost a complete blanket of secrecy, which by any standards is extreme.”

This view was echoed by David Spaven, of the active travel campaign group Living Streets Edinburgh.

He said there has been an “evident lack of transparency about the relationship between the council and the developer, with big decisions on traffic and parking being taken behind closed doors before local people and citizens as a whole can have their say.”

He added: “The council’s consultation over the summer has only been tinkering at the edges of the traffic scheme, with the major elements of the plan – such as the gyratory – just not up for discussion.”

A spokesperson for the developers, Edinburgh St James, declined to comment, saying it was a “matter for the council.”

Councillor Adam McVey, council leader, said: “Picardy Place is an important and well-used gateway into the city centre and, through this process, we’re aiming to identify the best, and most practical, balance between the needs of all road users, whether they travel by bike, bus, car, tram or on foot.

“Hand-in-hand with this, of course, is the ongoing development of Edinburgh St James, a major transformation of the area and one that, on completion, will create 3,000 full time permanent jobs and deliver a tremendous boost to the city’s economy.

“It is worth remembering the crucial part the council and the Scottish Government played in unlocking the development via the innovative GAM agreement, which is enabling a combination of public and private sector investment in local infrastructure and public space.

“One year into the project, the developers continue to make good progress on site and I am pleased to see the planned diversions have maintained the flow of traffic since the Leith Street closure began.”

The £850m redevelopment project is 75 per cent owned by a Dutch Pension Fund, and 25 per owned by THI Real Estate.