Scotland lagging behind the rest of the UK on recycling

The waste industry and environmental groups are worried that Scotland could fail to meet its target to recycle half of all household waste by 2020. They are calling for more action to boost recycling by national and local governments.

The latest waste statistics from the UK Department for Environment, Food and Rural Affairs show that in 2016 Scotland recycled 42.8 per cent of household waste. This compared to 43 per cent in Northern Ireland, 44.9 per cent in England and 57.3 per cent in Wales.

According to figures from the Scottish Environment Protection Agency (Sepa), the worst recycler in mainland Scotland was Glasgow, which only managed to recycle a quarter of its waste in 2016. Dundee, Aberdeen, Dumfries and Galloway, Argyll and Bute and island authorities also had low recycling rates.

The 13 councils with the worst recycling rates in 2016

Scotland has been criticised for lagging behind the rest of the UK by The Furniture Recycling Group, which recycles mattresses. “Britain is sleepwalking into a waste crisis, with Scotland the worst offender when it comes to recycling,” it warned.

“What is evident in Wales is a clear cooperation between the government and the people at the coalface of the waste and recycling industry who are tackling these issues daily,” said the company’s managing director, Nick Oettinger.

“The same needs to happen in Scotland and England if we’re serious about achieving our targets of both 50 per cent recycling by 2020 and zero avoidable waste to landfill by 2050.”

The Furniture Recycling Group said it recycled 7,000 mattresses a week. But it pointed out that over seven million still go to landfill every year in the UK – enough to fill Wembley Stadium five times over.

The Environmental Services Association, which represents the waste industry trade, also warned that recycling targets were in danger of being missed. “There is no doubt that if we want to be world leaders in recycling, then we will have to do a lot more,” said the association’s executive director, Jacob Hayler.

“Wales has shown that it is possible to drive domestic recycling rates higher with clear government support and increased funding for councils to put in place the additional services required.”

We need a whole economy shift to a circular, sustainable model with an emphasis on reduction and reuse, before recycling. Mary Church, Friends of the Earth Scotland

Friends of the Earth Scotland urged Scotland “to get its act together” to meet recycling targets. “While some local authorities are leading the way with recycling, others are shamefully behind with only a quarter of household waste recycled in Glasgow,” said the environmental group’s head of campaigns, Mary Church.

“Recycling is only one part of the answer to our ever growing mountain of rubbish. We need a whole economy shift to a circular, sustainable model with an emphasis on reduction and reuse, before recycling.”

According to Glasgow City Council, the predominance of tenements meant it was “challenging” to improve recycling rates. “The Glasgow Recycling and Renewable Energy Centre is due to become fully operational later this year and this will help to boost household recycling rates by up to 13 per cent,” said a council spokesperson.

“As part of our replacement programme for old fashioned steel bins we are also extending the number recycling bins being made available across the city, which we hope will make it easier for householders to recycle.”

The Convention of Scottish Local Authorities (Cosla) argued that councils had a “good record” of contributing to improved recycling rates in recent years. “We have, as a joint initiative between local and Scottish Government, developed the household recycling charter to help ensure more uniform waste and recycling collection systems,” said a Cosla spokesperson.

The Scottish Government pointed out that Scottish and UK statistics used different definitions of waste and recycling. Scotland’s higher proportion of tenements made separate waste collections more difficult, it said.

“We are ahead of the UK when it comes to introducing a number of recycling practices,” insisted a Scottish Government spokesman. Scotland had committed to a bottle deposit scheme, banned the sale of plastic-stemmed cotton buds and was working towards banning single-use non-recyclable plastics from 2030.

Sepa insisted that recycling was “a real Scottish success story”. As much as 61 per cent of waste from all sources, including households, was now recycled, composted or re-used, it said.

“The 2016 results showed real progress by Scottish families, including an extra 38,000 tonnes of material put to better use across the year,” said a Sepa spokesperson.

“The most successful countries in the 21st century will be resource efficient, circular economies, where what once was waste is valued as a resource. With its globally ambitious circular economy strategy and ongoing investment in zero waste infrastructure, Scotland remains well placed to realise the environmental and economic opportunities for our nation and its people.”

The world ‘drowning’ in its waste

“We are really drowning in our own garbage if we don’t act now,” says celebrated Dutch photographer, Kadir van Lohuizen. “For me, that was a shocking thing to discover.”

He visited six big cities around the world – Amsterdam, New York, Tokyo, Jakarta, Lagos and Sao Paulo – to document in pictures how they dealt with their growing mountains of waste.

His photographs – stark, striking and full of rubbish – are due to be displayed at the Scottish Parliament in Edinburgh from 1-25 August as part of the World Press Photo Exhibition 2018. Holyrood is the only parliament to host the show – and it’s free. 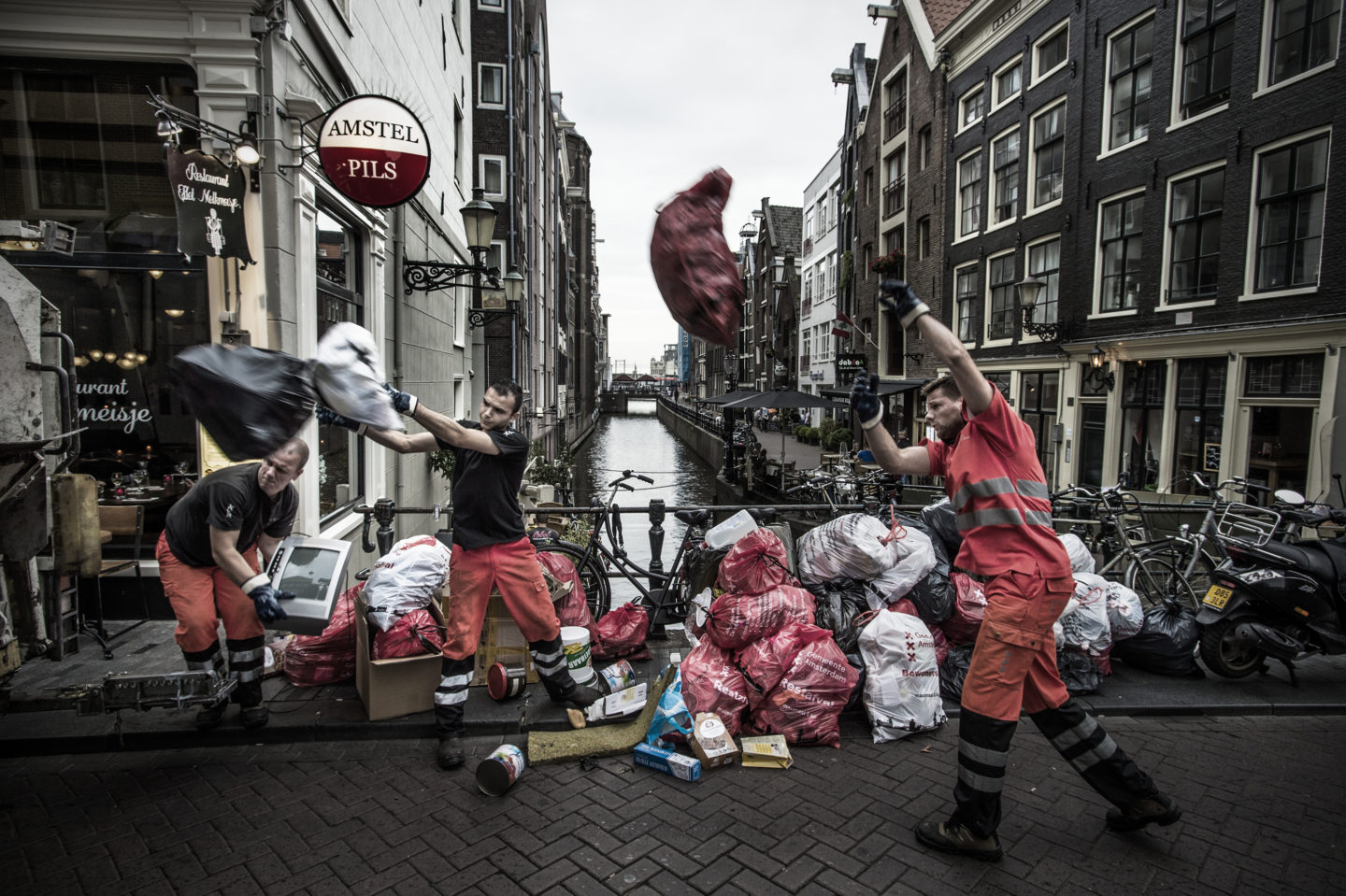 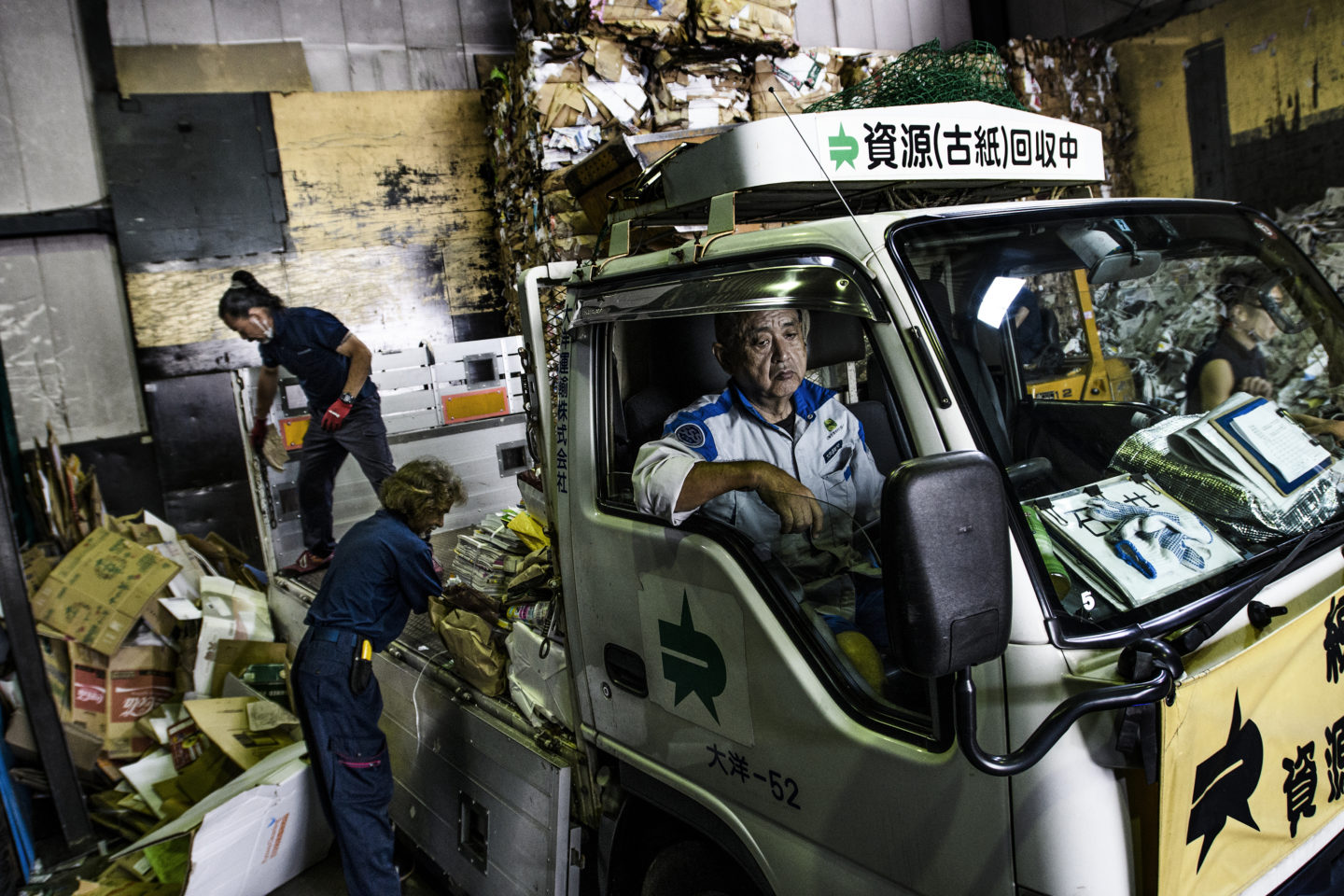 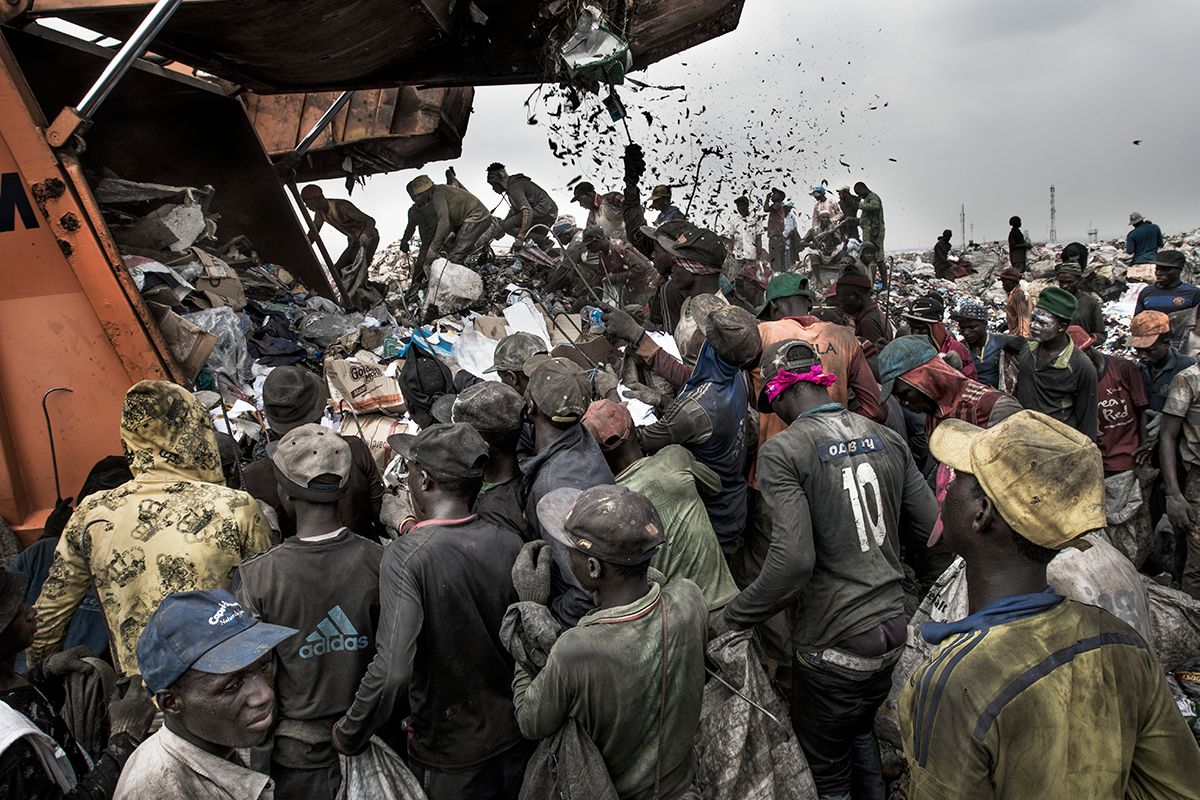 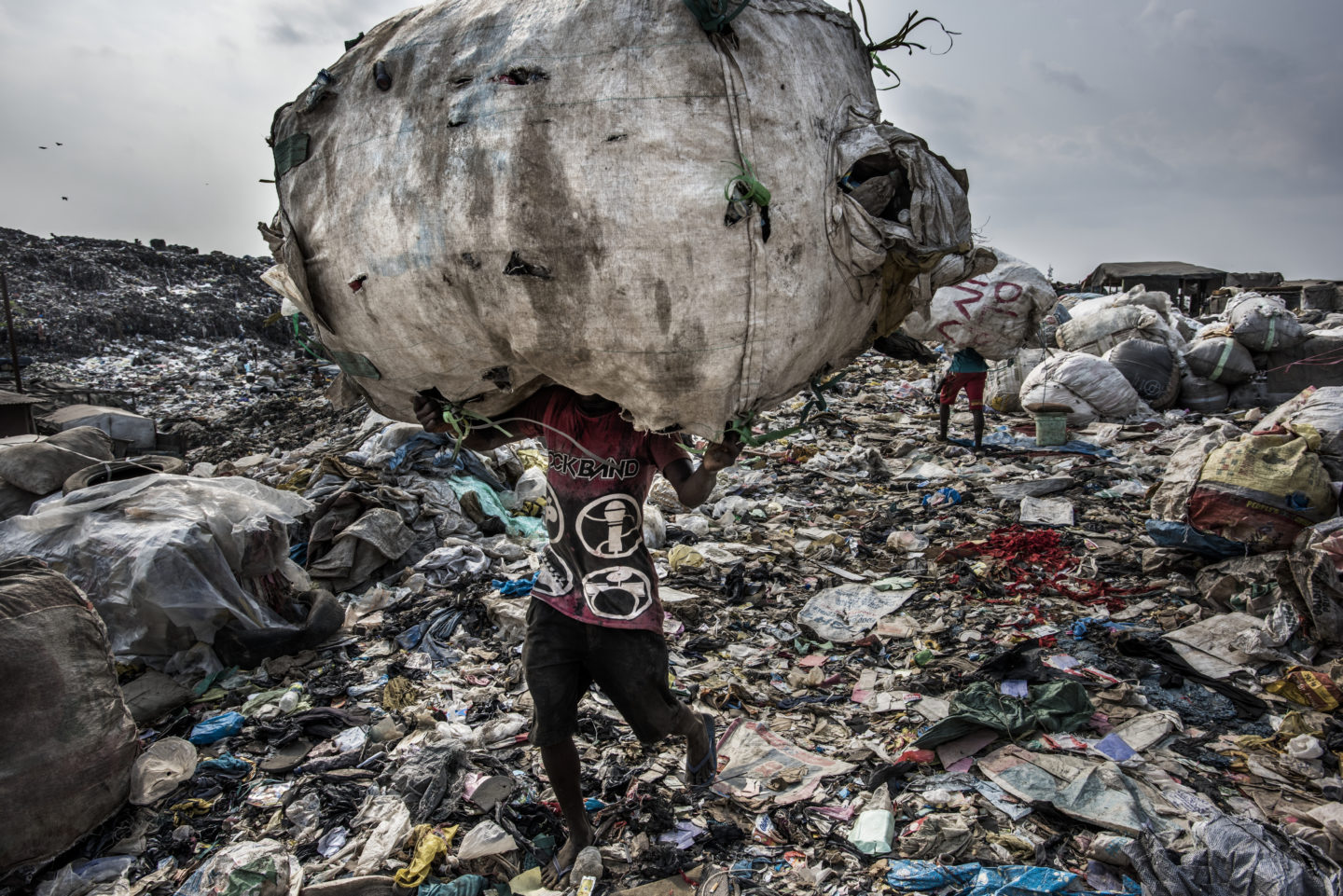 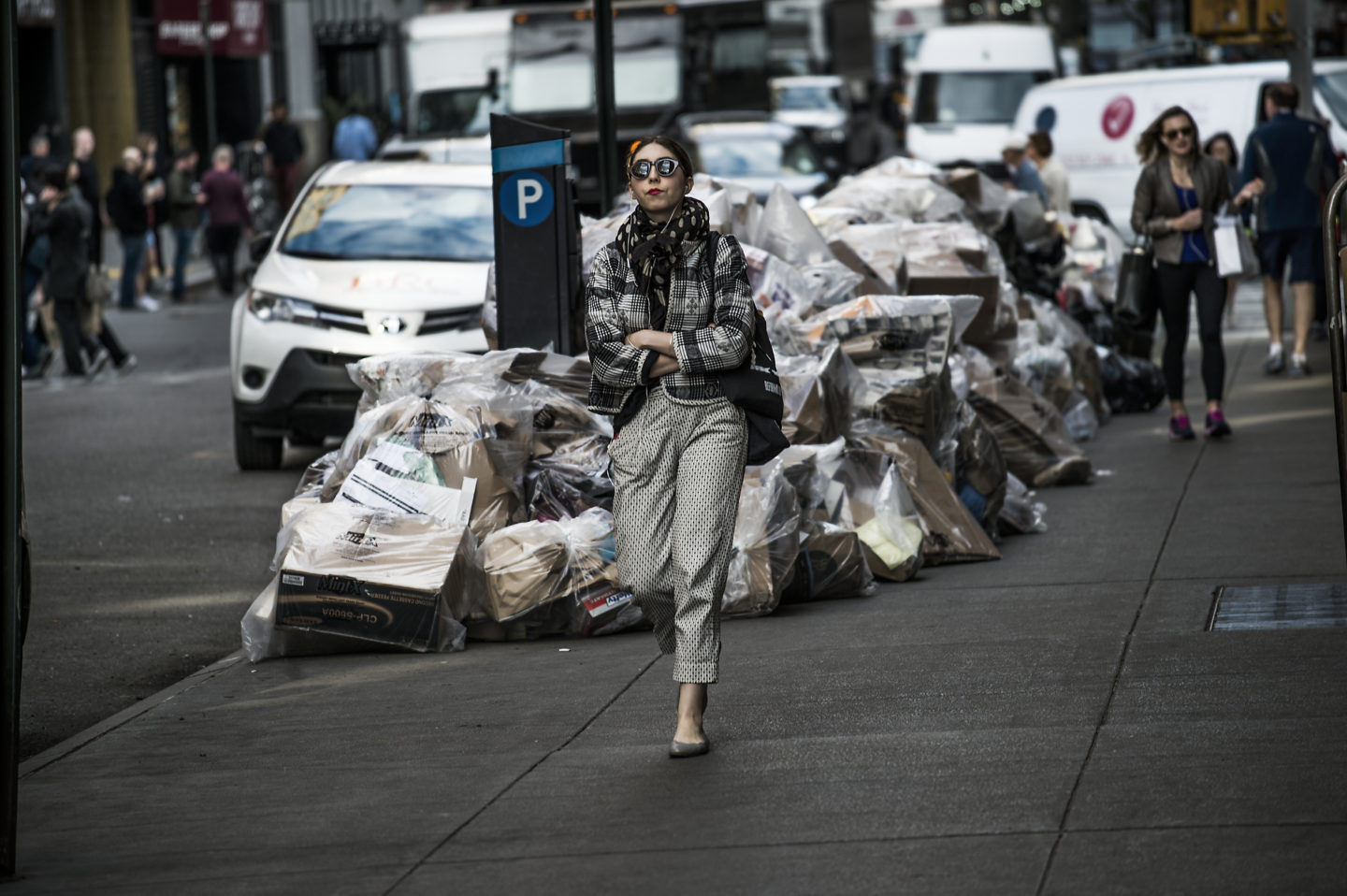 According to research by the World Bank, the world produces 3.5 million tonnes of solid waste a day, ten times more than a century ago. The World Economic Forum suggests that by 2050 there will be so much plastic floating in the world’s oceans that it will outweigh the fish.

For van Lohuizen, it started when he found plastic on beaches in The Netherlands that had come from other countries. “Plastic is the biggest problem at the moment and it feels like we can’t live without it,” he says.

“I started in Jakarta and saw artificial islands, basically full of plastic. The problem that Jakarta is facing is that most of the waste goes to a garbage dump – landfill – and they are full.”

He points out that China used to import large amounts of waste plastic, but it’s stopped. “So there’s a huge problem coming up for Europe and the US. Now there will be huge mountains of plastic piling up with nowhere to go,” he warns.

“The amount of waste New York produces is astounding. We look at Jakarta and Lagos and the waste is visible so we all think they produce more. But New York produces 15 times more than Lagos, which has about the same population.”

The problem is that we’ve become very good at hiding our waste, he says – and it may be left to our children to deal with. “We are all personally responsible for what we throw away and what we don’t,” he argues.

“We can get there but it all starts with education. Our generation is probably not able to change their minds and behaviour – so it seems – but kids are.”

Photos thanks to Kadir van Lohuizen NOOR Images. A version of this story was published in the Sunday Herald on 22 July 2018.