An organisation that opposes the arms trade is calling for £200m to be invested in the west of Scotland to make the region a global leader in green energy.

A new report by Campaign Against Arms Trade (CAAT) claims to be a blueprint for a greener Scotland, arguing that boosting green industries in the Clyde area such as wave and tidal power could create more jobs than if the same cash was invested in defence.

CAAT’s study – obtained by The Ferret and published today in tandem with The National – is called Arms Industry in The Clyde and Renewable Energy Options.

It says that £200m of joint funding by the Scottish and UK governments would equate to roughly half the cost of just one of the Type 26 Frigates being built on the Clyde.

CAAT argues that 5300 jobs could be created by 2020 could offset any job losses that might come from a decline in the arms industry. It would also allow the UK to sell fewer arms to regimes with poor human rights records.

The report says that the west coast of Scotland is the best site for wave technology in the UK and there are also tidal range options in the region.

According to CAAT, many companies producing arms in the Clyde already make, or have the potential to make, vital parts for developing the wave power industry.

Examples cited include James Fisher Defence – a firm working with submarines – that has worked with Ocean Flow Energy on building a tidal power prototype at its test facility on the Clyde.

A spokesman for CAAT said: “We are always hearing that trident and arms exports are essential for jobs, but that is simply not the case.”

By investing in renewable energy rather than arms, the government could create more and better jobs as well as helping to build a greener and safer world. CAAT Spokesperson

“By investing in renewable energy rather than arms, the government could create more and better jobs as well as helping to build a greener and safer world.”

“We are calling on the UK and Scottish governments to act urgently to get wave technology moving forward through the £200 million investment needed, and to target this at the Clyde region.”

“As well as providing the UK with renewable energy, the UK, and the Clyde in particular, could become the world leader in wave power.”

CAAT believes there is huge potential for the policy as The Carbon Trust estimated that the UK could capture 22 per cent of the marine power market between 2010 and 2050, which could be worth a cumulative £76 billion.

With regards to Type 16 Frigates being built on the Clyde, CAAT says that each vessel was expected to cost some £250 to £350 million but recent reports suggest a sum twice that amount.

CAAT says the initial investment required in wave power could be funded by reducing the number of frigates from 8 to 7 and concentrating the investment in the Clyde region.

The report added this would create far more potential for jobs and exports than the building of another frigate.

It said: “Furthermore, because interest on UK government debt is at record lows, if £200 million of investment in wave was funded through borrowing, it would actually cost the government less than £5 million a year.”

Patrick Harvie, Green MSP for Glasgow welcomed CAAT’s study and said there is a huge opportunity for a new industrial revolution on the Clyde.

He added: “Transitioning from the arms trade to renewables will not only allow for the retention and creation of high quality jobs in the area but allow us to tackle what is the greatest security threat to the UK and the world, that of climate change.”

“The Campaign Against the Arms Trade should be commended for delivering proposals which ensure a just transition, focussed on preservation and growth of employment in the area and on building an industry which is key to a genuinely safer world.”

Stephen Salter, Emeritus Professor of Engineering Design at the University of Edinburgh, studied CAAT’s report and said: “I could not see any mistakes (in CAAT’s report) and would strongly support its objectives.”

“However the political influence of the arms industry, especially the nuclear bit, is very strong.”

“An argument that I find particularly objectionable is that work which might kill many hundreds of millions of people is quite OK if it gives us jobs .”

CAAT said that through looking at individual businesses, it estimates that just over 6000 people are employed in the arms industry across the Clyde region.

In addition, 4500 MoD personnel work at the Faslane nuclear missile base.

Of those arms industry jobs, CAAT says, most of the work is currently supplying the UK military, with only an estimated 500 jobs dependent on arms exports.

The report says that the general trend is for arms jobs to decline, with the one exception being that the UK Navy is moving more of its nuclear powered submarines to Faslane, increasing jobs there.

The report continues: “The Clyde region is a centre for the renewable energy industry in Scotland.”

“Just over 2000 people were employed in the industry in Glasgow in 2013, primarily in the development, maintenance and management of onshore wind farms and small-scale renewables.”

The report notes that wave power development in Scotland is struggling at the moment and says government must support the sector.

It says: “For example, Aquamarine Power has financial difficulties and has retreated back to a skeleton staff.”

“Both wave and tidal power are risk industries.”

“Some private speculators are willing to take on high risks, but only with the prospect of fast returns.”

“Marine renewable energy is high risk, and large returns will only become available over a significant amount of time.”

“There is therefore a strong case for direct government investment in wave and tidal power, so long as this is done in such a way that the public benefit from the returns in the future.”

Aquamarine Power is currently in administration, and ceased trading on November 23 2015.

Tidal power projects are however still under development off the coast of Islay and the North East of Scotland. 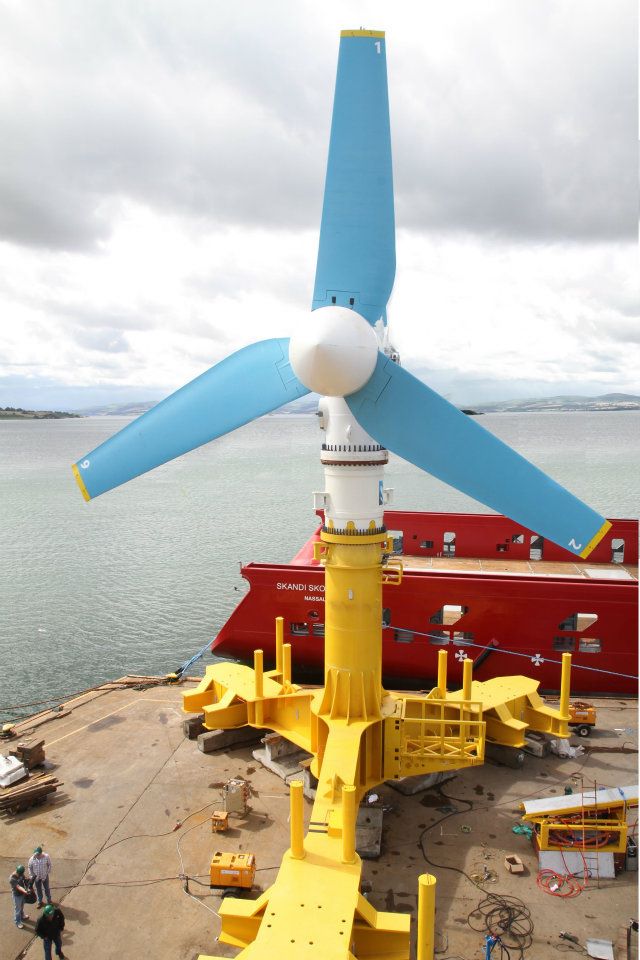 Ric Lander, Friends of the Earth Scotland finance campaigner said Scotland had abundant natural potential for wave energy and that government should be putting national resources into becoming “trailblazers in this field”.

He added that the wave and tidal industry has suffered from some difficult setbacks in recent years so a huge boost, as proposed by CAAT, would help them get back on track.

Lander said: “We know that the impacts of climate change fuel conflict around the world so we would be better directing our resources towards renewable energy solutions.”

“Instead of arming sides in human conflicts, we should be arming ourselves in the fight against global warming. ”

“Harnessing the skills of workers in this industry to decarbonise our energy system will boost the local economy and help to tackle the biggest challenge of our time, climate change.”

“Pension fund members should call on the councils looking after their money to invest in safe, responsible investments that don’t threaten our future.”

“By divesting and moving this money into renewables we can help ensure a just transition for Scotland’s workforce.”

A Scottish Government spokesman said: “The Scottish Government recognises the potential of marine power to contribute to our sustainable energy future and we are committed to supporting the industry overcome the hurdles to successful deployment. Defence is an area reserved to the UK Government.”

In November, shipbuilding unions welcomed confirmation that eight of the UK’s new Type 26 Global Combat Ships are to be built on the Clyde.

The UK government said at the time that the contract would safeguard 1,700 UK jobs, including 600 in Scotland, at both BAE Systems and its supply chain.