The Scottish Government has mistakenly revealed that Nicola Sturgeon refused to meet an Aboriginal nuclear waste protestor in an attempt to avoid political damage – not because she was too busy, as her officials said.

Internal emails uncovered by The Ferret reveal that the First Minister was advised to turn down a request for a meeting in 2018 so as not to become a “focus for criticism”. But officials said the public reason given for her refusal would be “on the standard basis of diary pressures”.

Campaigners reacted with sadness, saying that the Scottish Government’s “ears are closed”. The government stressed that it had “very limited scope” to address the issues raised.

Nuclear fuel was sent from an Australian research reactor to Dounreay on the north coast of Scotland for reprocessing in the 1990s. The resulting radioactive waste, amounting to 51 cemented drums, was originally due to be returned to Australia for disposal.

But under the terms of a waste substitution deal in 2014, Scottish and UK governments agreed that the drums should stay at Dounreay. Instead, the plan is to send four containers of “radiologically equivalent” waste to Australia from the Sellafield nuclear complex in Cumbria.

Two sites have been identified for a planned store for the waste in south Australia – Wallerberdina Station, near Hawker, and Kimber – both of which face opposition from indigenous communities. The Ferret reported in February that Scottish ministers had been advised that they had powers to prevent the waste being exported to protect human rights.

Gary Cushway, an Australian-Scot who has been helping the Aboriginal communities oppose the waste export, wrote to Sturgeon in January 2018. He requested a meeting on behalf of Regina McKenzie, an Adnyanathana Aboriginal woman fighting the proposed nuclear store next to her ancestral home in Wallerberdina.

The First Minister’s office declined the request, citing “considerable diary pressures” as the reason. Campaigners were not offered any alternative way of engaging with the government.

However emails released under freedom of information law show that officials wanted to “draw a line under this case” to minimise negative media coverage.

The Scottish Government meant to keep most of the text of the emails hidden by blacking out, or redacting, paragraphs. But every word can be read by simply copying and pasting the text into another document.

“My answer to the first minister is sadness,” McKenzie told The Ferret: “I hoped they would listen, but their ears are closed. I will not think negatively of Scotland as I too have Scottish heritage that I am proud of.”

The Scottish Government released the poorly redacted email chain between three government officials, following an internal freedom of information review. The first email on 19 February 2018 was to colleagues from Charles Stewart Roper from the government’s Environmental Quality Division.

He outlined the “saga” surrounding the return of Australian waste, referring back to a 2017 meeting between Cushway and officials. Media coverage by Cushway’s “friendly journalist” had been “misleading” and “critical” of government, Roper said.

“We now have a new request for a meeting in the summer with the First Minister for an individual woman from the indigenous Australian community. We shall be recommending that this request is declined (on the standard basis of diary pressures),” he added.

“There is a real risk that this decline will provoke another critical story. However, in this case it is really on a matter of when we face further criticism, and not whether we do, and it is better to draw a line under this case.”

Roper concluded: “The criticism is coming our way because we have been willing to engage, and the more we engage the more we become the focus for this criticism.”

Stuart Nicolson, Sturgeon’s senior political spokesperson, responded agreeing that “there would be little if anything to be gained by offering a meeting with the FM (or any other minister).” He asked communications staff to “update lines to make very clear that these are primarily issues under the control and responsibility of the Australian and UK governments.” 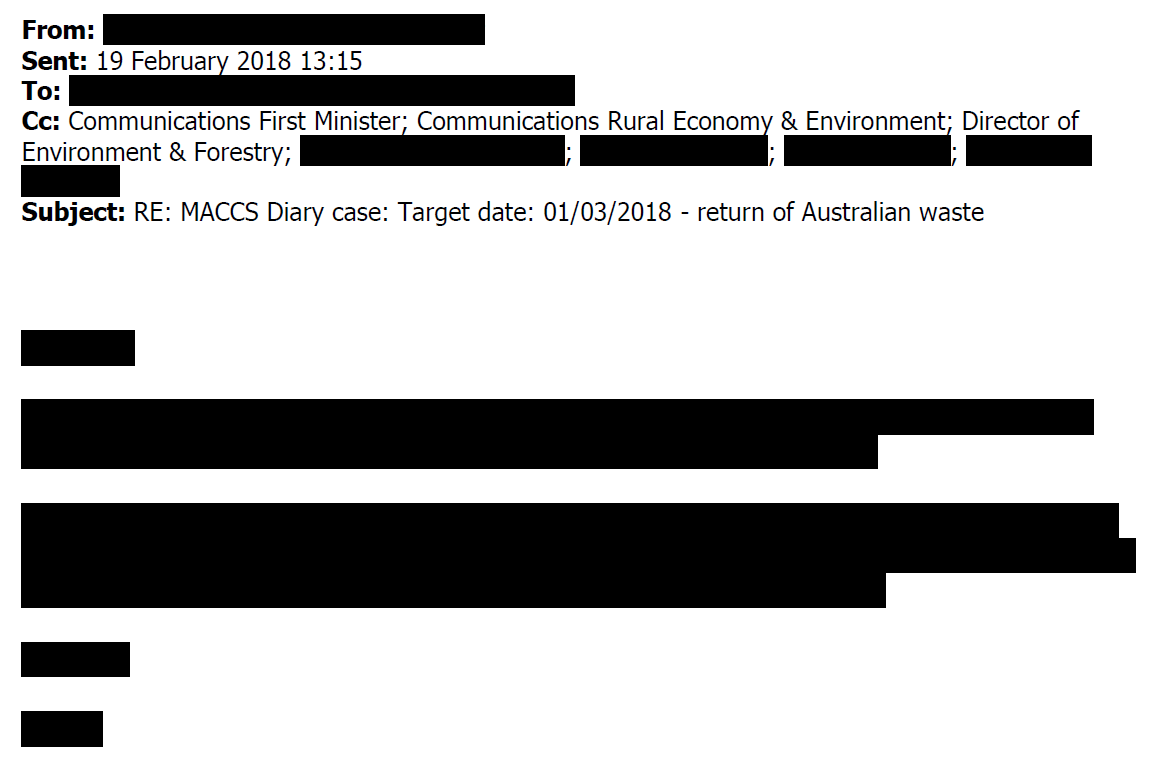 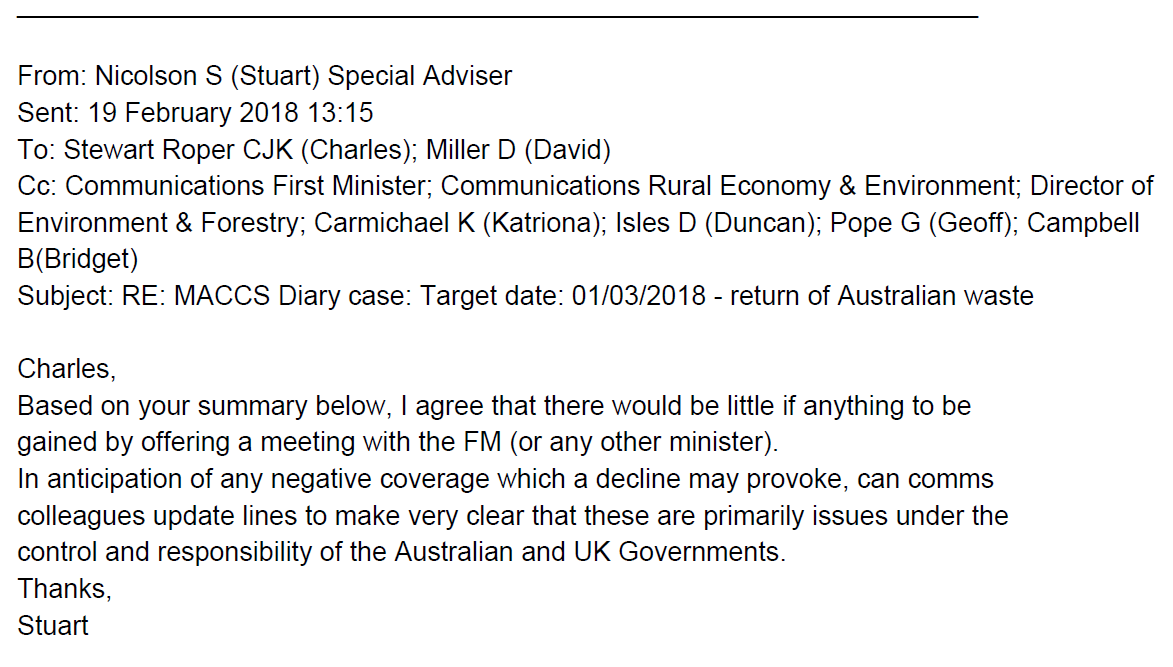 David Miller, ministerial political adviser on the environment at the time, agreed that a meeting with Sturgeon “would not be appropriate”. But he added that he was “not entirely convinced by [Roper’s] assertion that we are facing criticism on this issue because we have been willing to engage to date.”

Miller warned that the decision to decline a meeting could lead to questions in the Scottish Parliament. “Is there any further course of action open to the Scottish Government which would allow it to demonstrate that it is taking the views of First Nation campaigners seriously?” he asked.

“Could we, for example, seek an assurance from the UK or Australian governments that this waste would not be stored on Aboriginal lands?
Alternatively, could we ask the UK government to ensure the Australian government carries out some form of human rights assessment of the implications of the proposed transfer?”

In his reply, however, Roper rejected Miller’s suggestions. UK government colleagues were “fairly robust” in their view that the nuclear waste was the responsibility of the Australian authorities, he said.

“I do not think that the UK government would wish to place formal conditions on the Australian authorities, such as demanding a human rights assessment.”

The Scottish Government had been “extra helpful in allowing waste substitution so that the waste can be in a form that the Australian authorities find easier to handle,” Roper argued.

“So, no I do not see any sensible course of action open to us to demonstrate our sympathy for the concerns of this First Nation individual.” 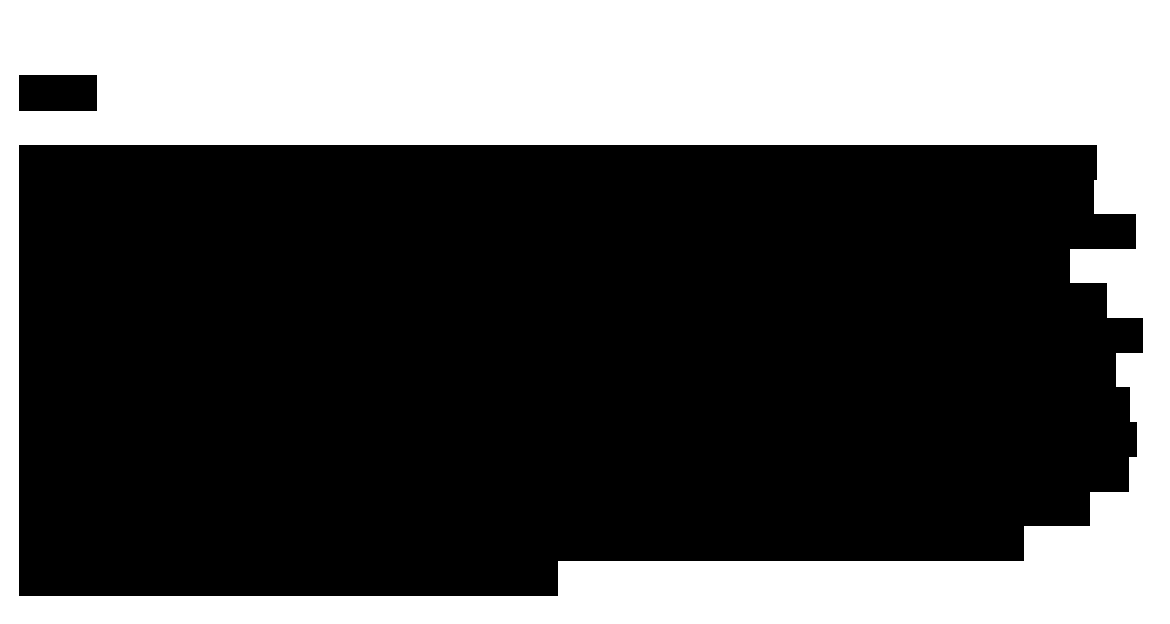 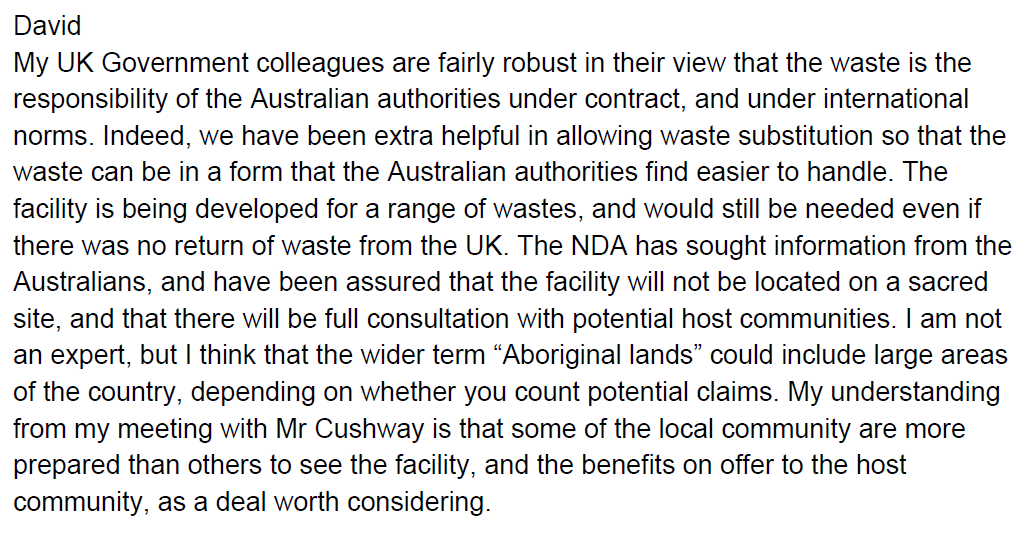 According to Cushway, the Scottish Government deserved some praise for looking into the issue, in contrast to the UK government which refused to engage at all. “However, it is disappointing that a decision has been made to try to avoid criticism rather than face these challenges honestly,” he said.

“Scotland still has an opportunity to lead the way in ensuring that the Australian government fulfils its obligations to the indigenous people who remain custodians of their own lands.”

The Scottish Liberal Democrat leader, Willie Rennie MSP, accused the government of being “more concerned with spin and media manipulation than moral or environmental concerns.”

Constituents had been in touch, concerned about what the transfer of the nuclear waste said about Scotland’s commitment to being a “good global citizen”, he said

“At the very least Nicola Sturgeon owes campaigners an honest explanation about why she has refused to meet with them.”

Peter Roche, an anti-nuclear campaigner and member of Nuclear Waste Advisory Associates, thought the e-mails showed that the UK and Scottish governments were insistent that the nuclear waste should be returned to the sender. “They are not willing to place any further conditions on the treatment of that waste for fear that the Australians will refuse to accept it,” he said.

The Scottish Government didn’t comment directly on Sturgeon’s refusal to meet McKenzie. “We sympathise with concerns relating to the location of the planned radioactive waste facility in Australia, but we have very limited scope to address the issues the campaigners are concerned about,” said a spokesperson.

“The siting of the Australian waste storage facility is a matter for the Australian authorities, and we would urge them to give full consideration to the concerns being expressed by the aboriginal community.”

The spokesperson added: “No waste is moving from Scotland, and the Scottish Environment Protection Agency has confirmed the relevant competent authority for waste moving from Sellafield is the Environment Agency for England and Wales.”

The documents in full – redacted and unredacted

Request for meeting from Gary Cushway