Revelations that an underground coal gas plant in Australia is facing prosecution for allegedly contaminating over 300 square kilometres of farmland have sparked fears that the same could happen in Scotland.

The Queensland government has launched a £3 million criminal court action accusing a mining company of leaking toxic chemicals and potentially explosive gases into the soil, water and air from a facility at Chinchilla, west of Brisbane. The charge sheet, seen by The Ferret, says the contamination is “extensive and widespread” and that the harm caused is “irreversible”.

The technique of burning coal underground to extract gas for commercial use in Australia, known as underground coal gasification (UCG), is now planned for the Firth of Forth and the Solway Firth. Community and environmental campaigners fear it could be disastrous, and are stepping up their demands for UCG to be included in the Scottish Government’s fracking moratorium.

The companies proposing UCG in Scotland, however, say that their technologies will be different, deeper underground and safer. The Australian firm facing the contamination charges strongly denies them.

In February the Queensland government imposed a 314 square kilometre “caution zone” around experimental UCG plants operated by Linc Energy in Chinchilla between 1999 and 2013. Digging below two metres is banned because of risks from explosions and pollution.

The government has charged that Linc “caused serious environmental harm”. The adverse effects included releasing contaminants to the soil and atmosphere in concentrations “above the explosive limits” and “above prescribed health and environmental investigation limits”, it alleged.

They wilfully and knowingly undertook the operation, and they knew this could lead to catastrophic events. Jon Black, Queensland government

The company could face multi-million pound fines and senior executives could go to jail, according to Jon Black, a senior environment official with the Queensland government. “They wilfully and knowingly undertook the operation, and they knew this could lead to catastrophic events,” he told the Australian Broadcasting Corporation (ABC).

According to a leaked expert report, air injected under pressure into underground coal seams caused surrounding rock to fracture. When the coal was set alight, gases such as methane, carbon monoxide, hydrogen and hydrogen sulphide spread through the ground.

ABC also reported that four government investigators were hospitalised with suspected gas poisoning after testing soil at the site in March. High levels of carbon monoxide were detected in the blood of one, who was said to have suffered prolonged nausea.

The UK Coal Authority has granted two companies licences to investigate UCG in five areas around the Firth of Forth, and a sixth area in the Solway Firth.

Campaign group Frack Off has drawn up maps to illustrate the areas that might be contaminated if an incident similar to that in Australia happened at one of the proposed UCG sites in Scotland. Covering 300 square kilometres, they include half of Edinburgh, Falkirk and large parts of Fife.

If it happened in Scotland… 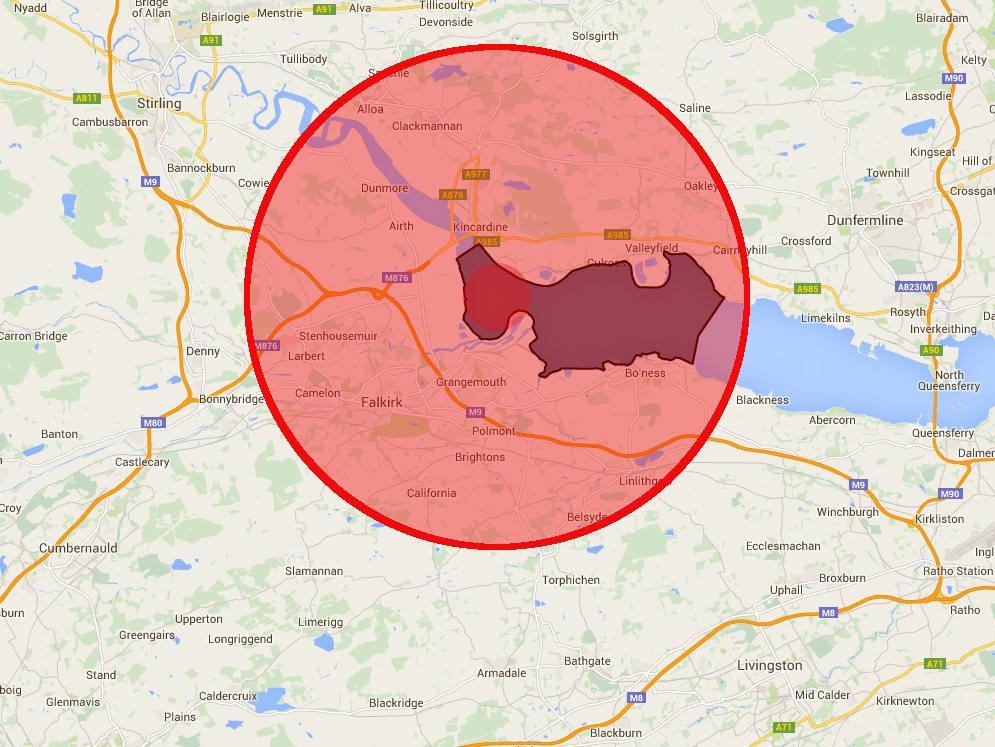 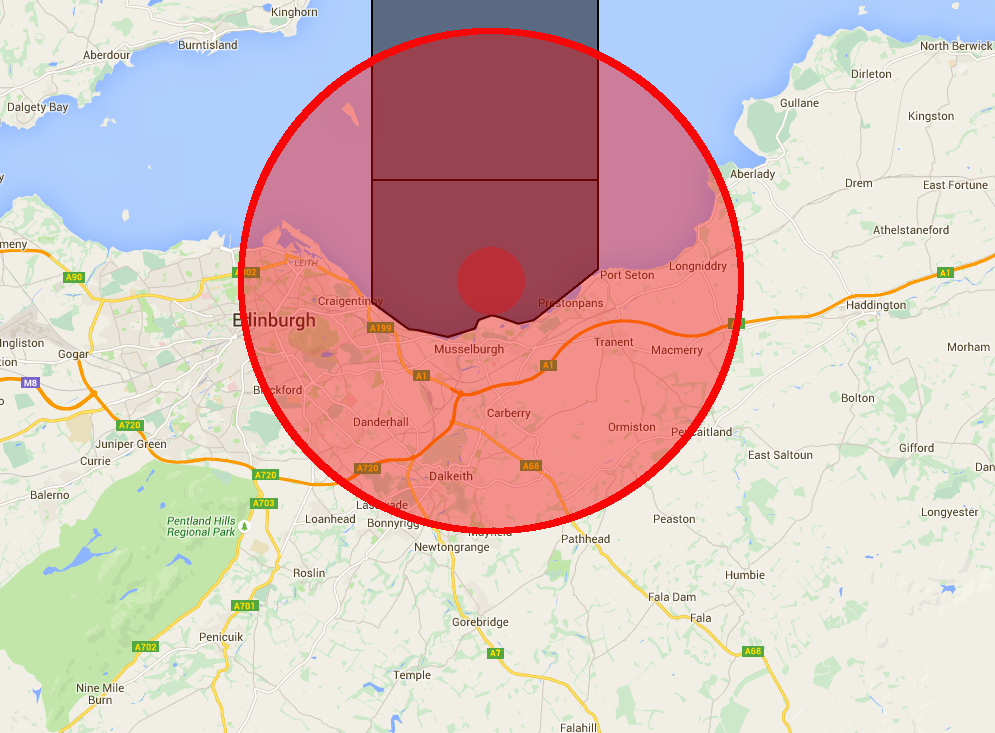 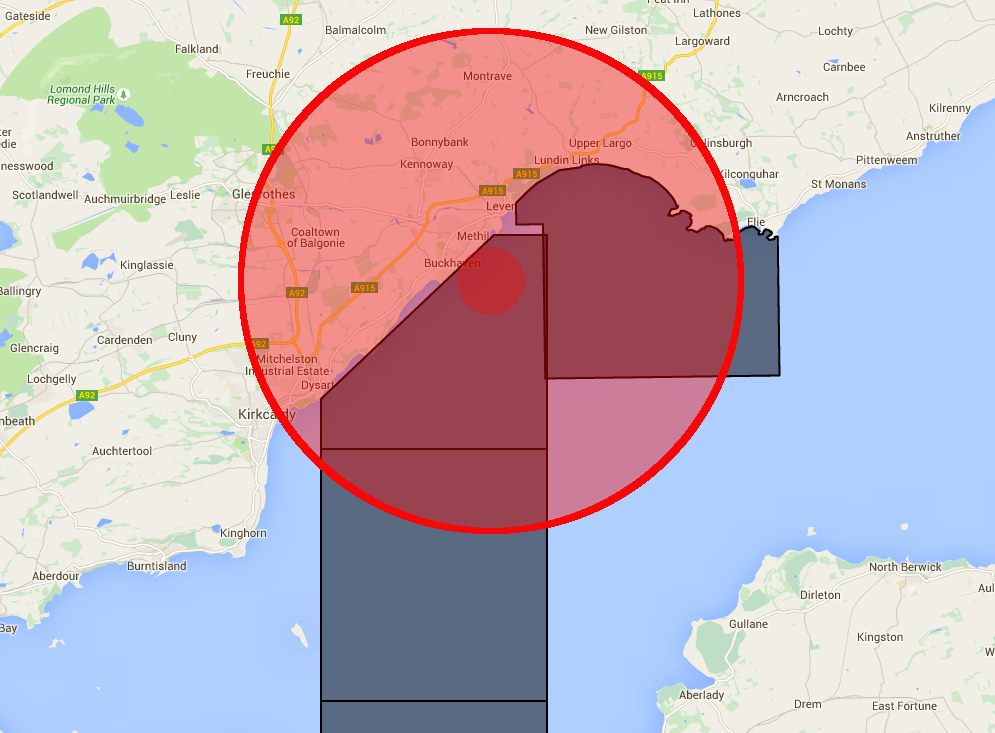 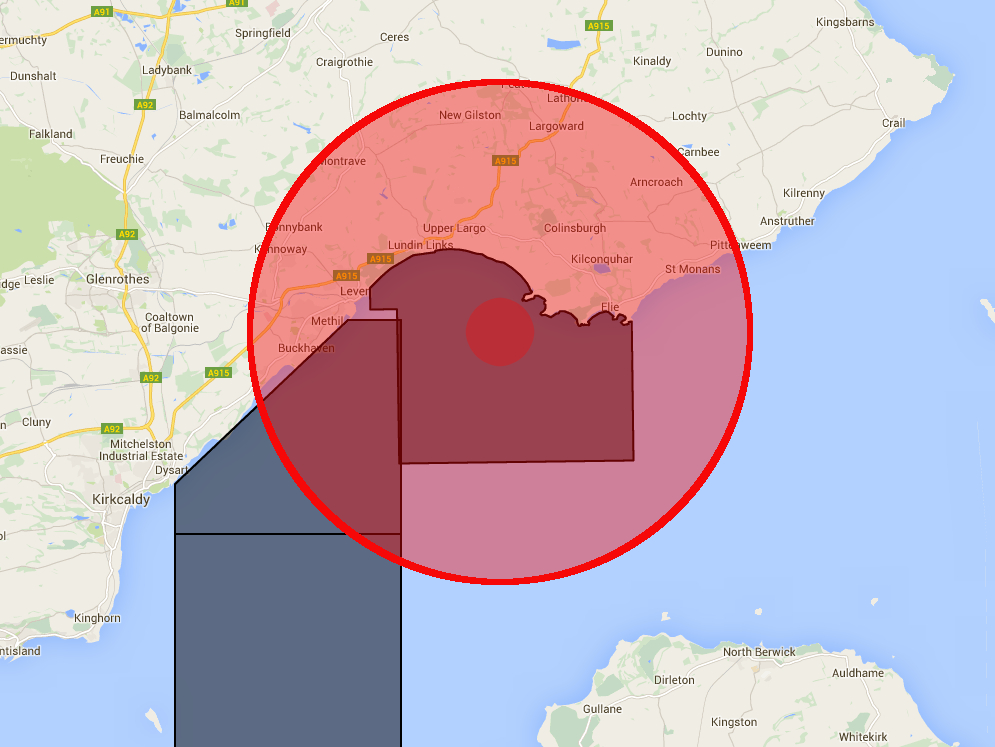 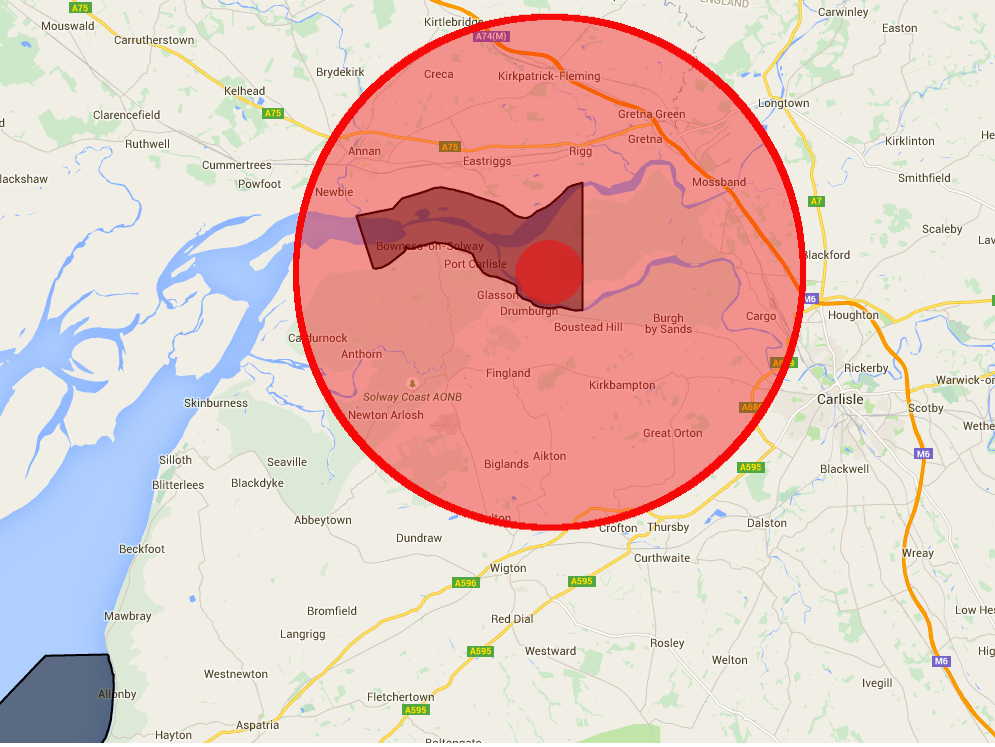 Flick Monk, a campaigner with Friends of the Earth Scotland, warned that the failed Australian UCG experiment showed “the potential for disaster” in Scotland. “We’d have to be crazy to risk allowing anyone to try burning the coal beneath the Firth of Forth,” she said.

“The UCG enthusiasts in Scotland will no doubt try to tell us that everything is different in Queensland. But the bottom line is that Linc successfully convinced authorities that what they were planning carried very little risk – and the result was a huge contamination disaster.”

Local campaign groups reiterated their calls for UCG developments to be banned as part of the Scottish government’s moratorium on fracking and unconventional gas. “Communities won’t understand why they aren’t being afforded the same protections as those threatened by other forms of unconventional gas,” said Juliana Muir from Our Forth in Portobello.

Audrey Egan from Frack Off Fife warned that UCG would threaten the fishing, agriculture, leisure and tourism industries around the Forth. “The same process that catastrophically failed in Australia is being proposed here,” she said.

Robert Gatliff, the director of energy and marine geoscience at the British Geological Survey in Edinburgh, accepted that there could be problems. “There are well-documented concerns about the potential environmental impacts of UCG and careful analysis of the Australian study and other published research on overseas projects will be required ahead of any proposed development in the UK,” he said.

UCG companies, however, insisted that what had happened in Queensland couldn’t happen here. Cluff Natural Resources, which has three licences in the Forth and has said it will apply to start test drilling off Kincardine next year, issued a detailed statement (see below).

It accepted that widespread pollution could have been caused by the “failed UCG project” in Queensland. But it pointed out that official tests of drinking water, rivers and groundwater in June had not found any breaches of health guidelines.

The Queensland plant had been gasifying coal 120-140 metres beneath the surface, but UK authorities had recommended it should only be done at a depth of 600 metres or more, the statement said. Cluff was planning to exploit coal seams at a depth of 1,000 metres.

The operation proposed in Scotland would not involve the use of high-pressure air, making fracturing less likely, Cluff said. “The rigorous site selection process and design of the company’s subsurface infrastructure ensures that the very specific operational issues, which allegedly resulted in the contamination of soils around the Linc Energy site, could not be replicated at the proposed Kincardine UCG site.”

Five Quarter, which has two licences in the Forth and one in the Solway and is backed by the UK’s largest private landowner, the Duke of Buccleuch, took a similar line. “The setting, engineering and processes involved in activities in Australia are entirely different from those developed by our company,” said chief executive Dr Harry Bradbury.

Linc Energy has angrily contested the charges made by the Queensland government. “Linc Energy strongly rejects the allegations that its UCG demonstration facility has caused serious environmental harm,” said a statement from the company.

“Linc Energy is firmly of the view that the department commenced these proceedings without sufficient scientific evidence and, based upon our detailed knowledge of the operations and environment at our demonstration facility, that the allegations were taken out of context and/or are simply incorrect.”

The setting, engineering and processes involved in activities in Australia are entirely different from those developed by our company. Dr Harry Bradbury, Five Quarter

Linc further accused the government of wasting taxpayers’ money by a “monumental mishandling of Queensland’s strained financial resources”. The most likely cause of the contamination was ”naturally occurring sub-soil processes”, it argued.

The Scottish Government insisted that UCG development had to be consistent with environmental objectives. “No planning applications for UCG have been submitted in Scotland,” said a spokesman.

“If any application were submitted, it would be subject to the same careful, rigorous and evidence-based approach that we are adopting for unconventional oil and gas.”

A version of this article first appeared in The National on 17 August 2015.