An investigative journalist in Pakistan has received death threats from the Taliban and survived an armed kidnapping attempt for reporting on terrorist organisations.

Arshad Mehmood is a Pakistani journalist and human rights activist who lives in Gujar Khan, a small city about 30 miles from the nation’s capital, Islamabad.

He is editor of a weekly newspaper called WAQA e NIGAR and freelances for other media including a Pakistan news channel called AAJ.

At least 57 journalists have been killed in Pakistan since 1992, according to the Committee to Protect Journalists, and the Pakistan Taliban said last week that reporters would be targeted, a new threat that followed a suicide attack in Lahore that killed 70 people at Easter.

Arshad is President of the Regional Union of Journalists and vice president of Pothwar Press Club in Gujar khan.

He contacted The Ferret and asked that we highlight his situation to raise awareness of the desperate security situation faced by himself and many other journalists across Pakistan.

Arshad says he is under threat because of his journalism. This includes a news broadcast telling the story of a Pakistani soldier who was killed during the Peshawar school massacre on 16th December 2014.

During the massacre at the Army Public School, the Pakistan Taliban murdered 132 children and 18 adults, a mass killing that prompted condemnation and outrage across the world.

Arshad’s report for AAJ a few days later told the story of Nadim-ul-Hassan who was killed while trying to save children.

Arshad told The Ferret: “I did an exclusive package about a soldier who lost his life while protecting school kids. This package was aired on AAJ on 18-19 December.”

“A few days later some unknown person/s dropped a letter at my home, threatening that I would be hung in public for my story. The matter was reported to the police but they did not investigate.”

“Then, on the 3rd May 2015, I was on my evening walk near my village when some unknown bikers tried to kidnap me at gunpoint. I was very lucky to escape and also reported this to police in Gujar Khan. For the past year now I have been extremely frightened and suffering from stress and depression.”

He added: “I am very strong believer of freedom of expressions but unfortunately I am being restricted (with my work) because of these people. I have four daughters and two are aged under 10 years old. Reporting and journalism is in my blood and I can’t stop. But the police has failed to protect me and my family. Please help me.” 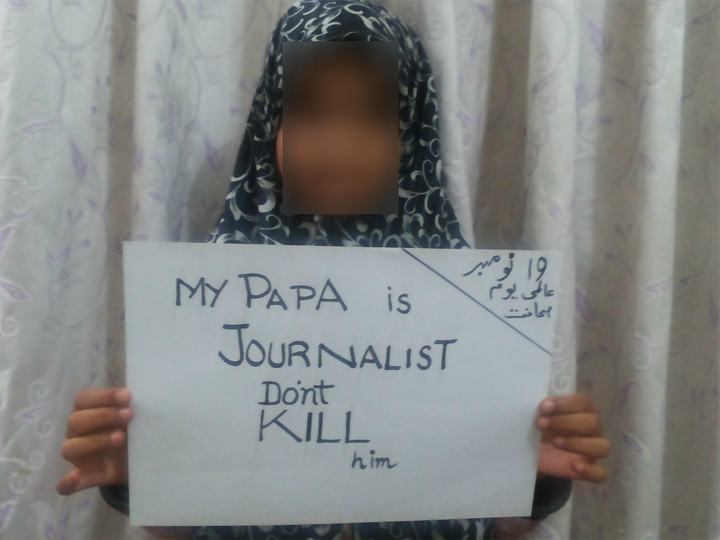 Arshad said he lives with the constant fear that he, or a member of his close family, could be killed at any time. He says that the authorities have failed to offer any protection.

He said he has no trust in the police in Pakistan as they often assist “criminal groups/mafias.”

The threat to Arshad’s life was reported by The Nation, an English language daily newspaper in Lahore, Pakistan.

Investigative reporter Israr Ahmed wrote the story which mentioned the letter, written in Urdu, that was sent to Arshad threatening both him and his family.

He quoted the letter as saying: “Raja Arshad, you despite knowing that who is real terrorist are speaking a lot against militants on TV channel and social media and urging the government to hang militants in public.”

“Now we will tell you as to how somebody is hanged in public. We have seen your house and soon your family members will also appear on TV like the family members of Nadim-ul-Hassan.”

Ahmed’s report also detailed threats made to another journalist called Malik Amir Wazir, a correspondent for Nawa-i-Waqt in Gujar Khan.

Wazir also received a threatening letter. According to The Nation both threats were reported to the authorities.

Following his article for The Nation, Ahmed said he was then threatened by police for highlighting the threat made to Arshad.

Under threat from all sides

Threats to Ahmed, Arshad and other Pakistani reporters, have also been highlighted by Reporters Without Borders (RSF) last July.

RSF said: “Israr Ahmed, a crime reporter for The Nation daily in Punjab province for the past seven years, has long been living in fear as a result of being hounded by both the police and gang members in connection with his coverage of drug trafficking in Rawalpindi.”

“After he survived a murder attempt in 2012, the police failed to provide him with protection and did not even investigate the murder attempt.”

“The police threatened him after he reported that fellow Punjab-based journalist Raja Arshad had received threats. Then, in March of this year, he was ordered to pay 300 million rupees as a result of a legal action.”

“Finally, he was arrested on a rape charge in April, although the rape victim did not identify him as her assailant, and he was tortured while being held. The police allegedly make frequent use of bogus rape charges as a method of intimidation.”

“Its use against Ahmed along with the previous threats seems to indicate that the police were determined to persecute him and constitutes yet further evidence of the desperate plight of Pakistani journalists, who are not only not protected by the police but are often hounded by them.”

“Arshad, who works for Aaj News TV, was threatened in connection with his coverage of reactions to a December 2014 attack on a Peshawar school in which more than 100 people were killed. He got no help or protection from the local police after a mob came to his home.”

The danger facing reporters in Pakistan was again highlighted last week by the Committee to Protect Journalists who published a piece on 1st April 2016.

This followed the latest suicide attack by the Pakistan Taliban when 70 people were killed and hundreds maimed in a suicide attack in Lahore on Easter Day.

CPJ’s story cited a Pakistan Taliban spokesman called Ehsanullah Ehsan who was quoted as saying: “Everyone will get their turn in this war, especially the slave Pakistani media We are just waiting for the appropriate time.”

Direct threats from terrorists are not new for the country’s press, the CPJ said, adding that concern for the security of journalists in Pakistan was the impetus for a CPJ mission to the country two years ago, during which Prime Minister Nawaz Sharif pledged to take several steps to improve press safety.

But today many Pakistani reporters still fear for their lives.

“The threats come by text, phone, sometimes on social media. And it’s typical that the cases are not investigated, either.”

“Some journalists assume it is part of the job, others self-censor to keep themselves out of trouble. It’s a never-ending danger and our Pakistan page is really just a steady stream of these sorts of incidents.”

Similar concerns were also highlighted by Reporters Without Borders (RSF) who mentioned Arshad in a report last July on the security problems faced by journalists generally in Pakistan.

RSF said then: “Pakistani journalists are being forced to flee or go into hiding to escape acts of violence and intimidation that usually go unpunished. The authorities have not kept their promise to protect media personnel and are sometimes even responsible for these abuses.

Rob Edwards, chair of The Ferret, said: “Journalists in the UK often face threats of legal action from powerful people but rarely do we have to face the levels of violence and threats experienced in Pakistan.”

“Pakistani colleagues should be allowed to report without fear of reprisals, and of being killed, and the authorities should protect all reporters working in the public interest. The Ferret supports journalists facing intimidation because of their reporting, wherever they may be.”