A key feature of campaigning before the independence referendum in 2014 was the future of Scotland’s shipbuilding industry.

Supporters of the union argued that a vote for independence would be devastating to shipbuilding, while pro-independence campaigners suggested the Westminster government had negatively impacted the industry.

Three years on from the vote, the First Minister Nicola Sturgeon has joined unions in claiming that a promise of shipbuilding contracts for 13 frigates to the Clyde yards before the referendum had not been delivered.

On 6 September, the UK Government announced the first batch of five new Royal Navy frigates would be open for bids across the UK. The GMB union called the move a “betrayal” as the orders were not given to the Clyde shipyards.

The First Minister echoed the union concerns, saying UK government “promises” had not been honoured.

I think people should be looking to the UK government and reflecting on the fact there has been lots of promises made to the Clyde but more often than not those promises are broken. It is only a couple of years ago that workers were being promised a frigate factory on the Clyde First Minister Nicola Sturgeon

Ferret Fact Service assessed this claim and found it to be Mostly True.

The announcement, made by defence secretary Michael Fallon, was for the first batch of five Type 31e frigates to be built at sites across the UK.

Recommendations from a review of the UK’s shipbuilding strategy were accepted by the government. This means the ships will likely be built in sections which can then be assembled at a central hub.

This system has already been used for the 65,000-tonne HMS Queen Elizabeth, which was built in blocks in six British cities then assembled at Rosyth dockyard in Fife.

GMB Scotland, which represents workers in the Clyde shipbuilding industry, claimed it had been promised 13 frigates and a factory by UK government official before the independence referendum. The First Minister then reiterated the point about a frigate factory being built.

Their points are based on statements from government officials in the previous Conservative administration and No campaigners in the Scottish independence referendum in the run up to the vote in September 2014.

Then-defence secretary Philip Hammond confirmed in parliament that 13 Type 26 frigates were to be built, with the work set for BAE’s Scotstoun and Govan facilities, but no contract due to be signed until after the referendum.

He said BAE’s “judgment, on the basis of value for money, is that the Clyde is the best place in which to build the Type 26 global combat ship, and the MOD concurs with that judgment.”

BAE also confirmed it had agreed with the MoD “that Glasgow would be the most effective location for the manufacture of the future Type 26 ships”.

A Scottish Affairs Committee report in January 2013 concluded: “If the result is a ‘No’ vote, we believe that the [Type 26] work will be carried out on the Clyde.”

However, the Strategic Defence and Security Review in 2015 reduced the number of Type 26 ships from 13 to eight, which will be built at the BAE yards. It announced “the introduction of eight advanced Type 26 Global Combat Ships, which will start to replace our current Type 23 frigates in their anti-submarine role.”

In addition, at least five ships in a “new class of lighter, flexible general purpose frigates” were to be built. These were later named as Type 31e frigates, but work has yet to start on construction.

While it was initially indicated that these would also go to the Clyde shipyards, on 6 September current defence secretary Michael Fallon announced these frigates were to be built at sites across the UK.

This followed the advice of an independent report on the national shipbuilding strategy, the Parker Review, in November 2016. It suggested the new Type 31e ships should “provide significant work for a range of competitive regional UK shipyards.” 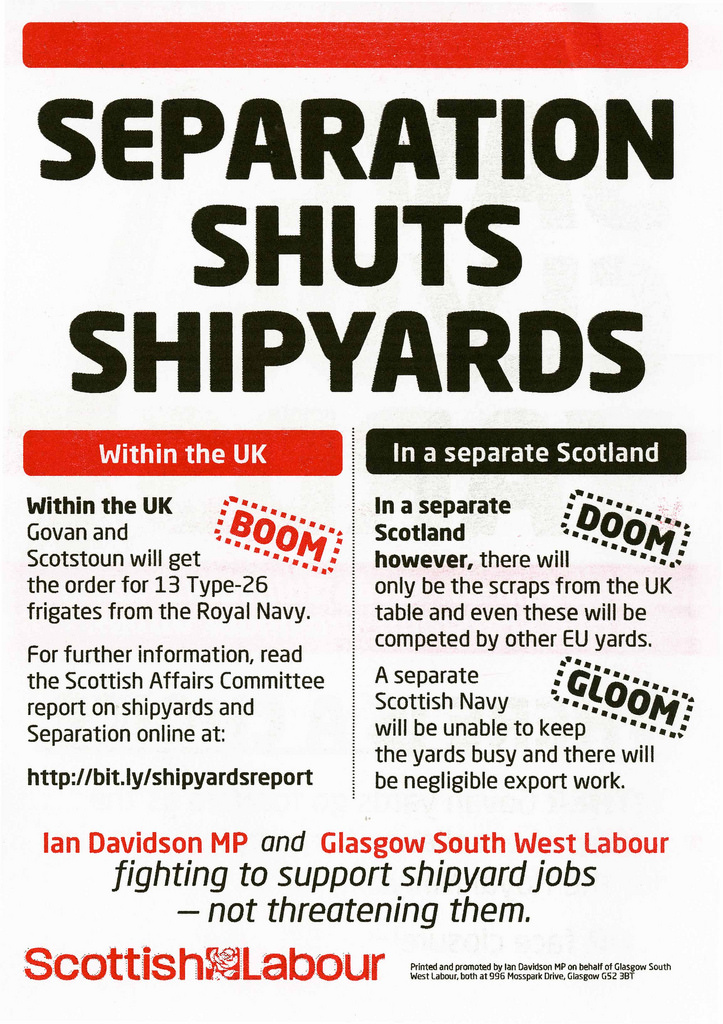 Leaflet distributed ahead of the Scottish independence referendum

Public statements from UK government ministers did indicate the Type 31e frigates were headed to the Clyde shipyards.

Michael Fallon said on 4 November 2016: “Nobody is short-changing the Clyde. This is a huge moment for the Clyde today; we’re confirming we’re going ahead with the steel cut next summer, earlier than expected.

“We pledged a fleet of frigates and destroyers [to the Clyde]. The first eight will be the Type 26 combat ships. After that, we will be building a lighter frigate [the Type 31e], and we will end up with a fleet that is larger than the fleet at the moment.”

This was also backed up by the then Prime Minister David Cameron. He said on 23 November 2015: “Scotland will get the chance to build more than 13 new ships.”

In a response at Westminster on 26 January 2015, junior defence minister Lord Astor of Hever, said: “We have been clear that from 2015 the Clyde will be the UK’s only shipyard that builds complex warships.”

It is accurate then, to say that it had been indicated to shipyards on the Clyde that 13 frigates (Type 31e and/or Type 26) would be built there.

The eight which are now guaranteed to the yards is around 60 per cent of the original plan. The first three frigates were contracted to BAE in early 2017 in a £3.7bn deal.

Nicola Sturgeon’s claim that a “frigate factory” was promised is less clear cut.

In February 2014, BAE Systems announced plans for a £200m ‘state-of-art’ single-site factory in Scotstoun. This was in anticipation of the order for 13 new frigates promised to the yards before the referendum.

However, the company suggested the factory was the preferred of two options for investment on the Clyde.

The second was “a two site strategy, involves expanding and improving existing facilities at Govan and Scotstoun.”

It was revealed in February 2017 that the dedicated factory plan had been scrapped, with a smaller level of investment instead being put into the two shipyards due to the order from the MoD.

It is arguable whether this amounts to a promise of a frigate factory being built when two options were publicly announced by BAE systems, and some investment has been put into the yards.

There were clear indications from government ministers during the referendum period that contracts to build 13 frigates were headed to the Clyde. While no official contracts were signed, public statements were made which suggested Govan and Scotstoun yards would receive this work. However, promises regarding a ‘frigate factory’ were not so clearly indicated, with BAE publicly exploring two options for investment.

Ferret Fact Service (FFS) is a non-partisan fact checker, working to the International Fact-Checking Network fact-checkers’ code of principles. All the sources used in our checks are publicly available and the FFS fact-checking methodology can be viewed here. Any questions or want to get involved? Email us at factcheck@theferret.scot or join our community forum.

The Scottish Government did provide evidence in response to a Ferret Fact Service request.