Lethal exhaust fumes linked to degenerative brain diseases have polluted busy streets across Scotland in breach of safety limits, according to the latest official monitoring.

Environmentalists say that air pollution kills 2,500 people a year in Scotland. It has long been known to increase the risks of heart attacks and strokes, and to worsen lung diseases such as asthma.

There are now growing concerns that it could also cause brain damage. One scientific study published in The Lancet this month found that people living near a busy road have an increased risk of suffering dementia, with one in ten Alzheimer’s cases associated with heavy traffic.

Another study last year led by the University of Lancaster discovered toxic nanoparticles from air pollution in the brain tissue of 37 people. The particles were made of magnetite, which other research has implicated in causing Alzheimer’s disease.

But government air pollution monitors in Scotland show that safety limits meant to have been met six years ago are being still breached in many cities and towns. The number of air pollution zones designated by Scottish local authorities has also risen from 33 to 38.

“Our addiction to cars is killing us,” said Emilia Hanna from Friends of the Earth Scotland. “But it’s those who tend not to drive who are worst impacted by the pollution: children, the elderly, and those living in poverty.”

An analysis of the monitoring results by Friends of the Earth Scotland reveals that the most polluted place is Hope Street in Glasgow. There, average levels of the toxic gas nitrogen dioxide in 2016 were 65 micrograms per cubic metre, more than 60 per cent over the legal limit of 40.

The nitrogen dioxide limit was also exceeded on Dumbarton Road in Glasgow, and on St John’s Road and Queensferry Road in Edinburgh. In Aberdeen the limit was breached on Wellington Road and Union Street, in Dundee on Seagate, in Cambuslang on Main Street and in Perth on Atholl Street.

The legal limit on tiny particles known as PM10s was also exceeded on Salamander Street in Edinburgh, King Street in Aberdeen, High Street in Crieff, West Bridge Street in Falkirk and Glasgow Road in Edinburgh. Both the nitrogen dioxide and PM10 limits came into force in 2010.

Scotland's most polluted streets in 2016

sources: scottishairquality.co.uk and Friends of the Earth Scotland

Other streets that have breached the limits in the past failed to record sufficient monitoring data in 2016 for the annual average to be calculated. They included Lochee Road and Whitehall Street in Dundee, as well as Brandon Street in Hamilton and Main Street in Chapelhall, North Lanarkshire.

New air pollution zones have been declared in Johnstone, Renfrew, Linlithgow and Newton in West Lothian. Another at Salamander Street in Edinburgh is due to come into being later this month.

The UK government has been ordered by the High Court to improve its “woefully inadequate” plans to combat air pollution. “The Scottish Government has a duty to ensure that people in Scotland can breathe clean air,” said Alan Andrews, a lawyer with the environmental group, ClientEarth, which took the UK government to court.

“If the Scottish Government fails to take action it will be failing in its legal duty to protect the people of Scotland and will leave itself wide open to legal challenges in the Scottish courts.”

Dr Sean Semple, an air pollution expert from the University of Aberdeen, described the persistent failure to meet air pollution standards as “disappointing”. Measurements show that small increases particle pollution were associated with a 5-10 per cent increase in deaths from heart and lung conditions, he pointed out.

“Inhaling fine particles and gases such as nitrogen dioxide at the levels reported in these streets has been shown to be associated with increases in mortality and ill-health, and with poorer quality of life,” he added.

“To improve air quality we need to consider restrictions on car use, particularly for short journeys, and look at ways of rebalancing our approach to personal transportation in favour of public transport, walking and cycling.”

Friends of the Earth Scotland accused the Scottish Government of failing to tackle the “public health crisis” caused by air pollution. “It is pouring billions of pounds into road building, which keeps the car dominating transport choices,” said Hanna.

She also attacked ministers’ for not funding promised “low emission zones” in cities. “Councils will be reluctant to introduce a low emission zone unless they know there will be funding to help set them up,” she argued. 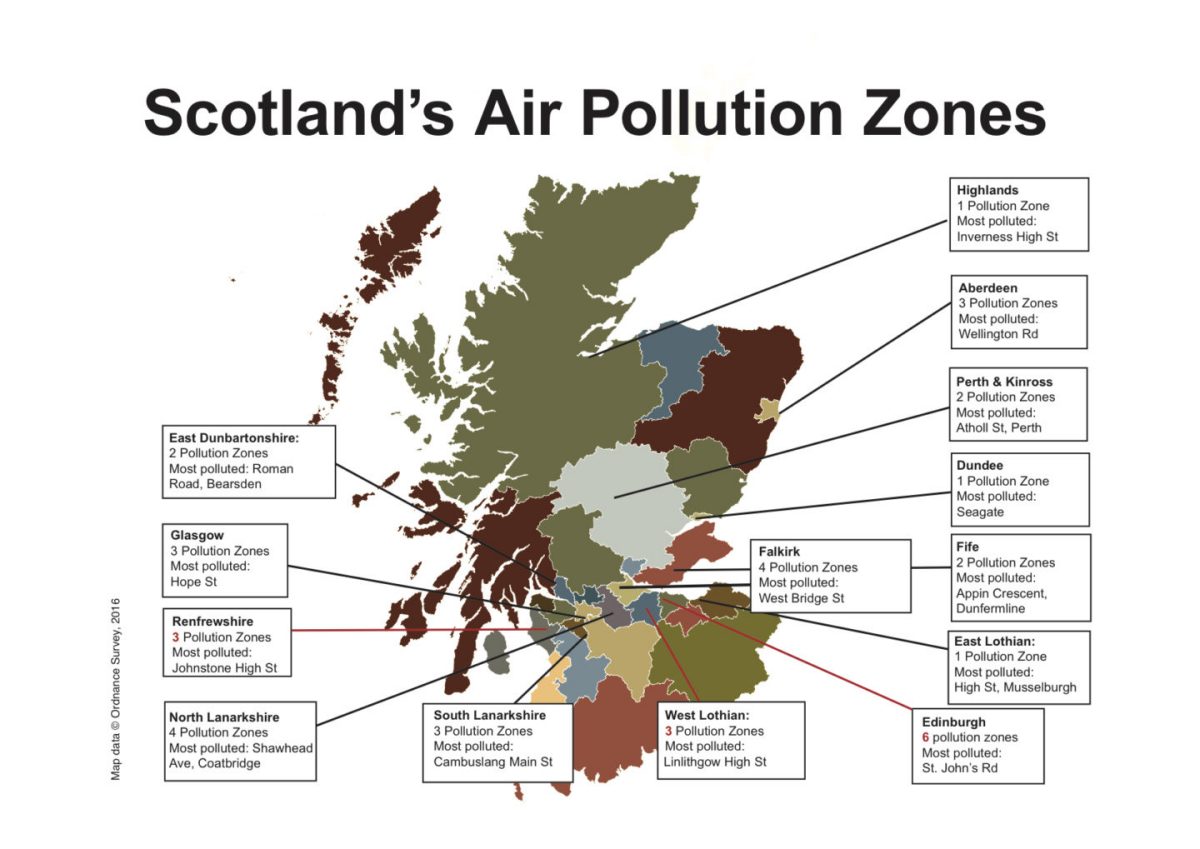 The Scottish Government stressed that it was working with local authorities to ensure that Scotland’s first low emission zone was in place next year. Ministers had also backed a £14.5 million fund for low-emission buses and were creating “one of the most comprehensive electric vehicle charging networks in Europe”, said a spokesman.

Scotland’s cleaner air strategy set out an “ambitious” programme of action, he added. “Scotland is the first country in Europe to adopt in legislation the WHO guideline value for particulate matter 2.5 – a pollutant of special concern for human health.”

Local authorities insisted that air pollution had decreased in recent years in their areas. Glasgow City Council stressed that it had been involved in developing a clean air strategy for Scotland that was “working towards a national low emission framework.”

But the council’s environment executive member, Bailie Elaine McDougall, said: “The powers to implement or enforce the most significant measures to address air quality – for example fuel taxes, minimum engine standards and the power to regulate buses – are not held by local authorities.”

The City of Edinburgh Council pointed out that it had been praised by environmentalists for the measures it had taken to cut congestion and encourage walking and cycling. Most streets in Edinburgh met the nitrogen dioxide limit, the council said, and pollution was decreasing.

“We have no intention of resting on our laurels and we will continue rigorous monitoring of air quality management areas in order to best direct resources,” said the city’s environment convener, councillor Lesley Hinds.

He said: “Local authorities are awaiting guidance on the national low emission framework which will prescribe the methodology authorities should follow to predict future pollution levels and the requirement for low emission zones and other measures to further improve air quality.”

Jean Nelson (59) from Glasgow has suffered from chronic obstructive pulmonary disease for 17 years. She has to use a nebuliser about four times per day and sometimes finds it difficult to walk.

Cars are choking the city. A lot of people are dying unnecessarily due to air pollution. Jean Nelson, Glasgow resident

“Cars are choking the city,” she said. “A lot of people are dying unnecessarily due to air pollution. Europe has told Scotland to clean up this problem, but nothing has been done.”

Nelson lives off Great Western Road in Glasgow. “I live at a junction where the traffic is nose-to-tail almost every minute of the day, and I feel like I’m choking on fumes on a daily basis,” she said.

“Air pollution makes it hard for me to breathe and on bad days, I can barely walk.  I do not own a car and often have to take the bus from Hope Street. I can see black smoke coming out of the buses.”

She accused Glasgow City Council of failing to listen. “It should consider banning traffic from the city centre, and should crack down on vehicle idling in the city,” she argued.

“We need less traffic on our roads if air pollution is going to improve. There are thousands more cars on the roads every year and the problem is only getting worse.” 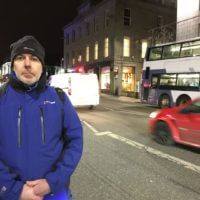 Gregor McAbery (44) from Aberdeen is chair of Ruthrieston Residents’ Association and an activist with Friends of the Earth Scotland. He has asthma and is worried about the dangers of air pollution.

“Clearly there is still work to be done to clean up Aberdeen’s air,” he said. “Like other towns, cities and major arteries across the land the air we breathe poses a health risk, especially for people with respiratory illness like myself.”

He urged more effort to improve walking, cycling and public transport routes. “We need to move towards low carbon transport fuels like hydrogen or electricity for heavy vehicles and cars alike,” he said.

The large number of short car journeys with one person per car is simply unsustainable. There can be no doubt that a nationwide phase out of diesel would be very helpful for reducing nitrogen dioxide and particulate pollution.”

Photo thanks to Friends of the Earth Scotland via CC by 2.0.