Scottish charities who denied using a government scheme whereby people were forced to work unpaid did take part in the controversial “workfare” programme, the Ferret can reveal.

Earlier this week we published a list of more than 500 UK organisations who took part in the Mandatory Work Activity (MWA) scheme including a number of Scottish charities.

One of those named, Govanhill Baths Community Trust, denied it had participated in the scheme.

However, a letter sent from a MWA provider to a benefits claimant on 19 June 2012 said they must take up a position at Govanhill Baths Community Trust.

“The purpose of this placement activity is to provide experience, reinforce the discipline of employment and to enable you to make a community contribution,” the letter says.

The venue for the mandatory work placement is listed as Govanhill Baths Community Trust, 465 Victoria Road, Glasgow, the former site of a charity shop linked to the Trust. 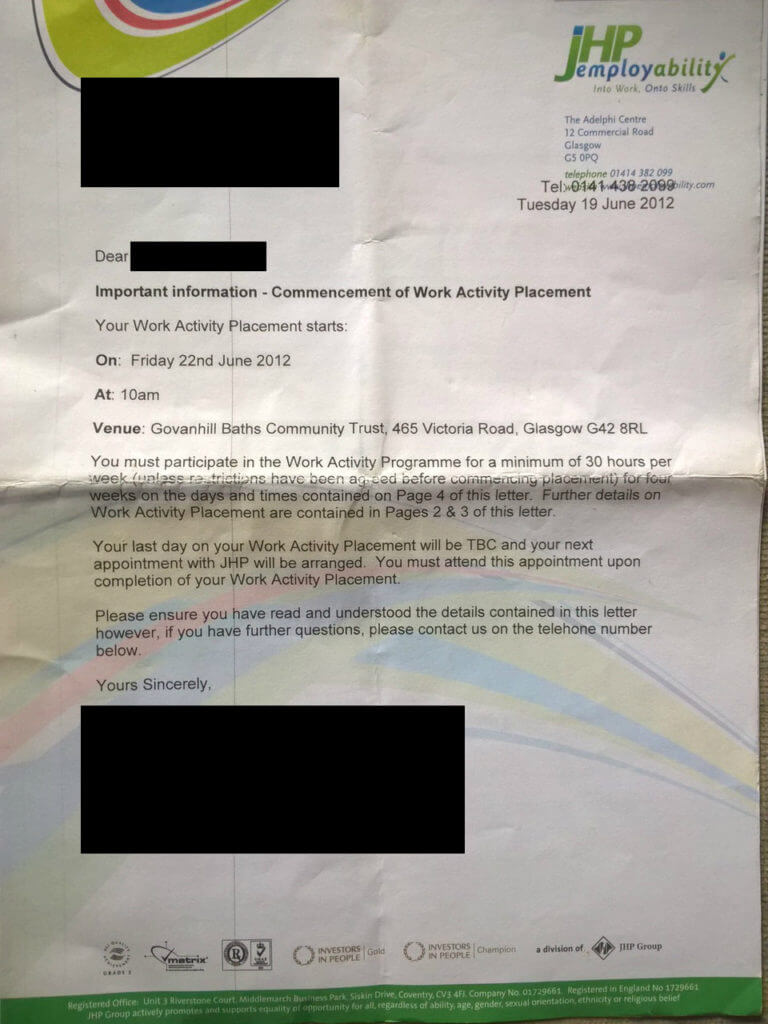 The letter was sent to Robert Shimmons, 34, who worked for over a month at the Govanhill Baths Community Trust charity shop in Glasgow’s southside.

He said: “Basically it was 40 hours a week for four weeks at the charity shop just doing what the volunteers were doing, manning the till, managing stock, but on pain of having my benefit cut if I didn’t.”

A MWA timesheet for Shimmons lists the “place provider” for his placement as GBCT (Govanhill Baths Community Trust).

Mr Shimmons was recruited to the post by JHP Employability, which later merged into Learndirect, one of the largest providers hired by the Department of Work and Pensions. 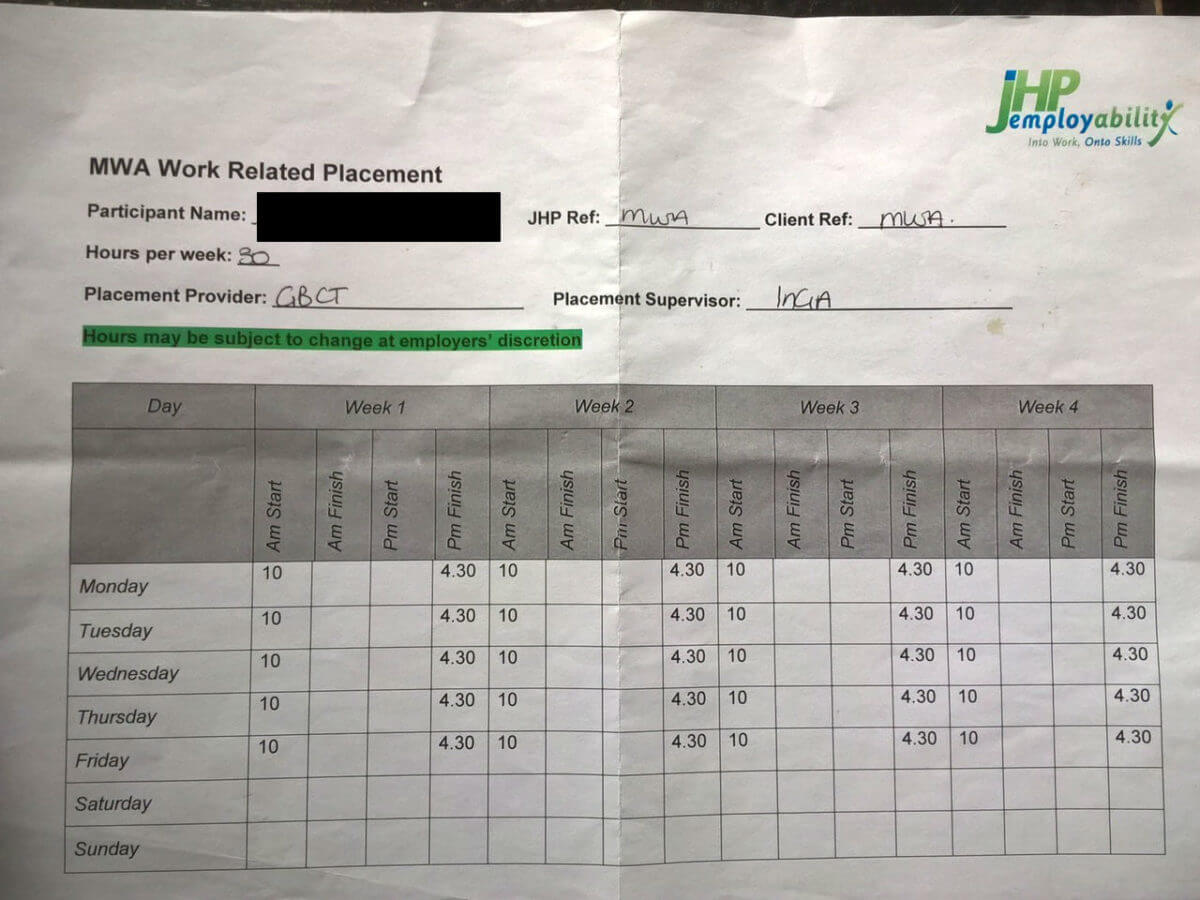 “I don’t know who it was who arranged me, whether it was Govanhill Baths or someone else,” said Shimmons. “I get the impression that the companies approached the charities rather than the other way round.”

“It could be that (Govanhills Baths Community Trust) genuinely didn’t know or it could be that they didn’t ask questions,” says Shimmons. “You would expect that at least you would check the details of the scheme that you are involved with.”

When the list was first published on Monday, Govanhill Baths Community Trust released a statement saying it had “never to our knowledge engaged in workfare programmes”.

“We have been named despite always refusing to take part in workfare! This is a serious mistake by DWP,” a spokesperson for Govanhill Baths Community Trust added.

The organisation declined to provide further comment, despite new evidence that the charity did indeed benefit from the MWA programme.

Shimmons also challenged another charity who denied being involved with the controversial scheme after the list was published.

Earlier this year he was called to a meeting with Learndirect to discuss a Community Work Placement, a counterpart to MWA that involved placements of up to six months.

Shimmons claims that during this meeting he saw that one of the venues listed for the scheme was Mary’s Meals, a world famous charity named on the list released by the DWP under Freedom of Information legislation.

“I’m as certain as I can be that Mary’s Meals was listed,” said Shimmons.

In response, a spokesperson for Mary’s Meals said: “We bring in volunteers from different sources. We are inviting people freely to become part of our movement. We would never choose to be part of a workfare scheme voluntarily.”

“It was a huge surprise that our name was on the list. We have been in touch with DWP and we are seeking clarification.”

Robert Shimmons, who suffers from depression and anxiety, said he is not receiving benefits at the moment because he is “exhausted” after his experience with the system.

After finishing a mandatory work placement at Govanhill Bath Community Trust shop in July 2012, he continued as a volunteer for “a few weeks” because, he said, “they seemed like decent folk.”

In total, 534 organisations across the UK were named on the MWA list including high street names such as Tesco, Nando’s, Boots, Superdrug, Morrisons, Asda, Co-op, WH Smith, Poundstretcher, Cash Converter, DHL and a host of other major corporations.

Among Scottish organisations that used the scheme for a six-month period between July 2011 and January 2012, were South Ayrshire Council, Glasgow Furniture Initiative, Dogs Trust Scotland and Capability Scotland.

Their names were revealed after the Court of Appeal ruled against the Department for Work and Pension’s attempt to keep them secret.

After holding out for four years, the DWP was overruled by three judges at the Court of Appeal by a vote of two to one.

Under MWA job seekers were forced to work unpaid for 30 hours per week or lose their £73-a-week benefit payment.

The scheme was criticised by the Work and Pensions Select Committee when it was introduced in 2011 and was scrapped by the UK Government along with the CWP in 2015. Both schemes ended that April although a related scheme, the Work Programme, continues.

A DWP spokesman was unable to confirm or deny the details of Shimmons account. In a statement he said: “Employment programmes help thousands of people every year gain new skills and experience to get into work.”

In 2015, Learndirect recorded profits of £1.6m on turnover of more than £177m, according to accounts filed at Companies House.

Learndirect has previously been accused of charging “hard to justify” management fees on contracts for government apprenticeships that it subcontracts.

The company declined to comment despite repeated approaches by The Ferret.