UK civil servants have been accused of using taxpayer cash to manipulate potential voters on Facebook, which one critic said would be an “abuse of power”.

The Ferret obtained details of the paid marketing activities on Facebook undertaken by the Scotland Office. It shows how Facebook messages from the department were targeted at specific groups of people in Scotland.

Other campaigns frequently targeted armed forces personnel in Scotland while one excluded those interested of Scottish independence, prompting questions over the use of taxpayers’ money by civil servants.

The UK Government strongly denied all accusations that its Facebook advertising had been party political, calling critic’s claims “completely untrue”.

Deidre Brock, an SNP MP and frequent critic of the Scotland Office, called for civil servants to be “open and honest” about their social media use. 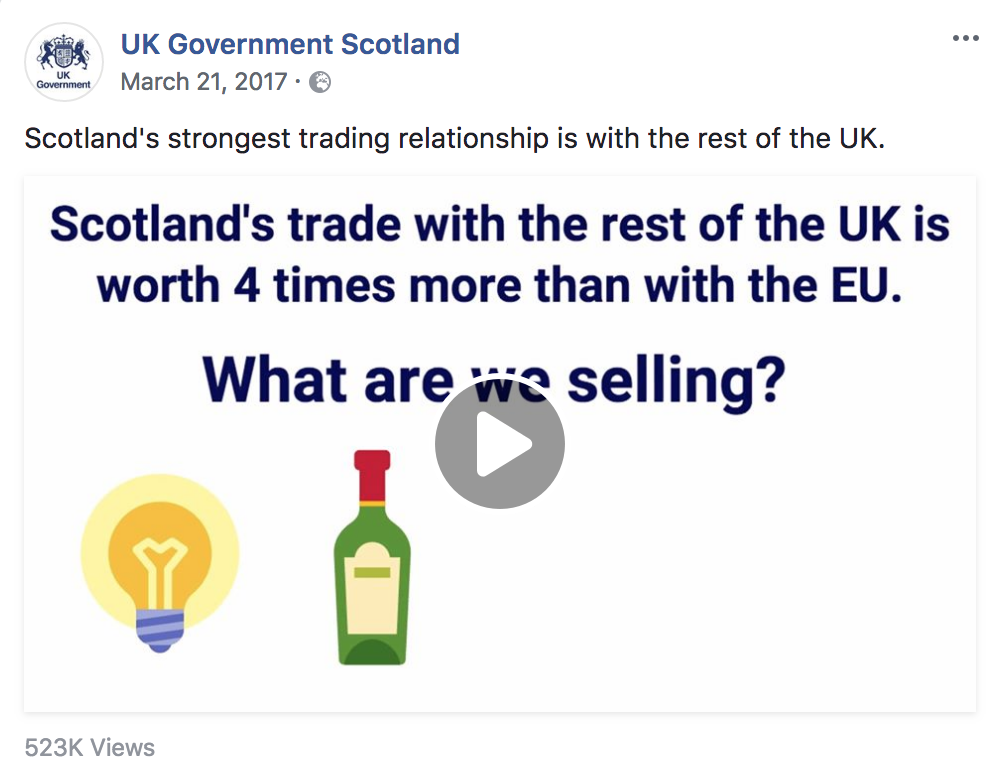 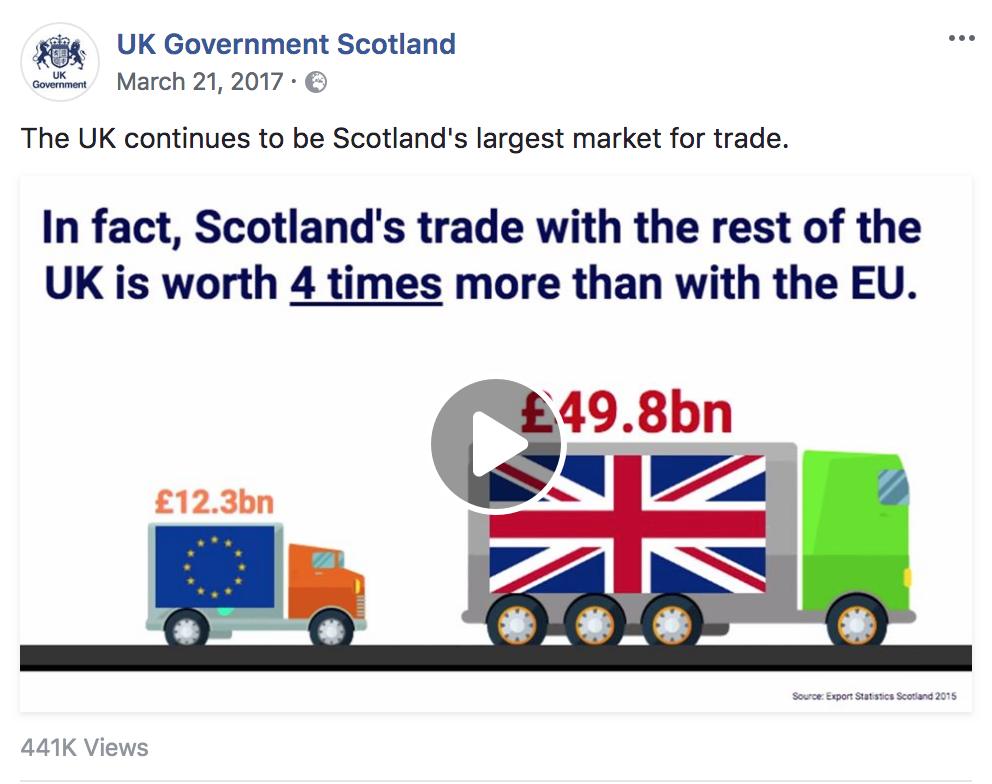 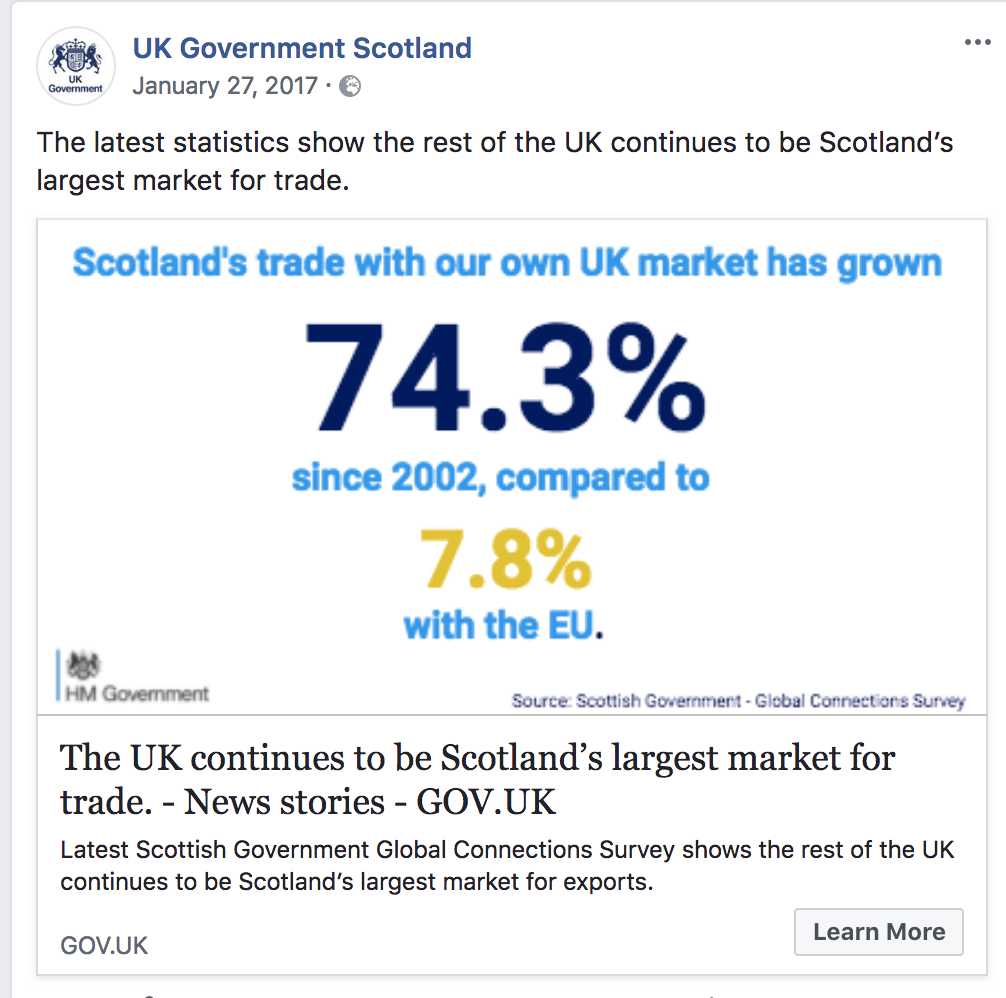 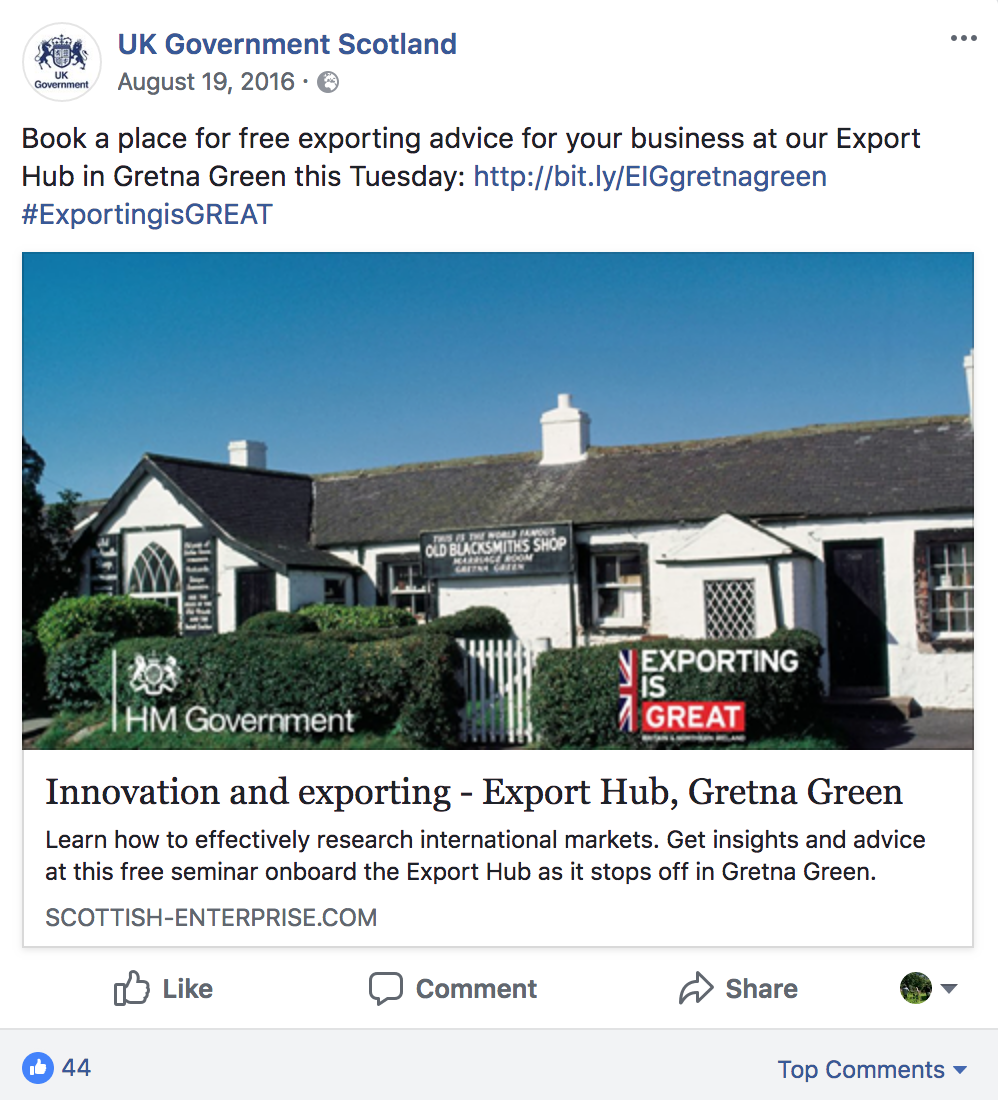 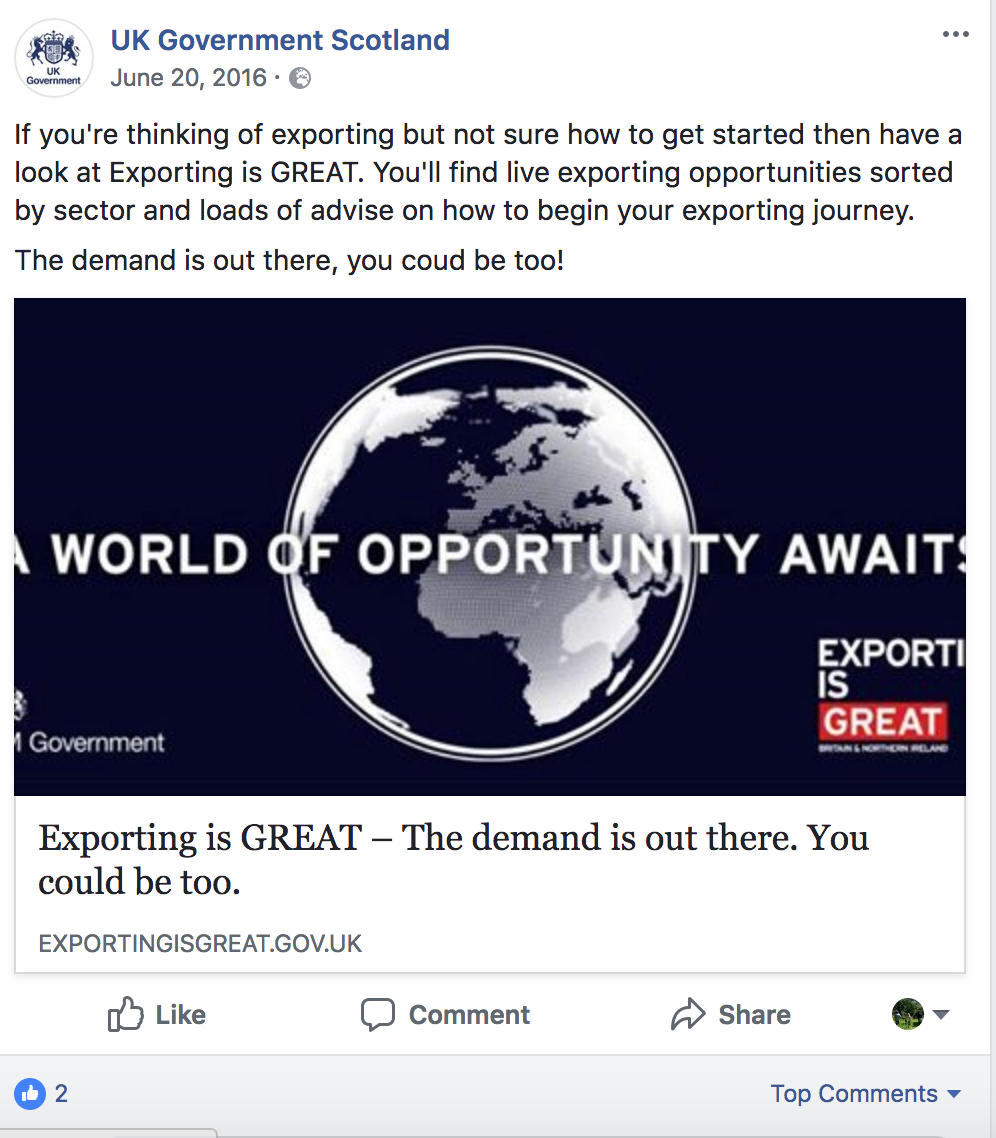 One campaign called “Exporting is GREAT” targeted small businesses within a thirty mile radius of Gretna, which lies within David Mundell’s constituency of Dumfriesshire, Clydesdale and Tweeddale – the only Tory-held Westminster seat in Scotland prior to the June 2017 general election.

A UK Government spokesman said the ad spend coincided with a visit by the UK Government’s Exporting Is GREAT campaign bus to Gretna.

But although the Scotland Office published Facebook posts announcing that the bus would be visiting several other locations throughout Scotland in August and September 2016, it was apparently only the Gretna post that received a financial boost.

Another trade campaign sought to emphasise that Scottish trade with the nations in the rest of the United Kingdom was worth more than the amount it exported to Europe.

It also excluded groups of Facebook users . The groups excluded were people older than 35 with a university education, earning more than £30,000, and with an interest in Scottish independence.

The Scottish Conservatives are known to have been pursuing “proper old fashioned blue collar” conservatism. It has been claimed that this tactic has led to them winning more seats on the list in Holyrood.

Campaigns focusing on the 2017 Budget, St Andrew’s Day and Burn’s Night, all targeted armed forces personnel while a devolution campaign targeted only women.

Unlock Democracy, a group which campaigns for democratic reform, warned against the use of taxpayer money in ‘micro-targeted’ political advertising.

“If the Scotland Office has been using micro-targeting to isolate itself from potential critics, then it is ducking accountability at best,” said Director, Alexandra Runswick.

“At worst, taxpayer money is being used to manipulate potential voters for party political purposes. It would be a misuse of taxpayer money and an abuse of power if the civil service is micro-targeting tailored Facebook adverts to potential Conservative target voters.

“The foundations of democracy are built on transparency and fairness, where people have a shared understanding of values, a collective responsibility for society, and the willingness to build a consensus despite divergent and disparate opinions.

“That shared understanding is undermined when either politicians or the civil service put out one message to one set of voters, and another message entirely to others.”

Runswick called for regulations to be tightened urgently, adding: “Otherwise it’s just a matter of time before another scandal erupts.”

It would be a misuse of taxpayer money and an abuse of power if the civil service is micro-targeting tailored Facebook adverts to potential Conservative target voters. Alexandra Runswick, Director, Unlock Democracy

Griff Ferris, Legal and Policy Officer at Big Brother Watch, a campaign which campaigns for civil liberties and online privacy, highlighted the importance of neutrality in the actions of civil servants.

Recent revelations about the use of people’s data from Facebook for political purposes underline this, he said.

“The Scotland Office has a duty to spend public funds according to the public interest, but excluding certain demographics and targeting those more likely to be sympathetic – based on personal information on Facebook – is arguably not in line with that duty,” he added.

Dr Mark Shephard, a senior lecturer in politics at the University of Strathclyde, Glasgow, said the criteria used to target the Scotland’s Office trade campaign suggested that it was trying to reach users who were more likely to agree with the message.

This strategy could simply be a consequence of social media managers trying to maximise the number of people engaging on the posts, he explained.

It took eight months for the Scotland Office to release information on their targeting strategy, and the process required the intervention of the UK’s Information Commissioner.

The Ferret also requested evaluation and strategy documents to shed more light on the Scotland Office’s thinking on how adverts should be targeted, but the Information Commissioner concluded that it would not be in the public interest to force the release of these documents.

The Ferret has done all of Scotland a favour in getting some information out of the Scotland Office and we should be grateful for hard-working journalists willing to do the digging on these subjects. Deidre Brock MP

In response, Deidre Brock, the SNP MP for Edinburgh North and Leith, pledged to pursue the matter further at Westminster.

She has previously criticised Scotland Office spending and called on David Mundell to reveal why specific groups were micro-targeted.

“The Ferret has done all of Scotland a favour in getting some information out of the Scotland Office and we should be grateful for hard-working journalists willing to do the digging on these subjects.

“We also know that the Scotland Office avoided speaking to voters with an interest in Scottish Independence and that its spending was very high in the month just before the snap general election was called.

“The Scotland Office should be open and honest about how they chose their targets, why they chose those targets and what they actually said to them.”

“There’s a lot of real concern around about the activities of Cambridge Analytica and other firms like it and how much they interfere with our democracy, our elections and who has access to Ministers – the least we should expect from David Mundell and the rest of the UK Government is that they try to be honest about what they’re up to.”

Responding to the above crticisms, a UK Government spokesman said: “These claims are completely untrue. Our promoted social media content is always also available on our digital channels so as many people as possible can see it.

“As is established best practice we also select certain audiences – for instance, parents about childcare costs – to help ensure that the right people know about the UK Government support available for them.

“This is done for clear, specific reasons and never involves targeting anyone for party political purposes. Staff adhere to propriety, social media and spending guidelines at all times and ensure value for taxpayers’ money.”

Update: This article, originally published at 18:45 on 27 March 2018, was updated at 19:14pm to correct a claim that a Scotland Office Facebook campaign excluded supporters of Scottish independence. This was corrected to state that Facebook users interested in Scottish Independence were excluded.