The director of a Highland firm selling game is a neo-Nazi who promoted the views of a Holocaust denier, The Ferret can reveal.

Paul Illingworth is a director of Lochaber Game Services , a company based in Fort William that sells meat, poultry and fish and describes itself as a “small independent family Butcher.”

But Illingworth has a secret life and is listed as a member of a neo-Nazi organisation called Blood and Honour.

He appears on a list of alleged Blood and Honour members across the UK obtained by The Ferret during an investigation in conjunction with the Daily Record.

He also posted a picture of himself with former Rangers player John Brown. 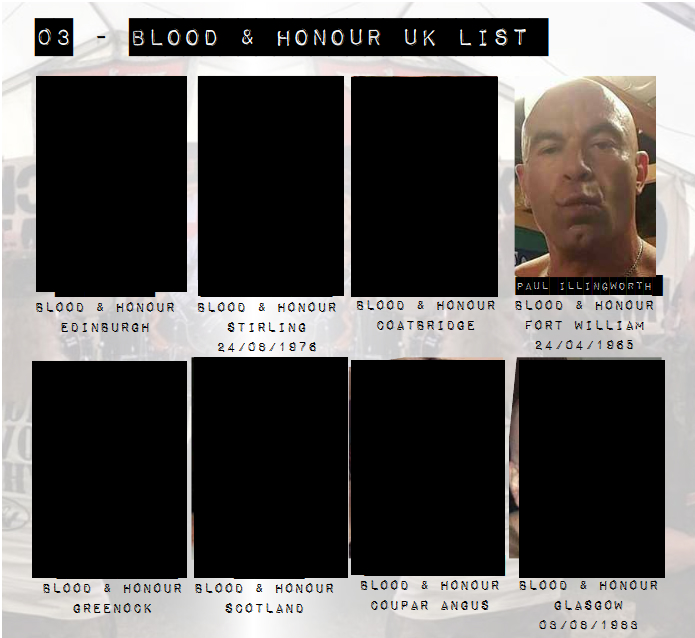 There is no suggestion whatsoever that either of the above knew anything of Illingworth’s secret life.

Earlier this year Illingworth boasted on social media of shouting ‘Sieg Heil’ while on holiday in Berlin.

In January he put a photograph on Facebook of himself in front of the Brandenberg Gate.

Comments from friends underneath included one that said: “No goose stepping”.

Another friend wrote: “Just tell them it’s a red hand salute, I’m sure many will be thrown on Sunday when rangers visit Leipzig lol.”

He said he should keep tattoos covered and that he wanted to “salute” at the Brandenberg Gate but there were “too many people and Police about.”

He added: “it’s great to be in the Fatherland.”

"Blood and Honour are the street fighting thugs of the Nazi movement in Britain. There is little difference between Blood and Honour and banned terrorist organisations. Their aim is to use violence to terrorise opposition to Nazi Street protests and fascist fundraising gigs." Unite Against Fascism

Williamson sparked international outrage in 2009 for denying the Holocaust.

He denied the existence of Nazi gas chambers in a TV interview with a Swedish documentary program.

He also questioned the consensus among historians that six millions Jews were killed during the Holocaust.

Williamson said in the interview: “I believe that the historical evidence is strongly against…hugely against…six million Jews having been deliberately gassed in gas chambers, as a deliberate policy of Adolf Hitler….I believe there were no gas chambers.”

After sharing the Youtube footage Illingworth said: “I’ve read a few of his books and admire him greatly…True Historian.”

We obtained photos of Illingworth with other skinheads wearing Blood and Honour t-shirts.

He is a fan of the infamous neo-Nazi band Skrewdriver who inspired Blood and Honour.

Blood and Honour is an international movement that organises secretive music gigs in the UK and abroad.

It emerged from the skinhead movement in the 1980s and led the ‘Rock Against Communism movement’.

Blood and Honour was a 1985 song by Skrewdriver whose lead singer Ian Stuart Donaldson helped found the organisation.

Blood and Honour is banned in Germany, Russia and Spain but active in at least 20 other nations including Australia, Canada New Zealand and Chile.

"But like all racists, they can pose a threat to members of the community- especially when drunk or wound up. So it would help if the police enacted and reacted appropriately when they try and sneak their gigs etc into mainstream society." Matthew Collins of Hope Not Hate.

Every March the Highlander Division holds a Kriss Donald Memorial in memory of the Scottish teenager who was murdered in 2004.

Its website says: “Blood and Honour has evolved into a tight organisation, active groups of thirty plus becoming Divisions, smaller groups being given sectional status, all politically active and aligned to the party or movement of their choice, neither Divisional or Section status is awarded lightly, it has to be earnt (sic) not bought.

“A High Command made up of band members, activists and political parties dictate the direction Blood and Honour takes. National gig organiser, Security, Propaganda and Internet units cover every aspect of the day to day running of our movement.”

“With the success of Blood and Honour within Great Britain, and the massive amount of support globally, international divisions of Blood and Honour began, from the first in Australia and other white Commonwealth countries, the movement has grown to cover countries in all four corners of the globe, all working under their own respective countries laws in what way they see fit, to further our mutual aims.

In the photo with Graeme Souness, Illingworth is wearing a blue Thor Steinar t-shirt.

Thor Steinar goods were banned in Germany 2004 because of the logo’s similarity to symbols worn by SS officers.

But the company has rebranded and its new look is popular with the extreme far right.

In March 2012 the company sparked global controversy when it opened a shop called Brevik in Saxony.

It was accused of naming the store after far-right mass murderer Anders Behring Breivik.

Thor Steinar shops in Germany have been repeatedly targeted by anti-fascist protests and vandalised.

Unite Against Fascism said: “Blood and Honour are the street fighting thugs of the Nazi movement in Britain. There is little difference between Blood and Honour and banned terrorist organisations.

“Their aim is to use violence to terrorise opposition to Nazi Street protests and fascist fundraising gigs.

“In the current dangerous political climate where Muslims and immigrants areas being scapegoating we can’t afford give them an inch.”

Matthew Collins of anti-fascist group Hope Not Hate, said: “Their time has passed. But like all racists, they can pose a threat to members of the community- especially when drunk or wound up.

“So it would help if the police enacted and reacted appropriately when they try and sneak their gigs etc into mainstream society.

“And also, if the tax man chased them for their lucrative and untaxed earnings.”

Neither Illingworth or Lochaber Games Services Ltd responded to repeated requests for a statement.

This story is published today in conjunction with the Daily Record.