As 2018 began, the SNP decided to highlight on some of its achievements in government over the previous year and beyond.

The party posted a series of graphics on Facebook showing statistical and political improvements it had made.

One of these was regarding policing in Scotland, with the image claiming that recorded crime had dropped to record low levels, and policing numbers had gone up. 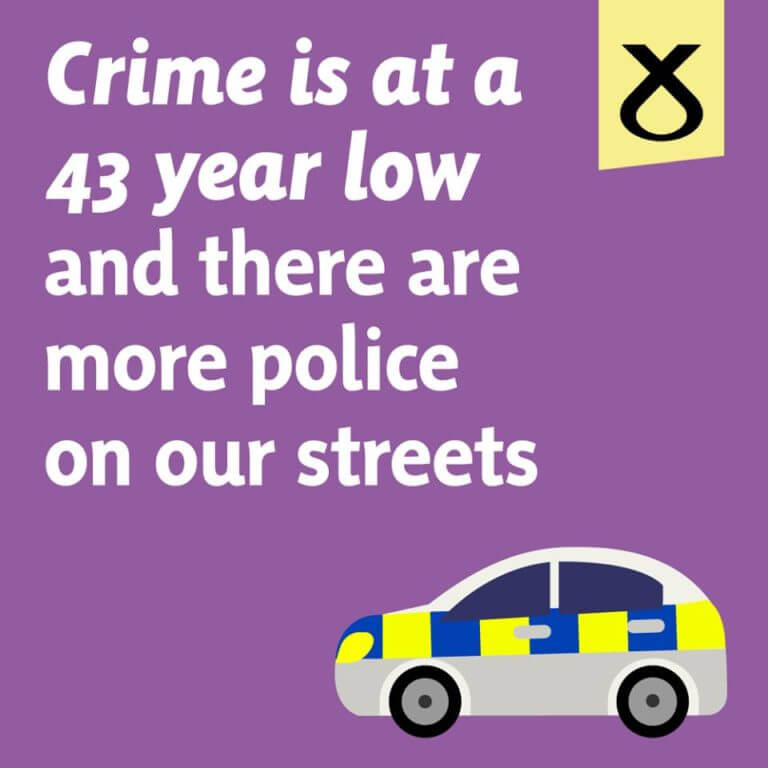 We looked at this claim and found it to be Mostly True.

The statement has two claims within it and the first one appears to be accurate.

Recorded crime statistics are released annually by the Scottish Government, with the latest figures for 2016/17 showing a decrease to 238,651 crimes logged by police in Scotland.

There has been a general downward trend in recorded crime since it peaked at 572,921 in 1991 and numbers have decreased each consecutive year since 2006/7.

The second part of the SNP’s claim refers to police numbers in Scotland. These are released every quarter. It is unclear exactly which timescale the party is using to justify the claim of an increase in police but it is likely the party is referring to their 2007 manifesto pledge to increase numbers by 1000.

There were 17,250 full-time equivalent police officers in Scotland’s force, according to the latest figures in November 2017. This is an increase of just over 1,000 since the SNP got into power in 2007.

But these trends have not continued. After a significant increase in police numbers between 2008 and 2009, numbers have stayed broadly static, with a slight downward trend since a peak of 17,496 in 2013.

After a review of Scottish policing in 2017, the Scottish Police Authority announced that officer numbers are to be cut by around 400 between now and 2026 after the recommendations of the authority’s ten-year policing plan.

The Chief Constable then, Andrew Flanagan, told a press conference at the launch of the new strategy: “We are anticipating a small reduction in police officer numbers through to 2020.

“It would be around 400, but that would come towards the end of the period, rather than early on.”

The claim by the SNP refers to “more police on our streets”, which implies officers on patrol, rather than in administrative or backroom roles.

In a Scottish Police Authority report in August 2017, officers expressed concerns there was a perception that local resources for “routine response and community engagement activities are increasingly stretched over larger geographical areas.”

The research also found officers reporting they were required to spend more time on non-frontline policing due to cuts in support staff, including “dealing with public inquiries at the front desk in police stations, typing up notes, and running checks on Databases”.

An investigation by The Ferret in 2016 found that front-line policing had reduced by almost half in some areas, according to the Scottish Police Federation (SPF)

The SPF revealed that Operational Base Levels (minimum staffing levels for safe policing) in August 2016 in the east of Scotland stood at – 38 officers per shift in Edinburgh, 34 in Fife, 30 in Forth Valley and 47 for Lothian and Scottish Borders – which amounts to a minimum of 149 officers to cover one third of Scotland’s population.

The Scottish Government does not publish figures on frontline numbers, and Police Scotland says that all police officers have potential frontline duties.

In response to a June 2017 freedom of information request on frontline numbers, Police Scotland said: “the number of Police Officers classed as a divisional and local specialist asset is 74.4 percent of the total Police Scotland workforce”.

These are officers which work at the core of the community policing operation.

The first half of the SNP’s claim is accurate. There has been a general reduction in recorded crime since the 1990s and it has now reached its lowest level since 1974. The evidence relating the police numbers “on our streets” is more complex. While the SNP have stuck to a manifesto promise to increase police officer numbers by 1,000, there has been a slight reduction since 2013. There is also no solid evidence that there are more police on frontline duty as the data is not published.

In response to an FFS evidence request, the SNP provided data on recorded crime and top-level police numbers.

Photo thanks to Postdlf, CC BY-SA 2.0