Calls have been made for an investigation into claims Government officials acted ‘inappropriately’ by contacting council planners at the request of a developer.

The development at the centre of the controversy is in Aberdeenshire and promoted by Ken Ross, through his firm Ross Developments and Renewables Ltd. He acts as agent for landowner and former Grampian Foods Chairman, Alfred Duncan.

Over a number of years the pair have worked together to have farmland near Banchory zoned for housing, with the aim of building hundreds of homes there, mainly for private rent.

Although the local council has resisted attempts to have the Braehead site designated for housing in the local development plan this has not deterred Ross and Duncan from submitting a series of planning applications.

Each application has been met with hundreds of objections from locals who say they are feeling increasingly ‘worn down’ by repeated attempts to develop the site over the last three years.

With 634 objections, the most recent application even set a record for the highest number of objections received for one planning application in Aberdeenshire. 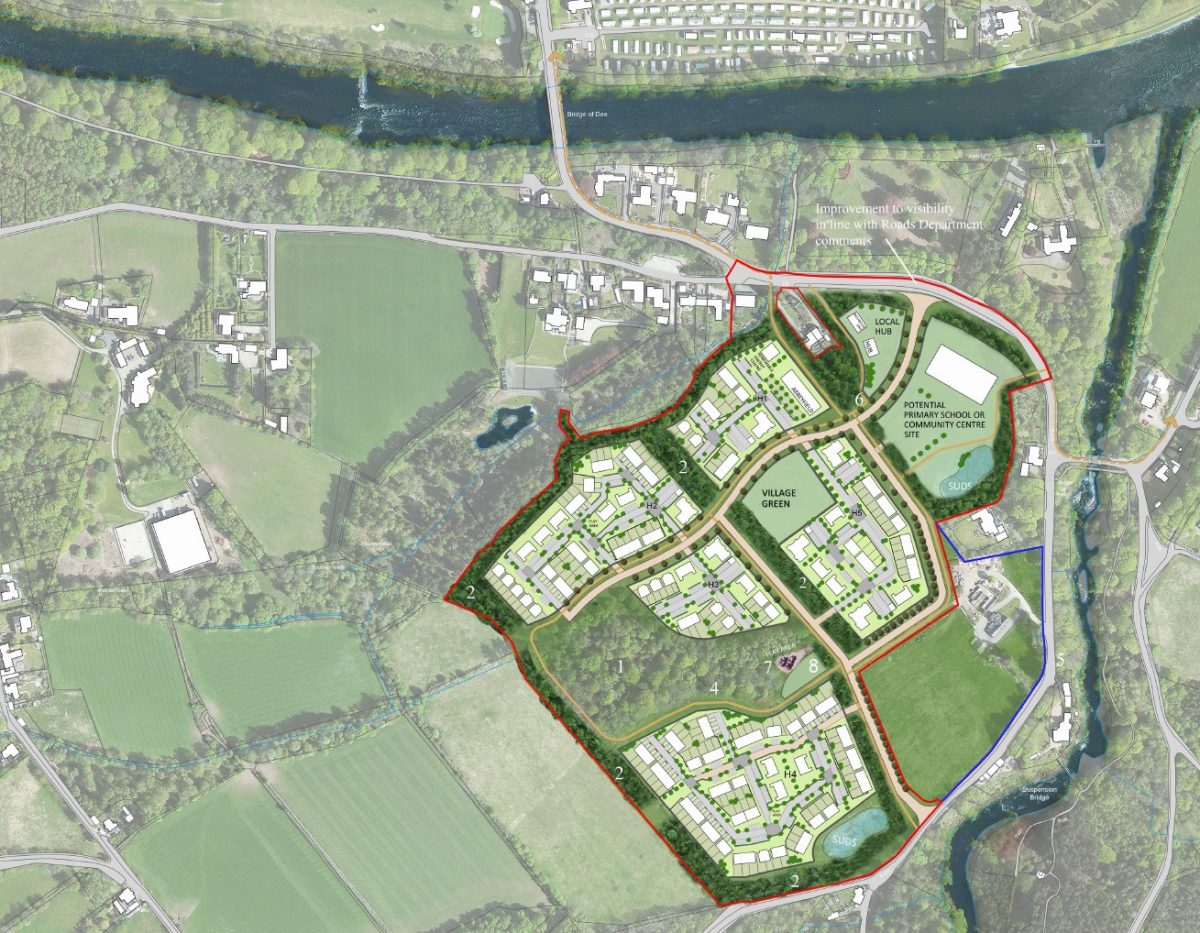 Now, campaigners opposing the plans have uncovered evidence showing that Ross Developments staff contacted senior Scottish Government planners to ask them to mediate on issues where the firm disputed the assessment of local planners.

A Freedom of Information (FOI) request shows that prior to a planning hearing at Aberdeenshire Council, Ross Developments contacted the Scottish Government on two occasions in March 2016.

Following these contacts both the Scottish Government’s Principal Planner and the Assistant Principal Planner, who are not named in the FOI response, made phone calls to the Head of Planning at Aberdeenshire Council, Richard Gray, in April to discuss the project.

The Scottish Government planners offered to ‘mediate’ between the council and the developer, but council officials turned down the offer. Although Aberdeenshire councillors ultimately rejected the latest application to build on the site, the developers appealed the decision.

Locals now fear that the housing plan may yet get the green light, despite the weight of local opposition.

Campaigner Mike Adams told The Ferret: “At the very start of this process in 2013 the developer made clear that irrespective of the unsuitability of the site and the fact the community, planning department and council were strongly against the plans…they would have it approved on appeal in Edinburgh.”

Ross denies that he suggested that an appeal would be approved as a foregone conclusion.

“The FOI appears to show the Scottish Government intervening at the request of a frustrated developer,” explains Adams.

“It is very concerning that the approach and subsequent assistance provided gives the public the perception that it is possible to expedite the approval of a planning application in which a government advisor would directly benefit.”

Mr Ross is the sole director of Ross Development and Renewables, the firm promoting the housing scheme. He is also on the board of the Scottish Property Federation (SPF) and represents it on the Scottish Government’s Joint Housing Policy and Delivery Group, where he meets regularly with government ministers and civil servants to discuss national housing policy.

Adams is supported by Alexander Burnett, the Scottish Conservative MSP for Aberdeenshire West. “This appears to be evidence of a developer lobbying senior government officials to intervene in a non-strategic planning application before it was considered by the local council,” Burnett said.

“If that is indeed the case, then this could only be viewed as an attempt to undermine or interfere in the local planning process. We need assurances from Ministers that this will be investigated thoroughly, particularly in light of the recently-lodged appeal against the local decision to refuse the application.”

Burnett has also called on the government to “consider publishing a register of cases in which ministers make contact, offer assistance or intervene in planning applications” among a series of written questions he has lodged at Holyrood.

“Planning Democracy would express considerable concern about any case that has any hint that the Scottish Government is using its influence to advance the interests of a well-connected developer, particularly if that development runs counter to democratically agreed plans and policies.”

The Scottish Government is currently considering reforming the planning system, including proposals for “simplified planning zones for housing.”

But Planning Democracy has argued that planning policy in Scotland is dominated by “the interests of a powerful group of development lobbies that it was designed to regulate.”

Symonds added: “Cases like this damage the already failing public trust in the system and undermine the efforts of locally elected representatives. The Scottish Government need to take seriously community views and the long term public interest when considering upcoming planning reforms.”

When contacted by The Ferret, Ross dismissed the criticism levelled at him and defended his relationship with Scottish Government officials.

Ross said: “These claims are a spurious invention by a group of NIMBYs attempting to cast suspicion on an independent appeal process, which will only be influenced by facts.

“We did ask the Scottish Government to mediate on an important infrastructure matter where we disagreed with council officials. While the officials were willing to participate in such mediation, unusually, the local planning convenor said no.

“The request for mediation relating to an infrastructure issue was perfectly legitimate and transparent. It was therefore, entirely appropriate and permissible within the planning process. The refusal highlighted political opposition to our proposals.

“An appeal is a formal part of the planning process and it is a developer’s right to appeal, just as it is an objector’s right to object. An appeal was always a possibility and I have expressed that openly, but I have never suggested that such an appeal would be approved as a foregone conclusion.”

Ross added: “I am one a number of private sector representatives on the Scottish Government’s Joint Housing Policy and Delivery Group, which properly requires opinions from both public and private sector in examining policies.

“I am on the group to represent the wide interests of the Scottish Property Federation and not in my own right and there is a standard procedure for recording any vested interest, should there be one.

“If a local MSP considers as evidence what he has been told by NIMBYs that is a poor reflection on his judgement.”

A Scottish Government spokesperson said officials had been “respectful” of local planning processes.

“Ministers and relevant Scottish Government officials work within strict codes of conduct and are respectful of local authority rules.

“In the Banchory case, no brokerage discussions took place, no comment was offered by Scottish Government officials on the proposed development – with a comprehensive response to a related FOI request issued confirming that.

“The Scottish Government is committed to seeing the right developments in the right places. Following recommendations from the independent planning review we have put forward 10 immediate actions and will work with local authorities, developers and community groups to develop more detailed proposals for reform.”

In an emailed statement the Head of Planning at Aberdeenshire council, Robert Gray, confirmed that there were no other approaches to the council other than those detailed in the Freedom of Information request, although he said that mediation was offered.

He said: “Scottish Government planners contacted the head of planning who took the matter to a full council agenda meeting where it was discussed with the Provost with a recommendation that mediation was not necessary. The Provost agreed.

“No mention was made of mediation at the pre-determination hearing. A question was asked by a member of the full council meeting of the applicant’s agent. The minute of full council refers to this. Scottish Government planners did not attempt to influence the determination of this application.”

He added: “The council strongly disagrees with Ken Ross’s assertion that not enough land has been allocated for housing, rented or otherwise, in the local development plan.”