Private finance firms profiting from Scottish hospitals have drawn criticism for seeking positive publicity for their response to the coronavirus pandemic in Europe whilst refusing to drop charges in Scotland.

As a result, taxpayers are set to pay out nearly £1 million to companies managing car parks at Edinburgh Royal Infirmary, Glasgow Royal Infirmary and Dundee’s Ninewells Hospital. The payment means that vital NHS staff and visitors to hospitals will not have to pay to park for the next three months.

The price tag to cancel the parking fees drew criticism from trade unions, local politicians and academics, with many calling on the companies involved to drop or waive fees, while the NHS struggles to cope with the emergency.

A petition calling on private finance firms to return the £955,000 taxpayer cash from the Scottish Government has gathered thousands of signatures in a matter of days.

Now The Ferret has found that 3i Group, one of the ultimate controlling firms to profit from the Edinburgh Royal Infirmary fees, has been lauding the coronavirus response of another of its “portfolio companies” on social media, earning hundreds of positive responses in the process.

In a series of posts on the 3i Group LinkedIn page, where more than 15,500 people follow the firm, a spokesperson said “We’re proud to see our portfolio company Action is donating more than three million medical gloves to the Red Cross, which will be distributed to the care institutions across the Netherlands.” 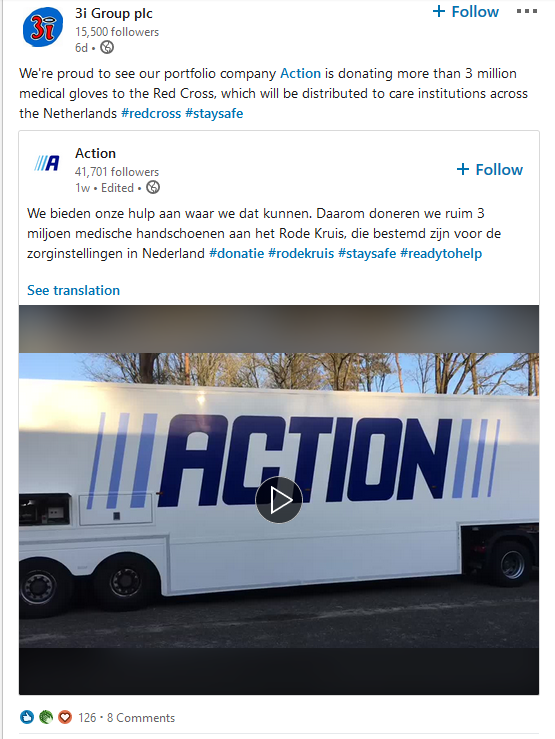 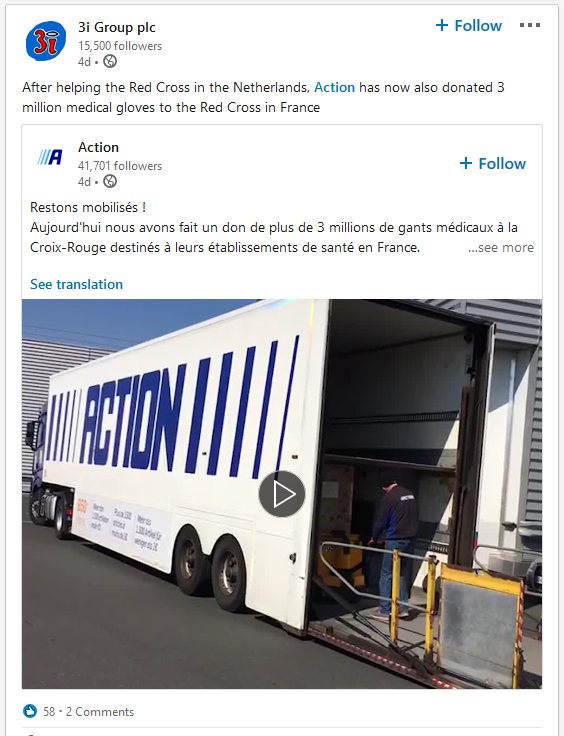 3i Group has also sought to reassure its shareholders that it is in robust financial health as the Covid-19 crisis impacts on many areas of the economy. In a statement the firm said: “At 31 March 2020, we expect our cash balance to be c.£800 million.”

Meanwhile, The Ferret has received reports from hospital and other essential workers, and those concerned about their working conditions from around, Scotland saying that many are currently struggling to access sufficient protective equipment to keep themselves safe.

Scottish Greens co-leader and finance spokesperson, Patrick Harvie MSP, said: “This is a time when our front line NHS workers are being recognised and appreciated more than ever. Indeed, most people are looking for ways to help them.

“Instead of maximising their profit at the expense of these workers, the firms that run our PFI hospitals should be playing their part in the growing solidarity by waiving the outrageous charges they place on our NHS.

“At a time when we must all play a part in keeping each other safe, it is unacceptable for companies like this to be looking for new ways to skim profits from our hospitals.”

Dexter Whitfield, director of European Services Strategy Unit and an expert on private finance schemes, told The Ferret that MSPs should use the Covid-19 crisis as an opportunity to review the contracts with a view to cancelling them, or clawing back cash for the taxpayer.

“It speaks volumes that it is the Scottish Government and taxpayers that have to fund the reduction in hospital car parking charges. The car parks are clearly such a significant cash cow that the the PFI companies are unwilling to even concede a reduction in fees in the middle of a global pandemic,” he said.

Companies were continuing to extract “profits for wealthy offshore shareholders irrespective of the social and economic consequences for the people of Scotland,” Whitfield added. “They believe they have absolutely no responsibility whatsoever to the Scottish NHS or to patients and the public in Scotland.”

3i Group own a 50 per cent controlling stake in the private finance firm, Consort Healthcare, that operates at Edinburgh Royal Infirmary.

A spokesperson for 3i Group said: “Consort has been in dialogue with the NHS recently and received instructions over the weekend regarding the car park. Therefore the barriers to the car park were lifted on Monday and no payment will be required to use the car park. As this demonstrates, we continue to work constructively and cooperatively with the NHS during the crisis.”

Another firm, Tetragon Financial Group, owns the other 50 per cent of shares in the hospital operating company through its Equitix subsidiary and a series of firms in tax secrecy jurisdictions, including the Channel Islands and the Cayman islands. Tetragon declined to comment.

Semperian PPP Investment Partners operates the Glasgow Royal Infirmary car park. It is ultimately managed through a company registered in a tax secrecy jurisdiction in the channel islands.

It has also declined to waive fees it charges to operate the car park, but confirmed it has reached an “arrangement” with the NHS. Chief executive Alan Birch said: “Given the intense pressure that the NHS and its staff are currently experiencing, the last concern they should have is the availability or cost of car parking spaces.

“We have therefore been proactive in seeking a way forward and have offered everything in our power to help by way of additional free spaces. We were pleased to have come to an arrangement with NHS Greater Glasgow last week, whereby the whole car park is available free of charge for staff and visitors for the next three months.”

At Ninewells Hospital in Dundee, the car park is operated by SABA Parking UK but this company is ultimately controlled by a Spanish Banking Foundation called La Caixa. It funds support for vulnerable people, creative projects and research projects, largely in Spain, Portugal and developing world countries. The foundation website say it has allocated three million euros to help alleviate hardship caused by the coronavirus pandemic.

La Caixa did not respond to a request to comment.