The owners of a Highland estate sought to profit from a firm criticised for its environmental impact, leaked documents have revealed.

Information released as part of the Mossack Fonseca ‘Panama Papers’ leak has revealed that the beneficiaries of the Invernesshire-based Lovat Estates Trust, believed to include Simon Fraser, the 16th Lord Lovat, invested in a controversial fracking firm called Kalahari Energy.

The firm worked on Coal Bed Methane extraction in Botswana, with industrial operations known to have been sited close to areas important for nature conservation, such as the Khama Rhino Sanctuary.

Details were published in the Offshore Leaks Database put together by the International Consortium of Investigative Journalists, for exploring leaked information about secretive, offshore financial relationships. 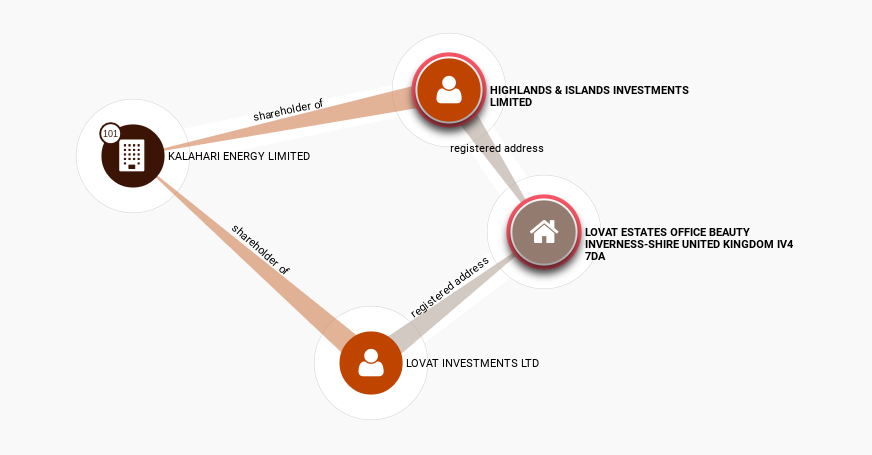 Despite the leak the current status of Kalahari Energy is difficult to determine.

Although the Offshore Leaks Database suggests that the firm is still active, the firm now has no web presence. A director of the Lovat investment companies has confirmed the Kalahari shares are now regarded as worthless.

Kalahari Energy is believed to have “lost its assets” after environmental campaigners released a documentary called The High Cost of Cheap Gas.

The film exposed the environmental impact of  gas exploration firms in Africa and forced the government in Botswana to acknowledge that firms like Kalahari Energy were working in the country.

Jeffrey Barbee of Alliance Earth, who Directed The High Cost of Cheap Gas explained that one of the key criticisms levelled at Kalahari Energy was its use of large amounts of water in “one of the most water scarce environments on earth.”

He also claimed that drilling firms like Kalahari Energy were able to operate outside normal environmental rules. He said that they were not required by the Government in Botswana to file Environmental Management Plans or follow other basic environmental protection rules.

He said: “In 2013 we visited Kalahari Energy’s drilling site near Mmashoro in central Botswana as part of the research for our film The High Cost of Cheap Gas.

“At the time they were pumping out water from coal bed methane seams they had hydraulically fracked to test for thermogenic methane gas and told us that they had good gas returns, both at that site and in the south.

“Once we released the film at the end of 2013, outlining how drilling companies had not been required to file Environmental Management Plans before drilling or follow other basic environmental protocols in Botswana, the government denied anyone had been hydraulically fracking in the country.

“We showed them Kalahari Energy’s own website where they had images of the ponds and fracking equipment, and also our own images of fracking trucks and chemical mixers on the ground in Mmashoro. Kalahari Energy appears to have lost their investments soon after the release of the film.” 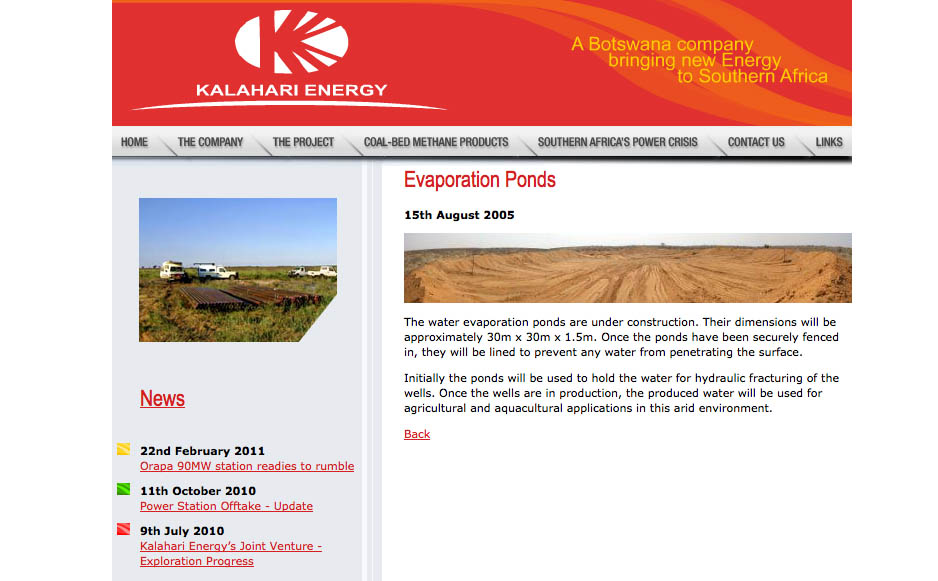 There is some evidence that the assets developed by Kalahari Energy may now be operated by a firm trading as KS Energy.

The former CEO of Kalahari Energy, Steve Martin, is now a Director and the CEO of KS Energy, according to LinkedIn. One local news report described Kalahari Energy as the holding company for KS Energy in 2012.

The Ferret contacted KS Energy to clarify the relationship between Kalahari and KS Energy, but Same Makuko, the General Manager of KS Energy, declined to comment on what had happened to Kalahari Energy or its assets. Instead, he referred enquiries to the government of Botswana.

Officials at the government ministry in Botswana responsible for regulating gas extraction activities were asked to confirm whether the firm was still active and who now controlled its regulated assets in the country. Enquiries were also made about whether Kalahari Energy had ever been fined or subject to any regulatory action in the country. There was no response.

In any case, Barbee said that the potential environmental damage that can be caused by these types of operations should have been of concern to Kalahari Energy investors.

He said: “Botswana is one of the most water scarce countries on earth, and any activity that pollutes and endangers this resource should be reviewed with the utmost care and safety .

“Kalahari Energy and other large scale Coal Bed Methane (CBM) producers in Botswana appear to not have been subject to any environmental overview at all, and this should be cause for grave concern among the communities where they operate and the investors who fund these types of explorations.”

“Any investor who looks at these unsustainable energy systems should be very careful indeed, since it is their capital which allows this sort of pollutive process to unfold in developing countries hungry for energy,” he added.

Closer to home, Dr Richard Dixon, Director of Friends of the Earth Scotland, also criticised the investment made by the Lovat Estates Trust controlled companies.

He said: “Coal bed methane is linked to groundwater contamination and will produce dangerous climate emissions when we need to be keeping fossil fuels in the ground.

“There are inherent and unacceptably high environmental and health risks associated with both coalbed methane and unconventional gas extraction.

“Investors and citizens are becoming much more aware of the impact of companies that they invest in – be it in University endowments in weapons companies, or public pensions investing in fossil fuels.

“No company can seek to invest in exploiting more fossil fuels and claim to be environmentally conscious. ”

John Finnie, Green MSP for the Highlands and Islands, said: “It is disappointing that Lovat Estates, having generated profits from the beautiful Scottish landscape, funnelled that money through tax havens and into fracking projects that destroy precious landscapes in Botswana.

“Not only is investing in dirty fossil fuels unethical, it is becoming increasingly apparent that it is bad business.”

The two Lovat investment firms are both registered to the Lovat Estates Office, in Beauly.

There is a third firm based in the estate office, Lovat Highland Estates Limited. It owns 100% of the shares in both the Lovat investment firms, and it also makes money from local fishing rights and a local property portfolio. All three companies are ultimately controlled by the Lovat Estates Tust.

The two investment firms controlled by the Lovat Estates Trust hold other shareholdings as well. These are not disclosed in the Panama Papers leaks.

October 2014 accounts filed at Companies House show that the Highlands and Islands Investment Trust had an aggregate nominal value of £18.5m whilst the Lovat Investment Trust was reported to be valued at £8m.

Iain Shepherd, Director of Lovat Highland Estates Limited, would not confirm who the beneficial owners of the companies were, although the estate’s website says it is “slowly being rebuilt by the current Lord Lovat”.

On the Kalahari investment Shepherd said: “Our two investment companies owned a very small shareholding in Kalahari Energy as of 2006, but it was written off some years later after it was believed to have lost all value. And no we weren’t aware of the environmental concerns at the time of the investment.”

Details of the Lovat investment in Kalahari Energy were among more than 4800 UK addresses that feature in the latest Panama Papers leak by the ICIJ.

The Ferret made a map of these addresses within hours of the data being released.