Alex Salmond has won his case against the Scottish Government over the way allegations of sexual harassment against him were handled.

The Scottish Government admitted acting unlawfully while investigating claims against the former First Minister. The case has no bearing on a continuing police investigation.

As the verdict was announced, many pro-independence voices online, including protest organisers All Under One Banner, shared a claim about the permanent secretary to the Scottish Government, Leslie Evans, who led the inquiry into Salmond’s alleged behaviour.

The image suggested that Salmond’s case was not against the SNP-led Scottish government, but instead against Evans. The image, which was shared 1,000s of times online by various groups and individuals, argued that she is in fact appointed by and answerable to the UK government. 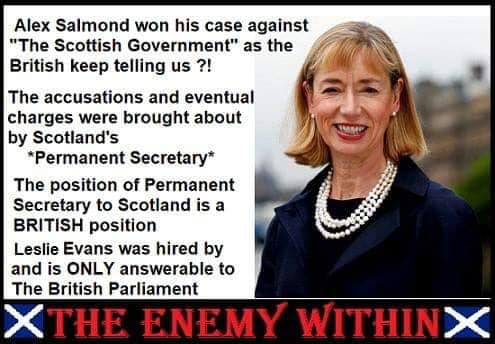 Ferret Fact Service looked at this claim and found it to be False.

The controversy over the Alex Salmond investigation was about the role of the permanent secretary to the Scottish Government, Leslie Evans.

In January 2018, complaints by two female members of staff over the conduct of the former SNP leader were submitted to the Scottish Government.

The incidents were alleged to have taken place in 2013, when Salmond was First Minister. These allegations were investigated internally by the Scottish Government, who then passed details on to Police Scotland.

They were first reported by the Daily Record newspaper in August 2018.

While most media reporting suggested that Salmond was taking legal action against the Scottish Government, the images circulated online argues that it was in fact aimed at Ms Evans.

This is incorrect. Alex Salmond’s action was launched against the Scottish Government, asking for a judicial review of a complaints procedure introduced in January, just weeks before the allegations were first reported.

After a hearing at the Court of Session, the judicial review found that the investigation was unlawful, because the person who had been appointed to lead the probe had previous contact with the complainants. This was agreed by lawyers for Mr Salmond and the Scottish Government.

The shared image goes on to suggest that the permanent secretary role is in fact a Westminster government position, and not answerable to the Scottish Government.

This is a misunderstanding based on the way senior civil servants are appointed. The permanent secretary is the lead civil servant in Scotland. They are appointed by the Civil Service Commission, an independent body in charge of civil service recruitment in the UK (not including Northern Ireland, which has its own set of commissioners).

The appointment process was clarified by the Scottish Government in response to a Freedom of Information request in August 2017. It reads: “A Civil Service Commissioner chairs selection panels for all external recruitment competitions at Permanent Secretary level.

“The First Minister of Scotland makes the final decision, following consultation with the Head of the Civil Service and the First Civil Service Commissioner (Panel Chair in this case).”

Thus the appointment of the Permanent Secretary, and therefore Leslie Evans, is by the First Minister of Scotland, and she is answerable to Scottish Ministers.

The permanent secretary is a position appointed by the First Minister, and is directly answerable to Scottish Ministers. While the selection procedure is done by the Civil Service Commission, this does not mean that Westminster is in charge of appointing the position, or that the UK parliament or government has direct authority over the permanent secretary’s decisions.

Ferret Fact Service (FFS) is a non-partisan fact checker, working to the International Fact-Checking Network fact-checkers’ code of principles. All the sources used in our checks are publicly available and the FFS fact-checking methodology can be viewed here. Want to suggest a fact check? Email us at factcheck@theferret.scot or join our Facebook group.

Photo thanks to XIIIfromTOKYO, CC BY-SA 4.0

Correction: Updated to clarify that Northern Ireland has its own set of civil service commissioners.