Calais: requiem for a dream

In February 2015, photographer Iman Tajik, a refugee settled in Glasgow, Scotland, has arrived to join his friend Frederik Subei, a filmmaker living in the camps of Calais for three months to document everyday life in limbo for its inhabitants.

The result is Transit Zone, a film screening at global film festivals throughout 2016, and these photographs. 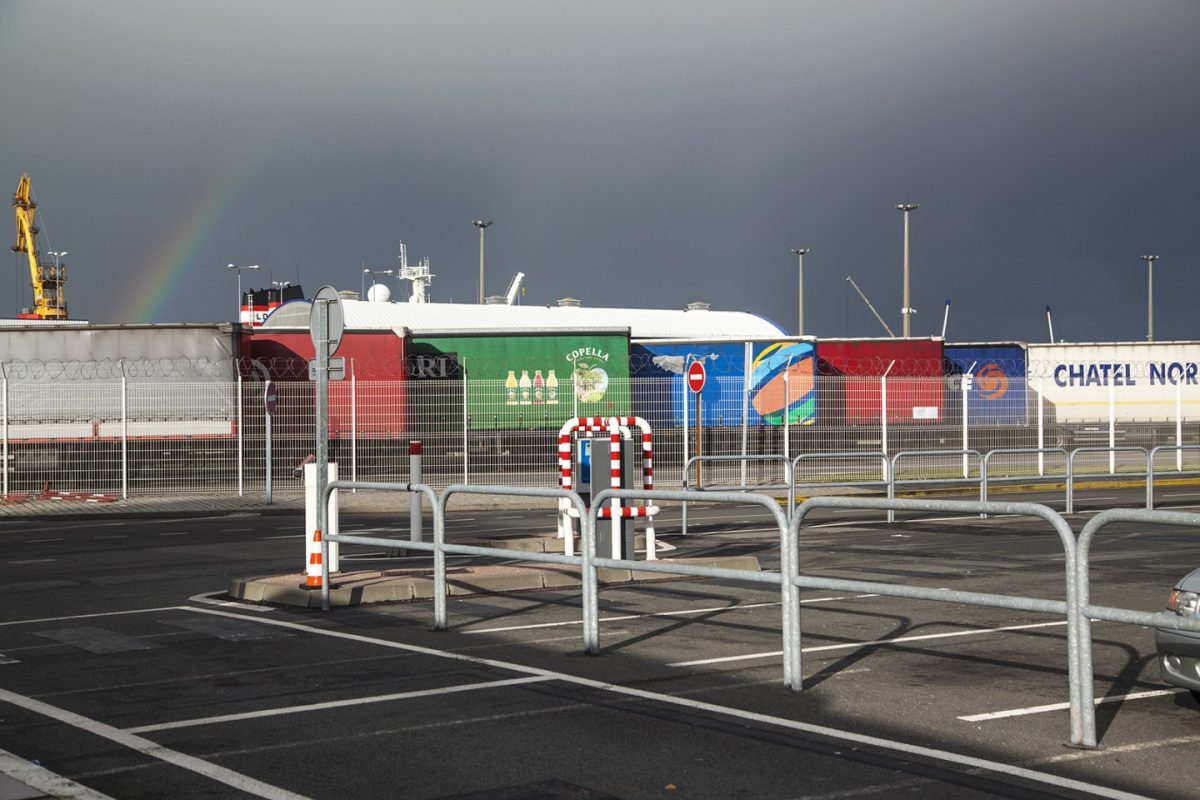 Ferry car park, Calais. Lorries line up, ready to depart to the UK. They’re in the dreams of the camp each night.

Each bright, sloganned rectangle is a vessel that could take them to a better, safer world. 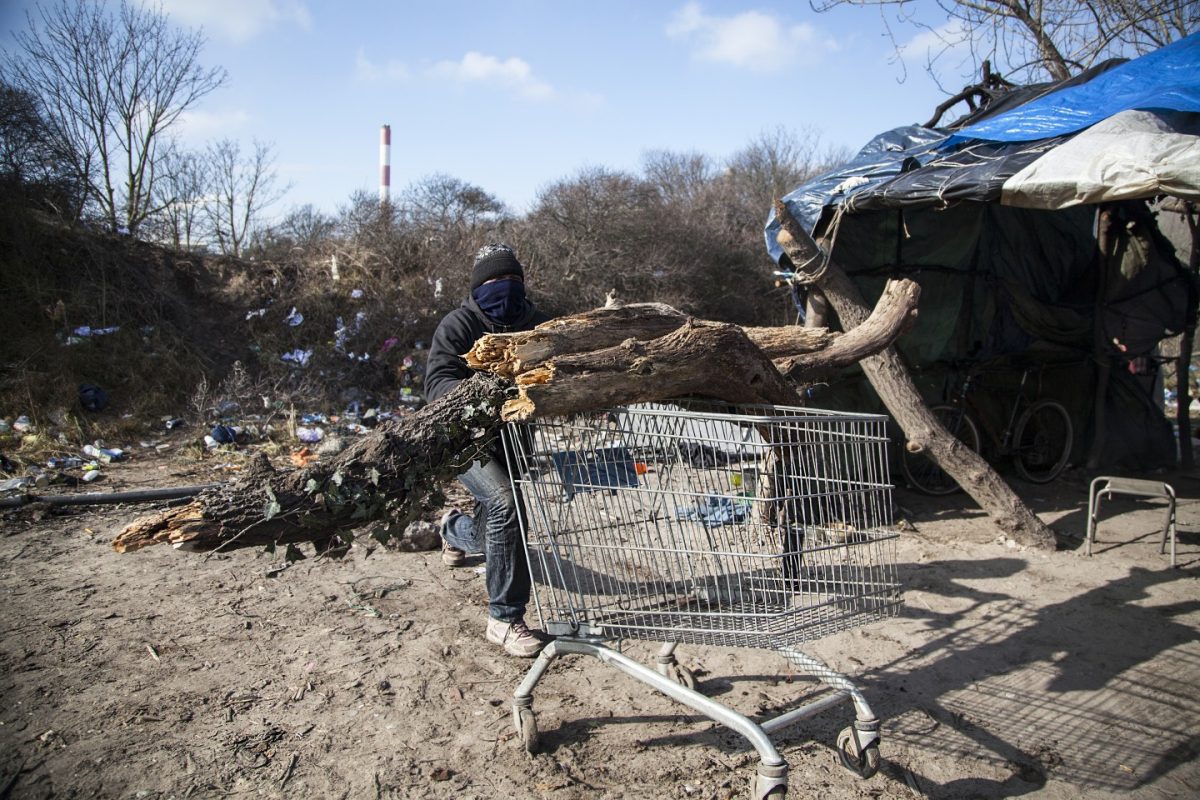 Morning. Iman’s Sudanese neighbour, who lives in the next tent along, collects wood to burn. Every day at 7.30am he rises and works – collecting wood or doing something else for the camp.

He is the unofficial organiser of the ‘social’ tent where the camp’s elders sometimes gather to tell tales.

He also looks out for his neighbours. Once it rains heavily and Iman’s clothes are soaked through, especially his shoes and socks. His neighbour goes out into the camp to search for a dry pair of shoes and brings some back for him. “You cannot get sick here.” 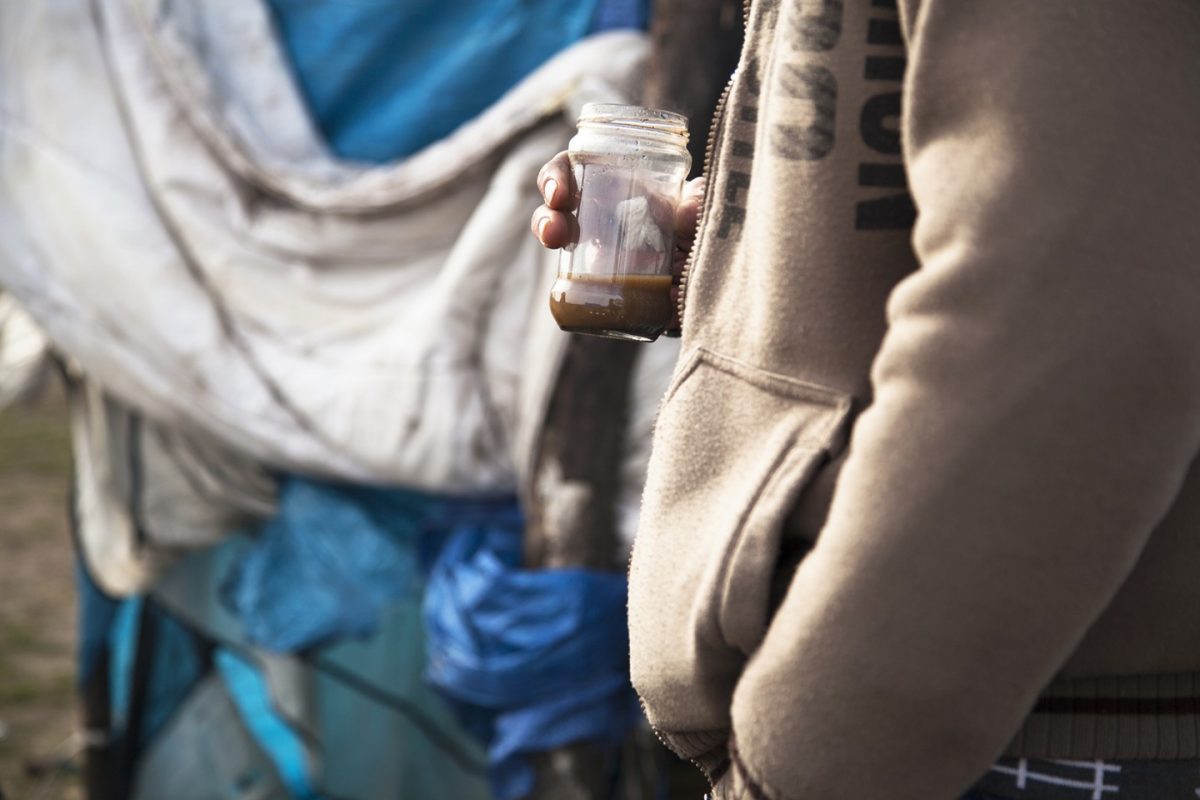 Like anywhere, coffee in the morning is part of the ritual where it can be achieved.

This part of the campsite is mainly populated by Sudanese and Eritreans, Muslim and Christian, who rub along together. 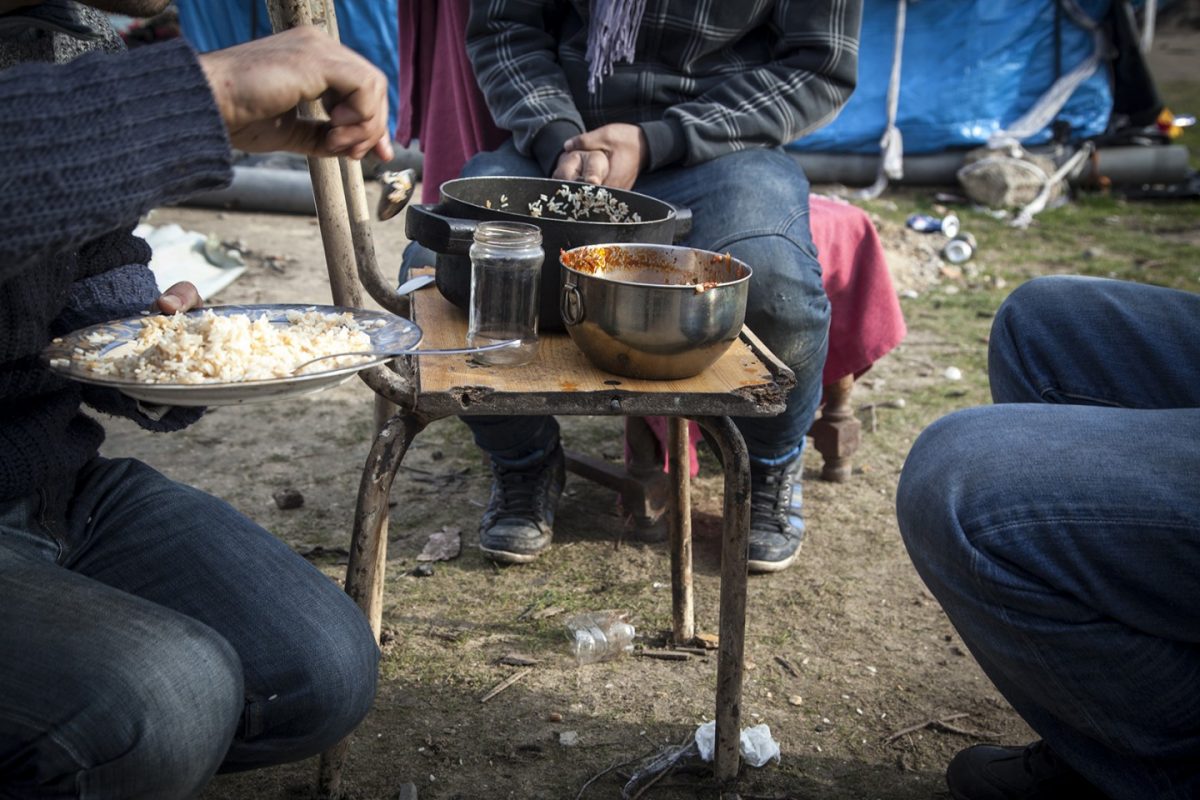 This meal of rice and beans is a luxury for the camp. Ingredients tend to be potatoes, onions, tomato paste. Pasta with sugar is also popular.

Not much else is around. Nonetheless a culture of hospitality prevails.

Even when food is scarce, camp dwellers will often cook extra and ask others to join them. 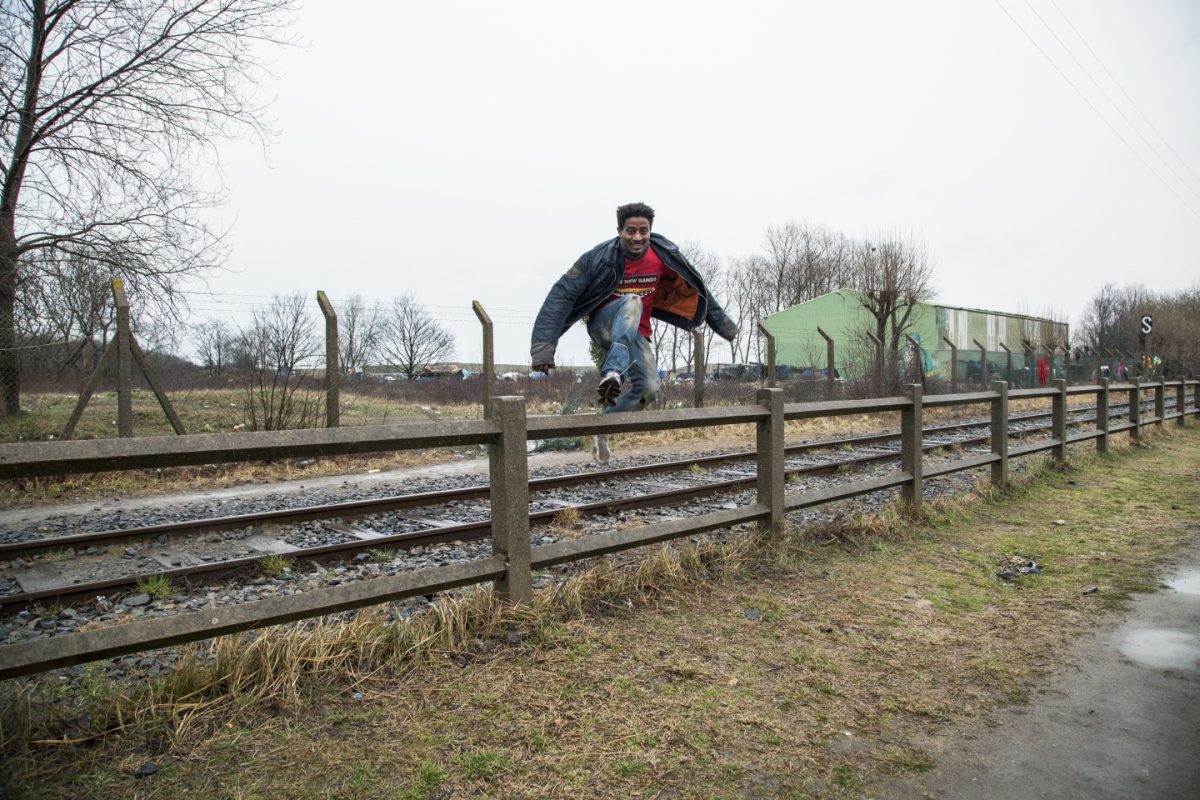 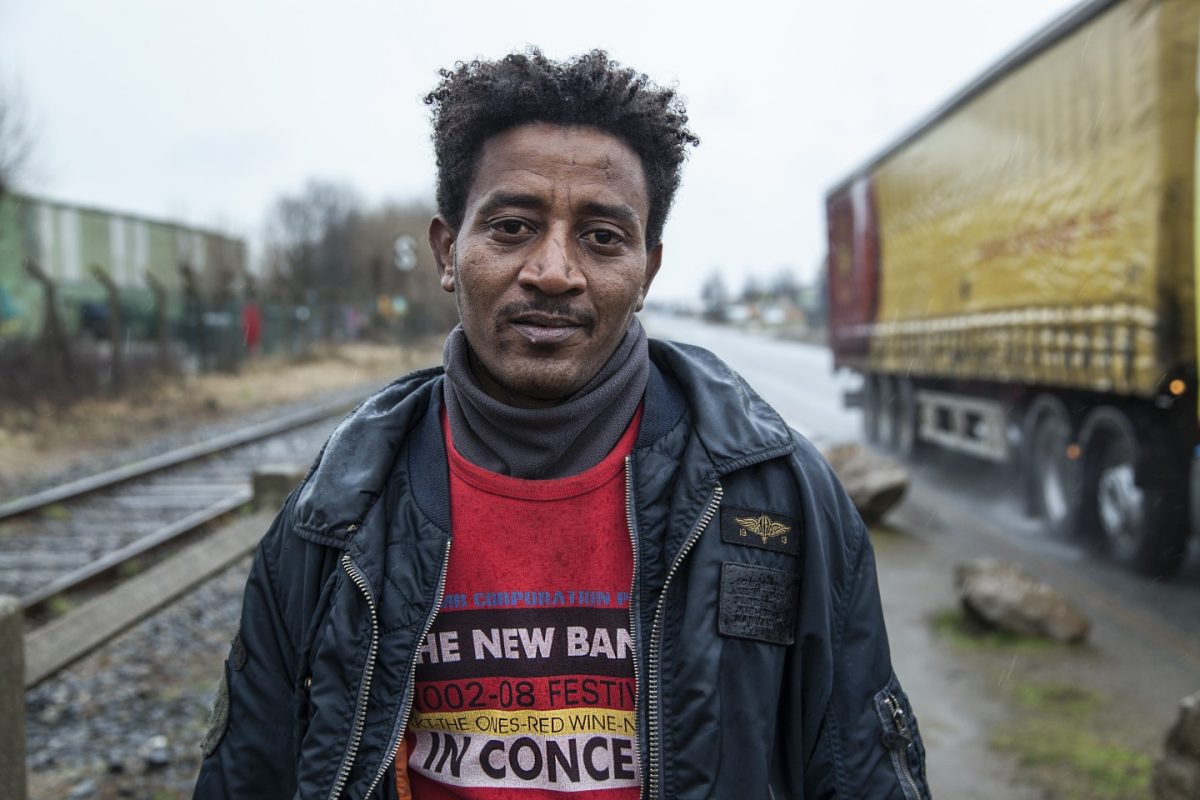 This Eritrean man calls Iman over to take his photograph. Most people do not want their faces photographed – but he wants to be photographed and explains that he is a runner, an athlete, back home.

He is also one of the longest-serving inhabitants of the camp, with his own room rather than a tent or shelter. 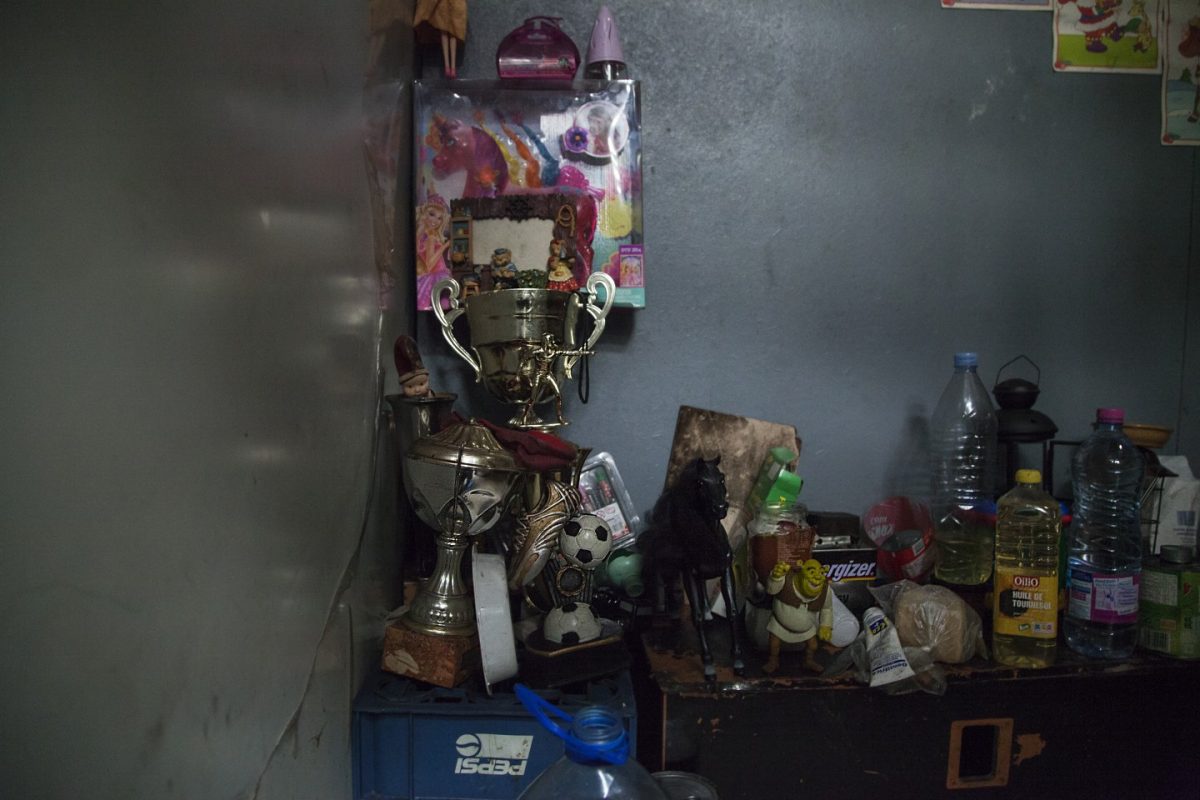 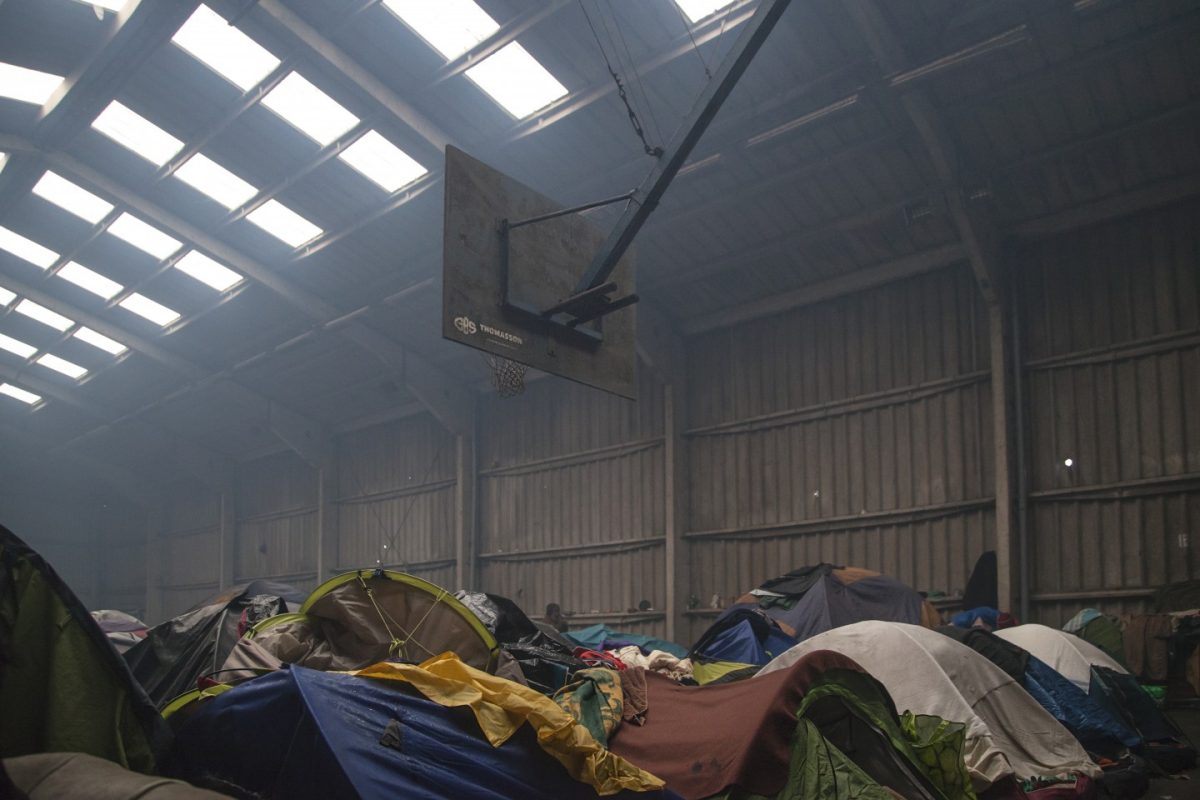 His room is tiny. It is off a huge hangar that plays host to hundreds of tents, spread like mushrooms across the floor, below indifferent basketball hoops.

The huge space is peppered with fires and acrid smoke always lingers in the air. There is only one small half door as entrance and exit for everyone.

Sometimes at night there is shouting, but there are no fights over pitches for tents. Somehow a system has emerged. 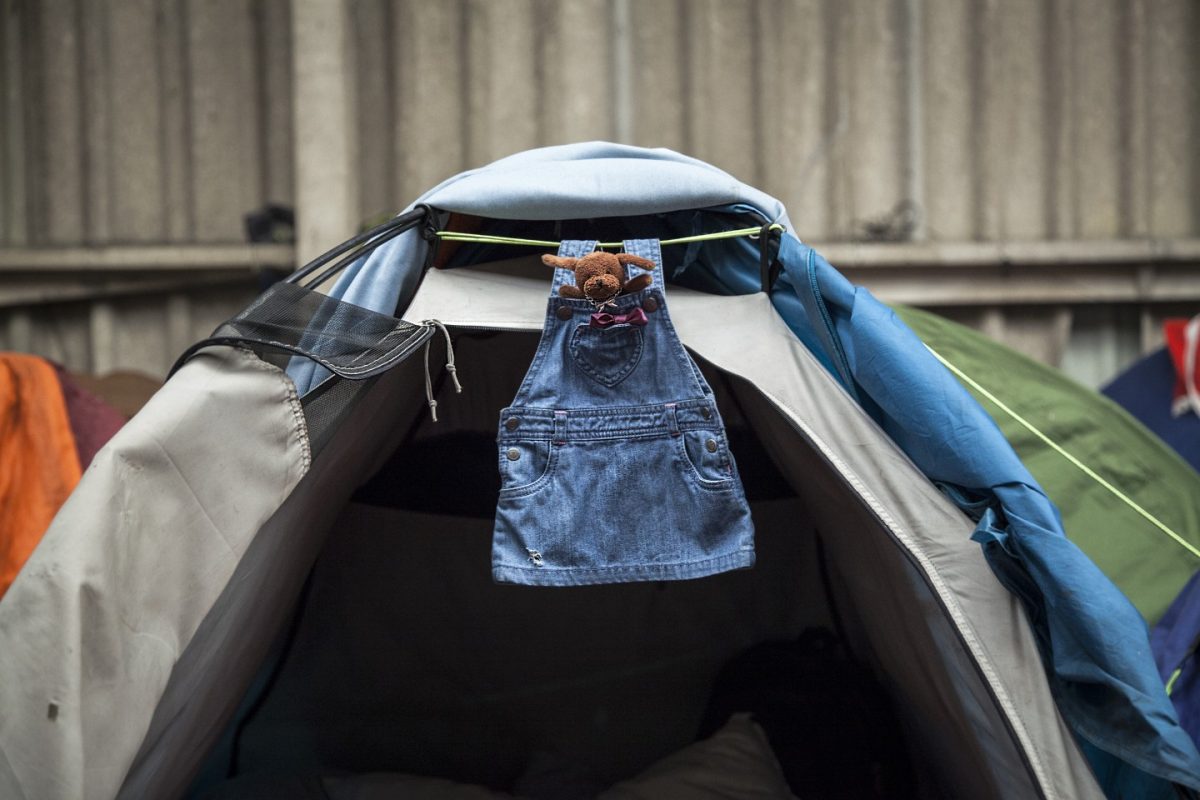 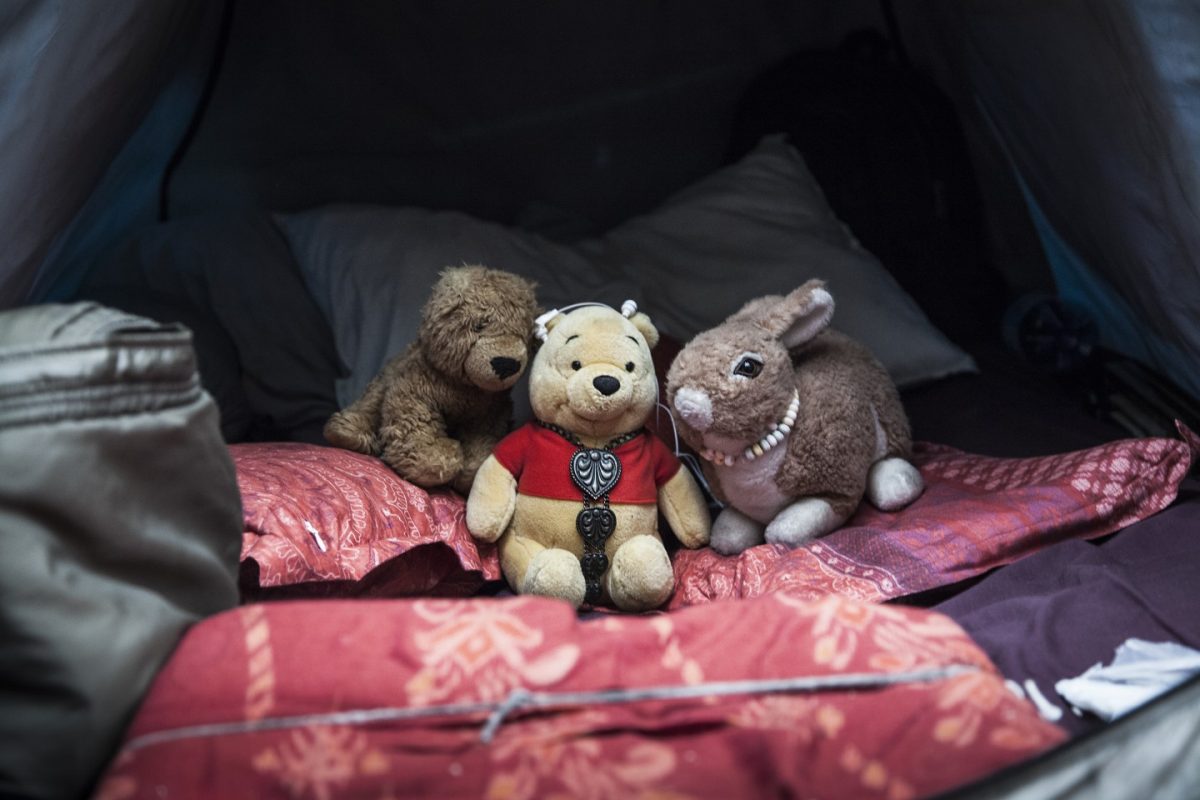 This tent belongs to another Eritrean man.

He had to leave his daughter behind but cannot forget. He misses his children so much, he says, he can’t stop thinking about them. 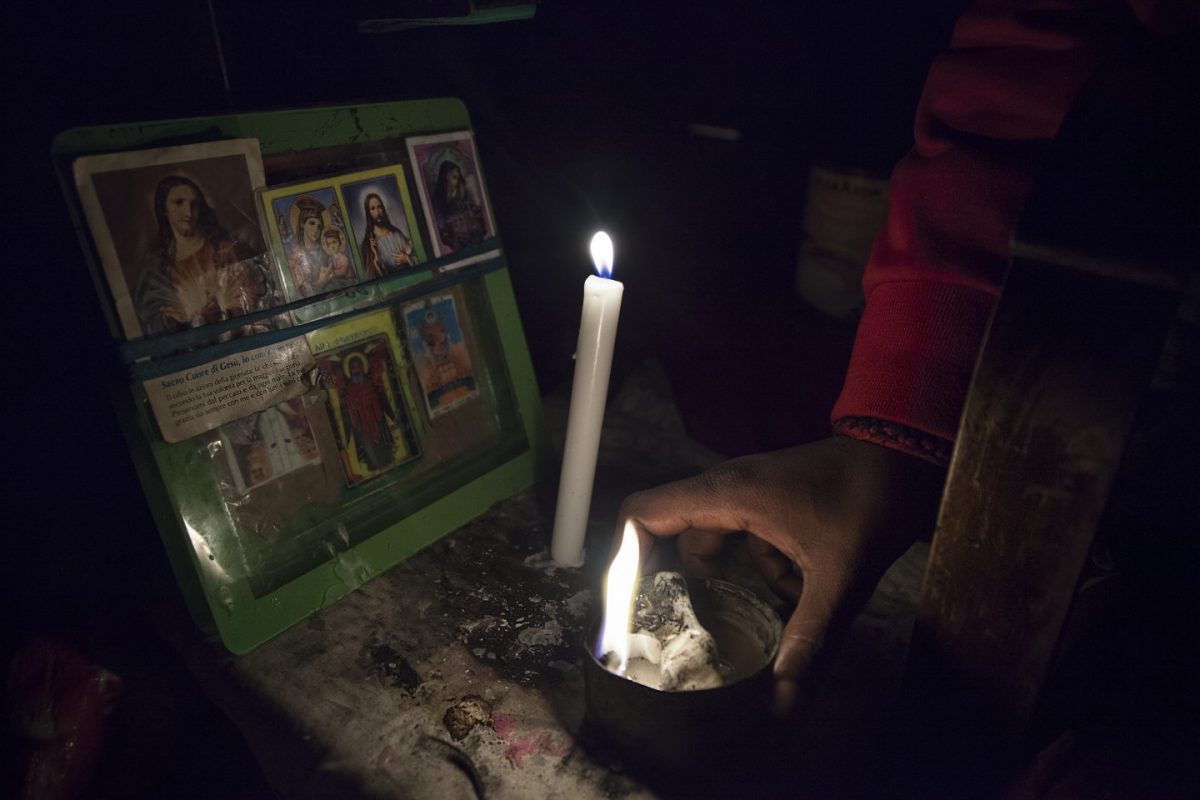 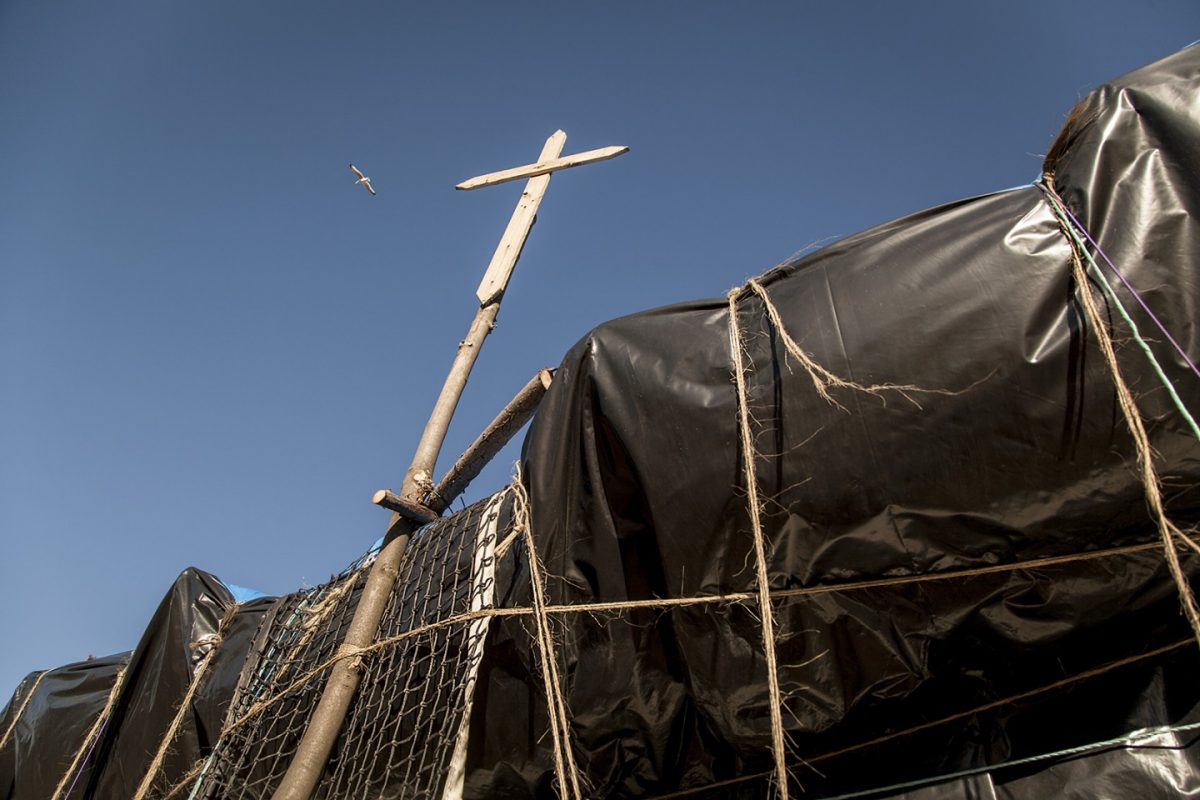 A small shrine is set up inside the hangar. Private prayers can be offered here.

There is also a church that residents built so that they can worship.

Music is played for hours on end, drums and singing.

White sheets become robes. There is a sense of recharging.

Here they pray to cross the ocean safely, and for their families. 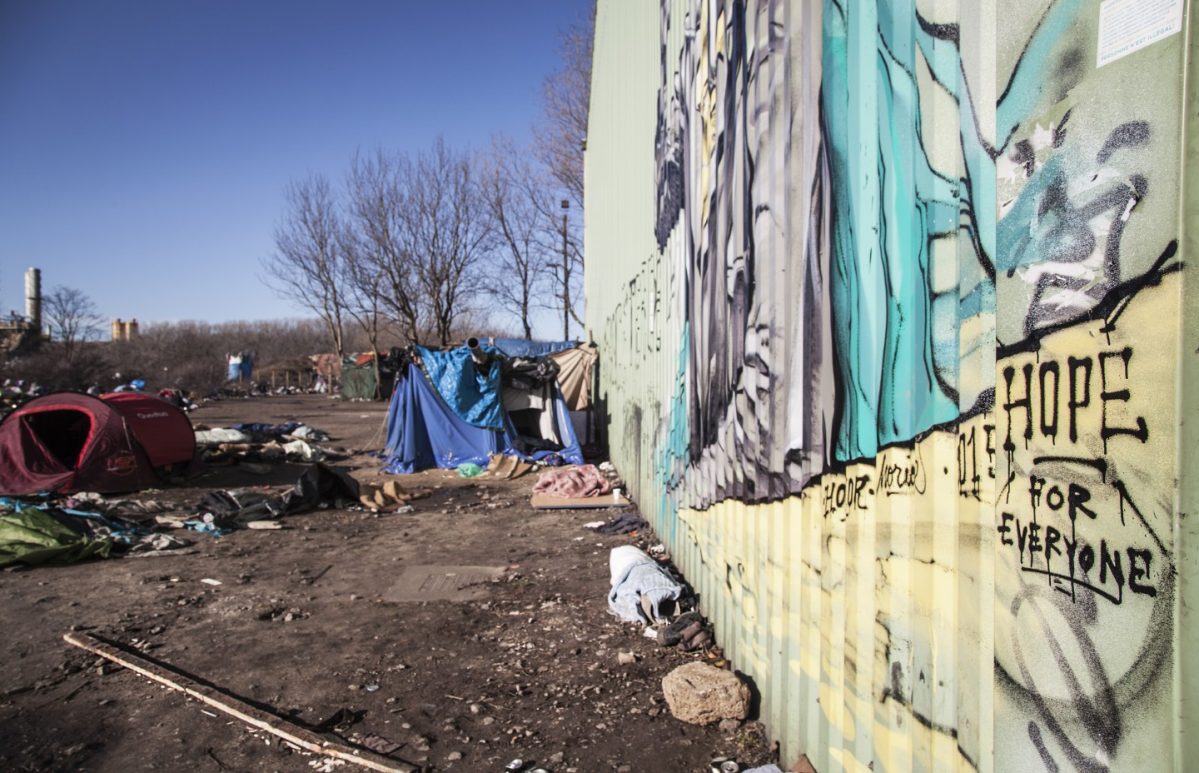 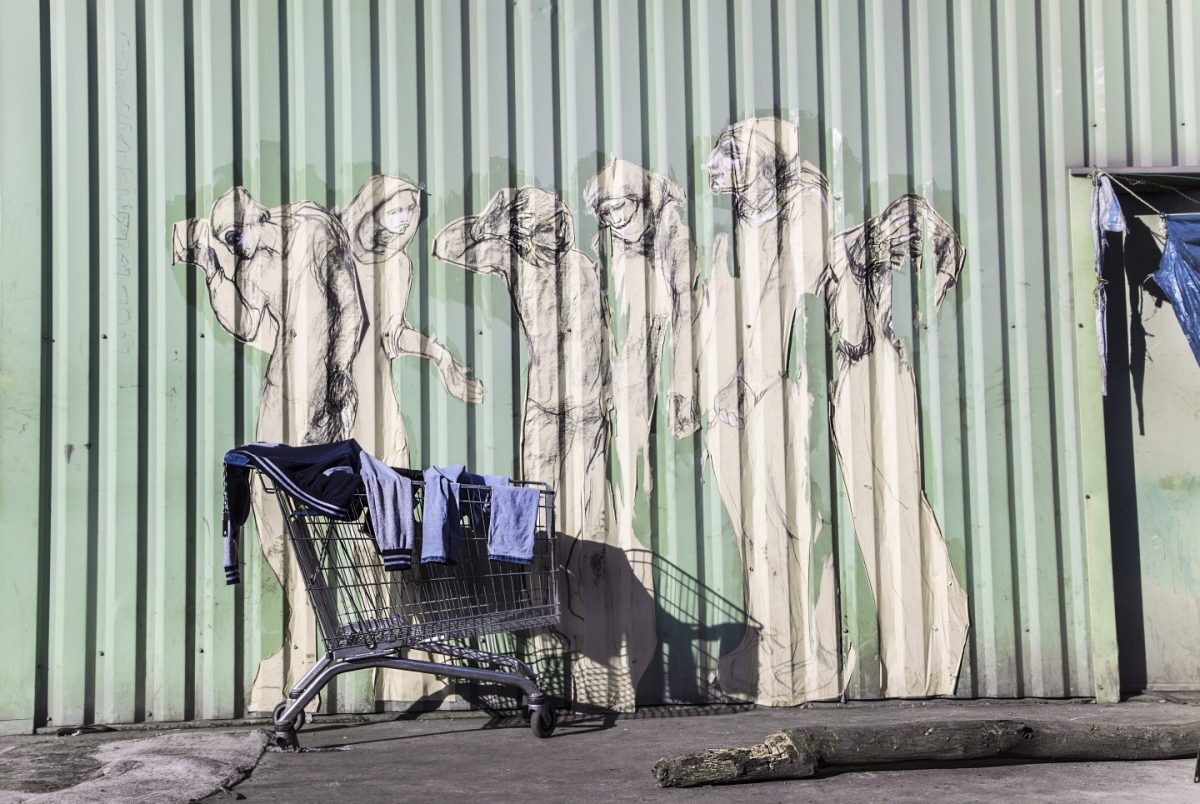 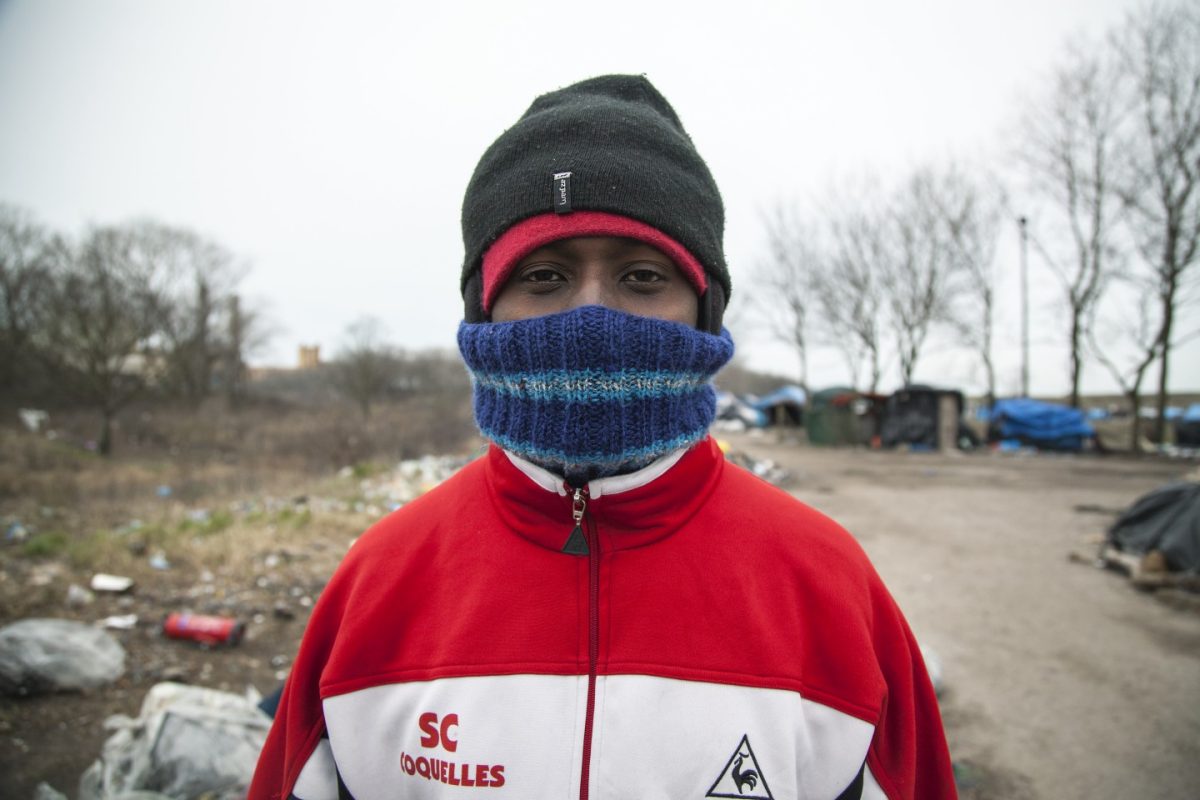 Teefa is Sudanese and has at this time been in Calais for three months, and he is considered one of the more experienced residents. His dream, since he was a teenager, has been to come to England.

Because of his country’s colonial past he thought that he would be welcome, but disappointment followed disappointment. Since this photo he has given up on his English dream and applied for asylum in France. 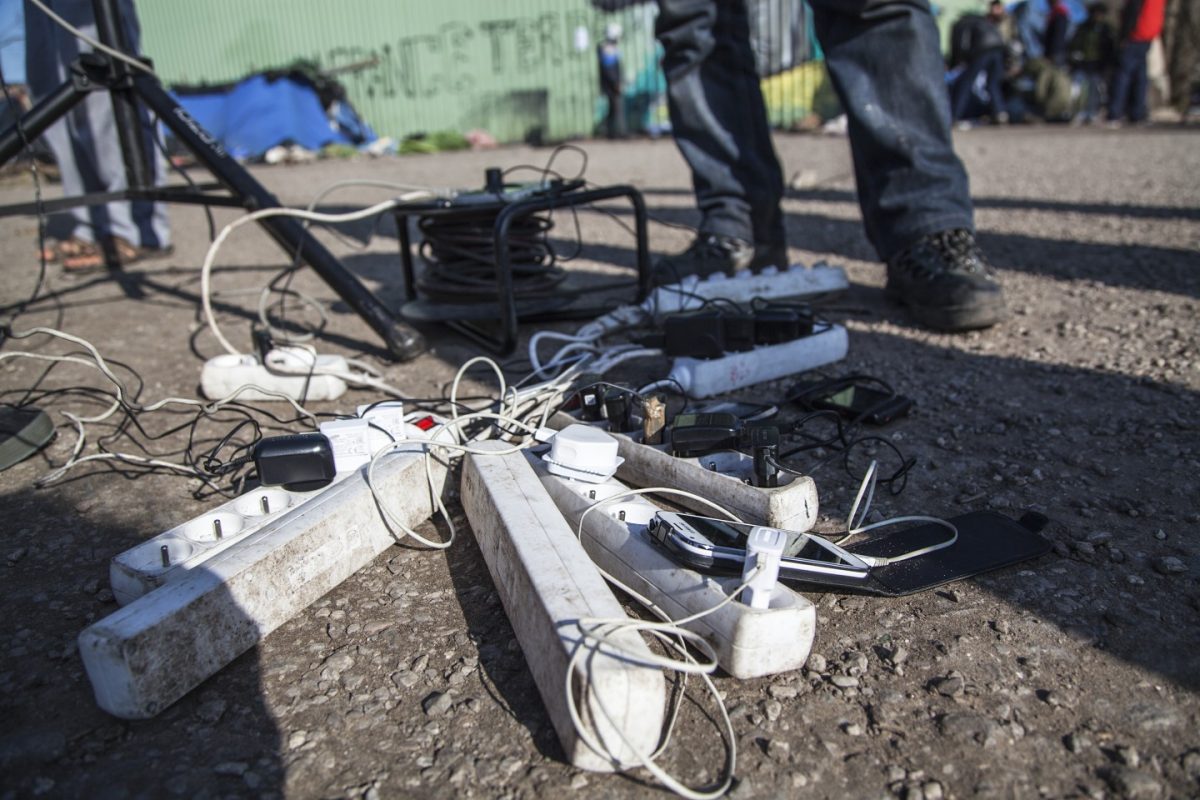 One day a French man brings treasure. Donations of clothes and other practical gifts are gratefully received, but he has brought a generator. Everyone scrambles to charge their phones and to play music.

The sun is shining brightly, and people bicker amicably about which tunes from home to play or whether to switch to pop. They play football. It’s a good day. 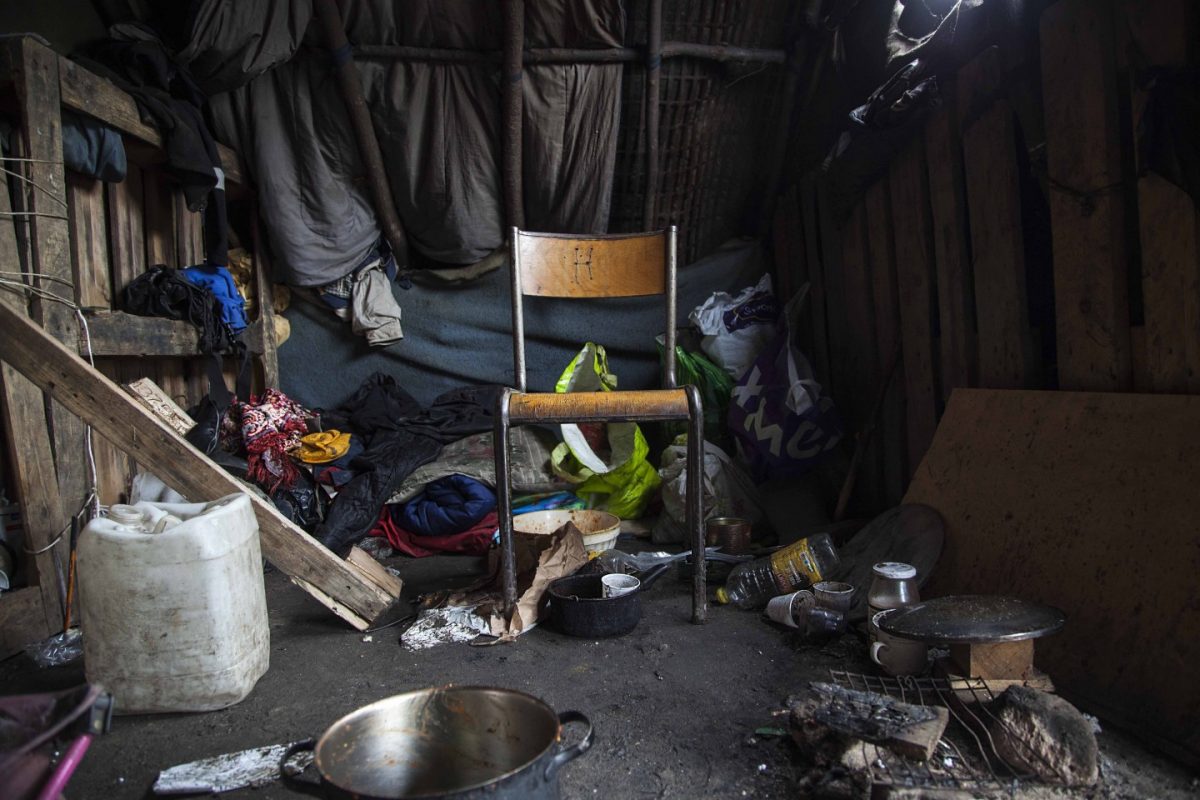 This is a tent where Sudanese people were staying, but people switch tents sometimes, for a change, or to help someone who has a particular need. Ropes are tied around tents to keep them steady against the strong winds.

Blankets are used for insulation, and part of a wooden palette can be seen – these are like gold in the camp because you can burn them, or you can build with them. They are currency. 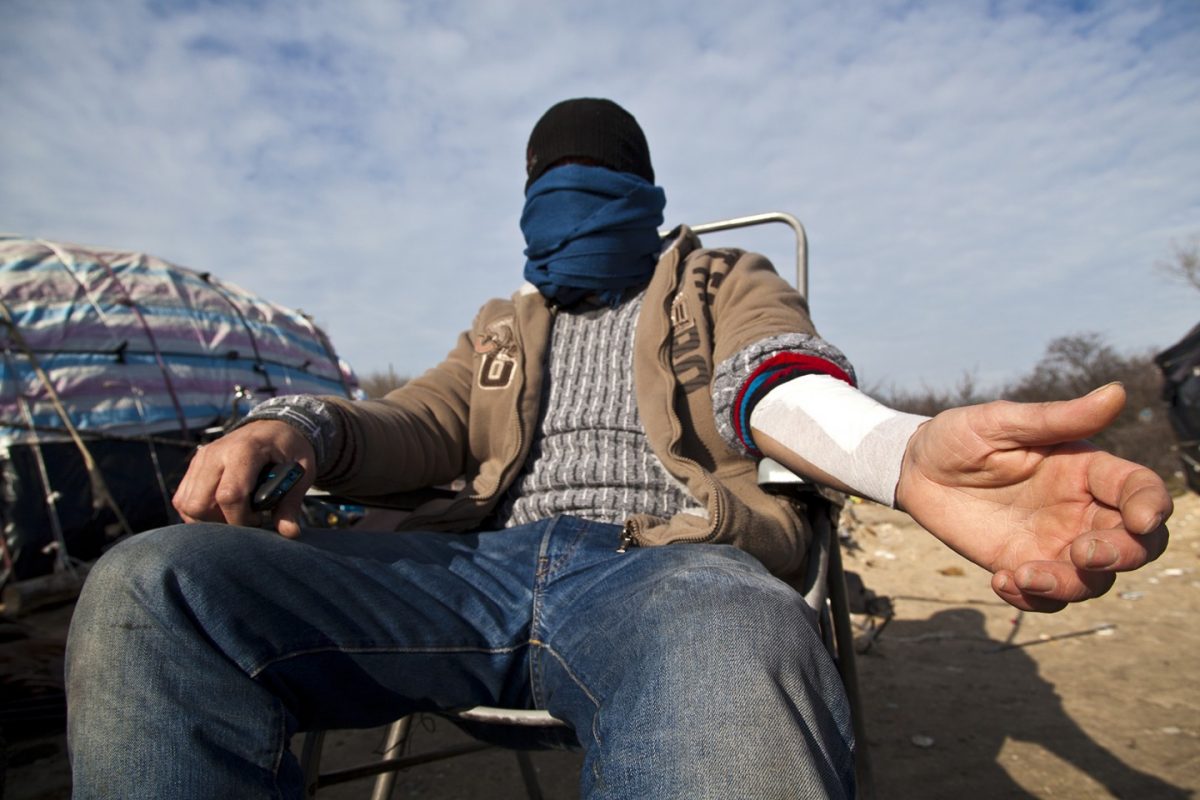 This Egyptian man left the camp with friends to try to find food. They were returning by road and a driver tried to run them over.

He has scars across his arm from throwing himself onto the wall of a nearby bridge to avoid the car. 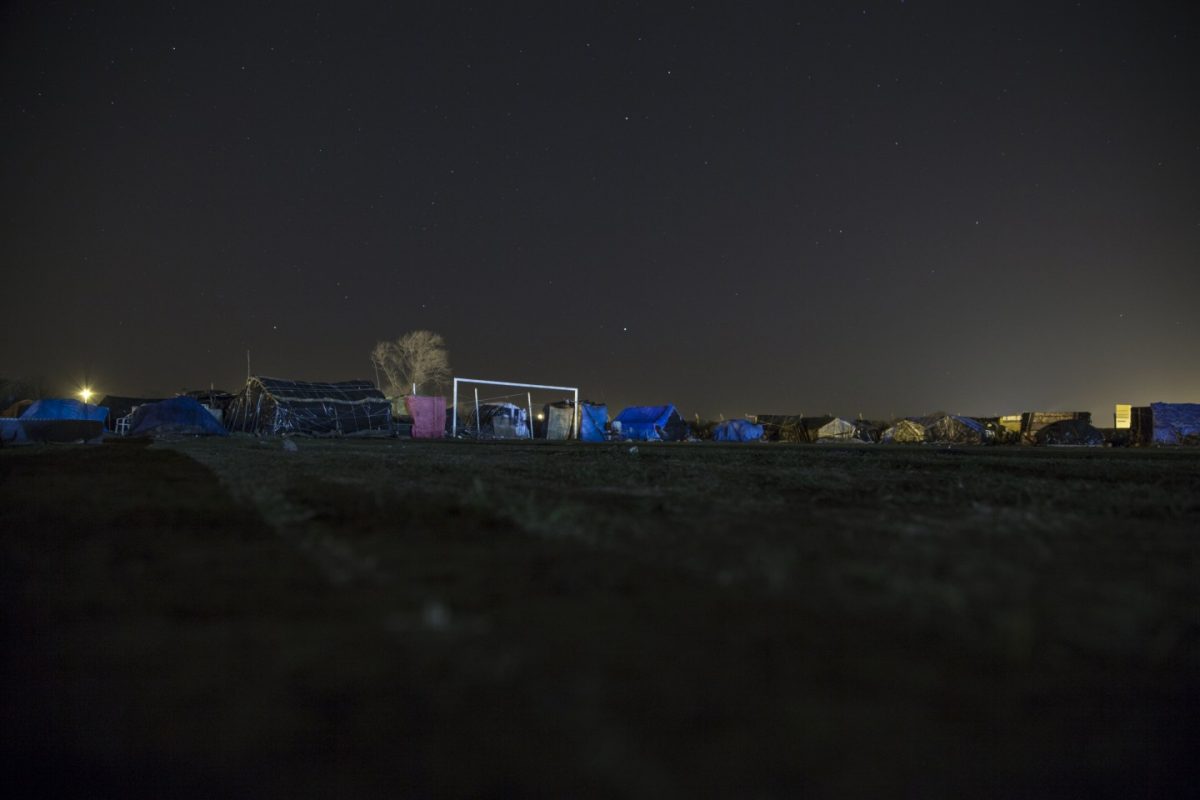 Night over the football field. There is always smoke in the air and the smell of chemicals from nearby factories and refineries.

A constant low buzzing sound hovers in the background. An orange glow is ever present in the sky.

Early in the morning, around 4.30am, a traffic jam builds up. “Dugarat, dugarat!” Shouts echo across the camp, which has its own slang.

This word has evolved, some say from Arabic, to mean ‘traffic jam’. This is a window of opportunity, a chance to find a way across to the other side. 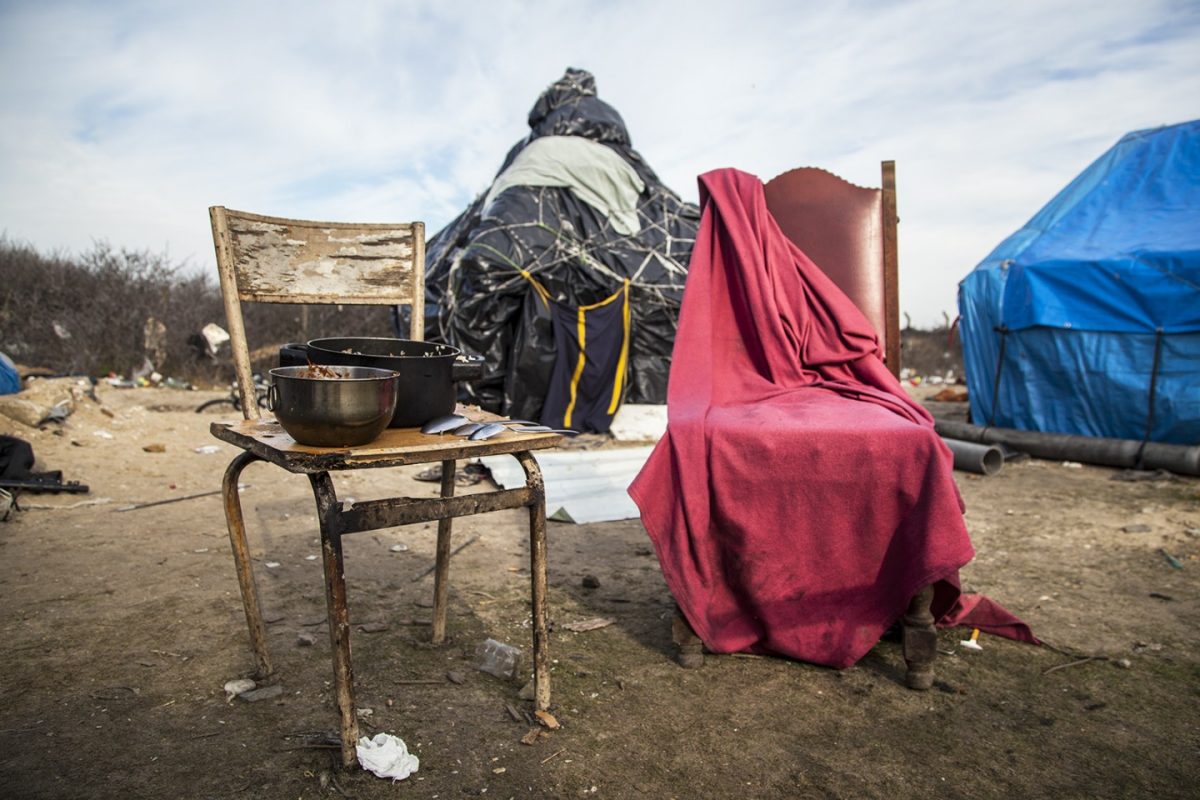 This is a place where people gather together, there are seats. There are never enough to go around, but those who have one will usually offer it up gladly.

The ground is too cold and wet to sit on, but when the sun is shining, people like to gather and talk about the past and the future.

March 2016. Now, these people are being evicted.

This makeshift city, with tent restaurants selling meals at 1.50 Euros a pop, football games, music and tears, is being demolished.

This temporary community, with its hopes and its small comforts, is to be dispersed to an even more uncertain and unfamiliar future.

More of Iman Tajik’s Calais photographs will be exhibited this summer as part of Refugee Festival Scotland.