Amazon cashes in on public money while workers pay for buses

Amazon received almost £1m in Scottish Government grants this year while agency staff earning just over the minimum wage must pay their own bus fares from Glasgow and work 60 hour weeks in the run-up to Christmas.

2015 was a bumper year for Amazon with the company recording its busiest ever trading day on ‘Black Friday’ last month, selling 7.4 million items in the UK alone, and the retail giant’s profits were boosted further by £984,249 in Scottish Government grants, an investigation by The Ferret has found.

The public cash included £665,000 for the development of “a new fulfilment centre to satisfy demands” in Dunfermline and £224,788 for “training and management development” at the same location, according to a government response to a Freedom of Information request.

Amazon has come under fire for its aggressive approach to corporation tax.

Last year, the company’s UK takings rose to £5.3bn, but the online retailer paid just £11.9m in tax to HMRC, according to accounts filed with Companies House.

Amazon has also faced questions about working conditions in the vast ‘fulfilment centres’ that cater for the retailer’s growing customer base.

Dunfermline is Amazon’s largest UK centre and many temporary staff are currently being bussed in from Glasgow and Dundee.

Workers claim this is because the local Fife workforce has been exhausted by long shifts and demanding targets for ‘pickers’ in its huge warehouse, which is the size of 14 football pitches.

“You can only work at Amazon for a few months before you turn into a zombie ,” one recent former worker said.

Another employee said that he had to leave home in Stirling at 6am each morning to catch a special bus to Amazon in Dunfermline.

The buses are run by private companies with workers having to pay their own fares, typically around £10 a day.

Staff are not paid travelling time for up to 80-mile daily round trips.

Many workers in Dunfermline said they were working “compulsory overtime” and doing 60-hour weeks in the run-up to Christmas.

One claimed that he had been reprimanded for being three minutes late on his lunch break, and, another, that he had been docked a half hour’s wages for returning from lunch one minute late.

“You can apply to get it back but it takes ages and nobody bothers,” he said.

In response, unions have called on the Scottish Government to do to more to improve working conditions at Amazon centres in light of its funding for the firm.

“Scottish Enterprise should be putting living wage and guaranteed terms of conditions as part of any grants,” said Jim McCourt, of the Inverclyde Advice & Employment Rights Centre.

“We don’t take any steps to protect these people.”

It is essential that in the future grants, subsidies and other forms of state assistance are withheld from employers with demonstrably bad track records Stephen Boyd, STUC

Stephen Boyd, STUC assistant secretary, said: “The Scottish Government has made significant progress over the last in developing its fair work agenda.”

“However, if this is to lead to genuine improvements in low wage, precarious employment it is essential that in the future grants, subsidies and other forms of state assistance are withheld from employers with demonstrably bad track records.”

“If these allegations are true, then this is clearly a huge concern and flies in the face of the warm words we hear from the SNP Government about promoting fairness at work.”

“Amazon are being supported by Scottish taxpayers yet pay little tax in our country and now seem happy to bus in agency workers rather than provide jobs for local people as they promised.”

Hilton said she had seen buses ferrying workers from outside Fife to Amazon in Dunfermline since the Forth Road Bridge closed this month.

She said: “I’d like to know why it is that when thousands of Fifers are out of a job, Amazon are bussing in workers from elsewhere?”

Amazon declined numerous requests to comment on this story.

The vast majority of the Amazon workers The Ferret spoke to wore green ID cards, which denotes they are agency workers.

These agency staff are paid as little as £7.20 an hour.

Only a handful of the staff we met sported the blue badges that designate permanent workers.

“A company with the resources of Amazon don’t need to use an agency, they could just hire them but they don’t ,” said Jim McCourt, of the Inverclyde Advice & Employment Rights Centre.

Amazon recruited heavily in the months before Christmas.

In Dunfermline, existing workers were given £25 bonuses for every friend that they encouraged to take up a job in the warehouse.

At its Gourock site, the core workforce of 350 has roughly doubled.

Once the festive rush ends, the vast majority of these agency workers will lose their jobs.

Amazon has received at least £7.54m from the Scottish Government since 2004 , including at least £2m to build Amazon’s other major Scottish centre, at Gourock.

In 2015, Amazon was given almost £900,000 in grants from the Scottish Government to develop its Dunfermline centre.

The previous year, the company received £355,000, also for work at Dunfermline.

Amazon’s relationship with the Scottish Government dates back over a decade to the previous Labour administration in Holyrood.

In February 2004, the company was given £1,655,000 by Scottish Enterprise under the Regional Selective Assistance scheme for their Gourock centre.

Over the next 18 months Amazon received a further half a million pounds under the same scheme, for planned projects in South Queensferry and Glenrothes. Since then, the retailer has been given more than £5.35m for a range of projects, including some of the costs of the fitting out of a customer service centre at Waverley Gate in Edinburgh.

Then First Minister Alex Salmond officially opened both the Edinburgh and Dunfermline centres in 2011. 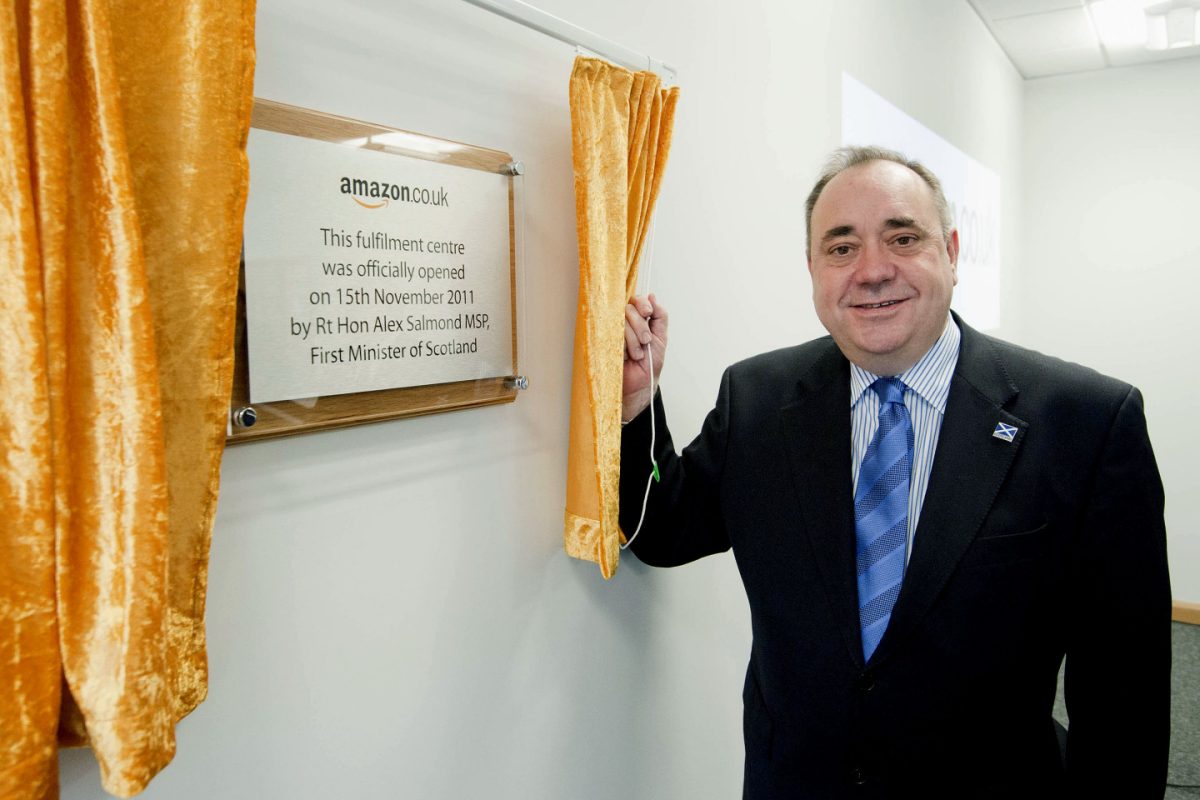 Alongside multinationals such as Google, Facebook and Starbucks, Amazon has often been accused of aggressively avoiding tax on its profits.

Although Amazon recorded sales of £5.3bn in the UK last year, these sales were taken through a wing of the company based in Luxembourg, widely seen as a tax haven.

As a consequence, Amazon UK Services Limited recorded a turnover of £679m from “fulfilment and corporate support services” to Luxembourg, leaving the company with a UK tax bill of just £11.9m.

The company has long denied that its corporate structure is designed to minimise tax. Earlier this year, Amazon announced that it will now book British sales in the UK, a move that should see its corporation tax payments increase.